Just about every year since I began geocaching (2008), on or about the July 4th holiday, it has been a personal tradition—nay, a personal requirement—to celebrate my freedom to scrawl my John Hancock on the log sheets of as many hidden little containers as a satellite signal will guide me to. Today was no exception, with an entertaining venture into the forgotten wilds (i.e., at least ten miles from the nearest wine bar) of Forsyth and Davidson Counties, with caching partners Bridget (Suntigres) and Gerry (BigG7777). Most caching outings are fun; this one was memorable. Mainly, today I found cache #9,500, which means I have a mere 500 to go before the big 10K. Later this year, perhaps...?

One of our first targets was a cache that has daunted me for years, titled "Green Series Cache: Not a Purple FOB" (GC2TDF5). It was hidden in 2011, and not long after its publication, I had attempted to find it, but without success. The location is something else: a dense thicket near a megachurch that attracts thousands to its services (I know—I've been there on Sundays thinking to hunt the cache, but the sheer number of Christian soldiers marching about the location have dissuaded me). Today, however, apart from someone who appeared to be learning to drive around the church parking lot, no one else was present and we were able to make our way to Ground Zero without having to avoid countless, devastating barrages of humanity. Inside the thicket, which can only be entered by hacking one's way through tangled curtains of poison ivy, sheer walls of briers and brambles, and a veritable moat of quicksand, one will find a decaying tobacco barn—roofless, tottering, and home to lord knows what varieties of critters. How I missed finding the cache on that long-ago attempt is a mystery, for today, once having braved the thicket and entered the old structure, locating the container proved relatively simple. Signing that log was a most satisfying accomplishment after a long and rather trying spell on the home front (don't ask). 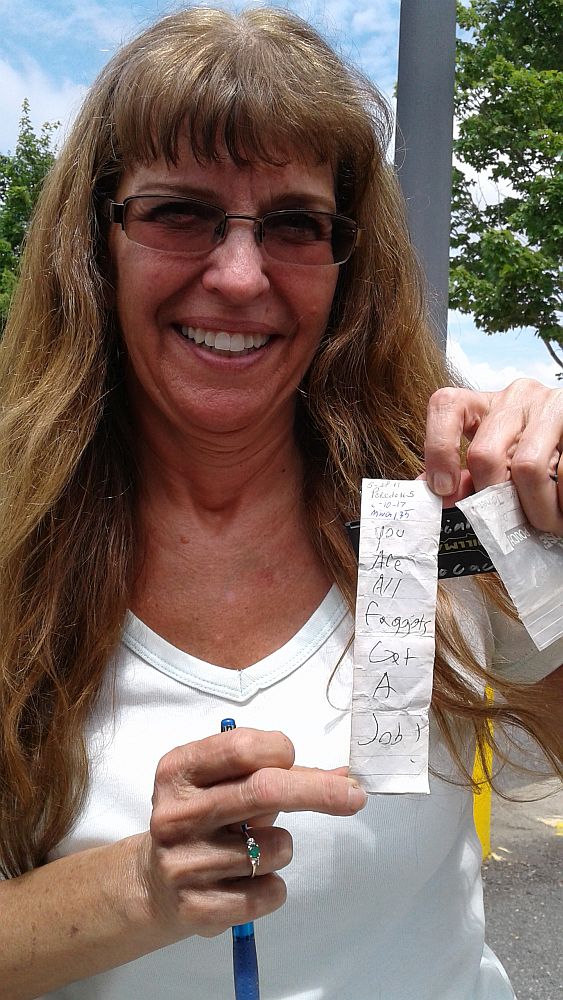 From the perspective of someone who has found 9,500 geocaches, I'd say it's rare to come upon cache logs containing anything other than the signatures (and occasionally a few personal observations) of past finders. Today, we found a couple that were hardly positive in nature but that provided a few chuckles. One cache, which resided at the base of a light pole in a busy parking lot, contained a log with an entry that read, "You Are All faggots Get A Job!," obviously inscribed by a non-geocacher, a.k.a. muggle, who had happened upon the hide. At least this semi-literate soul had the decency to use the cache log as a medium to communicate his deepest thoughts rather than simply make off with the container, which is the far more common behavior among muggles.

At another cache, which was unwisely hidden at the base of a stop sign located at the corner of someone's front yard, we found in lieu of a logsheet a note from an unhappy property owner advising the hider of the "game piece" to contact George at a certain address and/or phone number because he was interested in having a "chat." We did find this amusing in its way, but we also recommended that the container be removed and the geocache listing be archived. However unsporting, the property owner was clearly within his rights to take issue with the placement of a container of which he didn't approve on his land. Cache hiders take note!

And then there's the throw-down—the replacement of a presumably missing cache by a hunter, whether with or without the permission of the original cache owner. Throw-downs are frowned upon by most in the geocaching community, although there are some cache owners who will give occasional permission (sometimes even giving blanket permission) to replace containers that are obviously missing. I have, on occasion, replaced containers if I have checked with the cache owner (or know in advance the owner will approve), but it is bad personal policy to replace containers willy-nilly just because you can't find them. The local geocaching community does have its chronic offenders in this regard, and we did come upon a blatant example of their handiwork today when we found what was clearly a throw-down, only to find the original container shortly thereafter. True, this is a small thing in life's bigger picture, but this same behavior has caused some real-world strife between a number of individuals I know, and a simple focus on personal integrity whilst in the field would almost certainly alleviate the issue altogether.

Anyhoo, all this made for a day of intriguing geocaching, and at this particular time of life, that kind of intrigue is just my speed.
Because there was also cache there, we took our lunch break at a nearby Dairi-O, a local franchise that specializes in super-delicious hamburgers, hot dogs, chicken wings, ice cream, and such—including some of the most addictive french fries I've ever tasted. Not even a little bit healthy, of course, but if nothing else, I burned off a fair number of calories and sweated off some water weight in near-hundred degree temperatures today. So yeah, this Fourth of July fit comfortably into Old Rodan's grand personal tradition. May there be many more.