A Random Story of a Narrow Escape 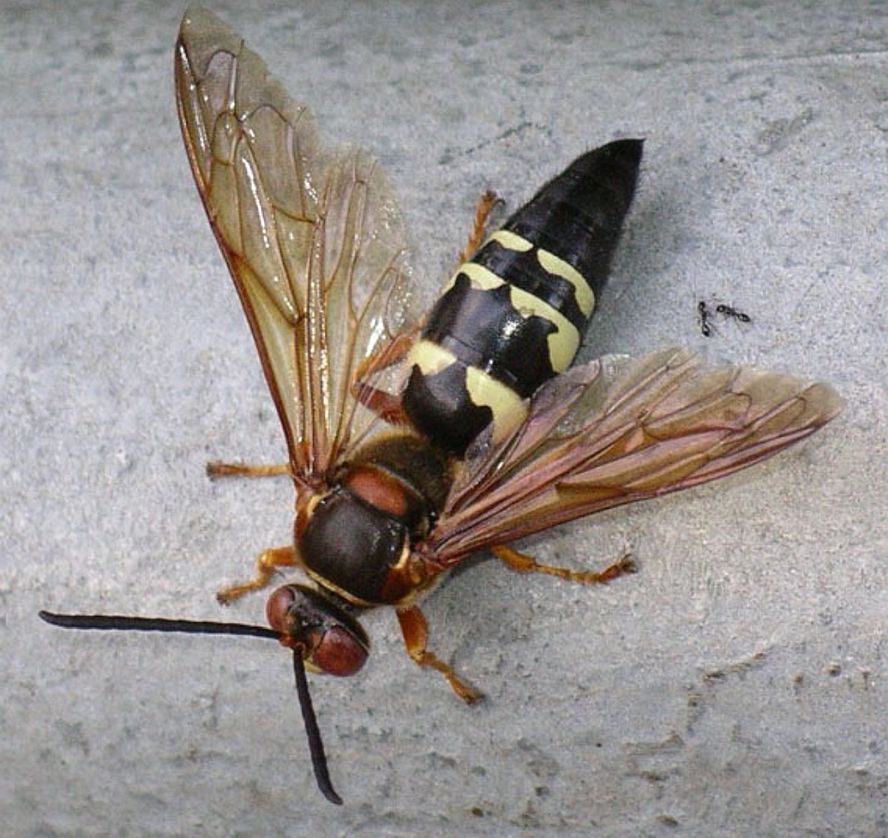 The cheery-looking, sizable winged fellow you see in the photo above is a Cicada-Killer Wasp (Sphecius speciosus). They're about two inches long and pretty common around this area of North Carolina. While out geocaching, I've witnessed them fighting to the death with cicadas, which makes for a fascinating spectacle. Inevitably, barring human intervention, the wasp will win.

Despite the fact I am not a cicada, perhaps my most narrow escape in this life—a decade or so ago—involved one of these ferocious-looking beasts. I had sat down to go potty in the downstairs bathroom of my house and was only just making myself at home when I heard a very loud, very deep buzz-buzz-buzz coming from some indeterminate but uncomfortably close location. After a moment's contemplation, I came to the conclusion it might be coming from under the toilet seat. Very calmly, I stood up, lifted the seat, and—sure enough—there he was, a big old Cicada-Killer Wasp sitting there on the rim of the toilet bowl, looking somewhat peeved.

Now, in general, the Cicada-Killer Wasp is not hostile to human beings, and unless you fuck with one, he probably isn't going to sting you. Still, under these circumstances, a particularly sensitive wasp might consider himself being fucked with. As much as I regret doing so, I killed him graveyard dead on the spot, but under the circumstances it was inevitable that this encounter was going to end badly for one of us. I confess I have never been able to shake from my mind the resulting unpleasantness had things gone the other way.

That is all.
Posted by Stephen Mark Rainey at 5:58 PM

I don't think 'fuck' is the appropriate verb in this case! :)