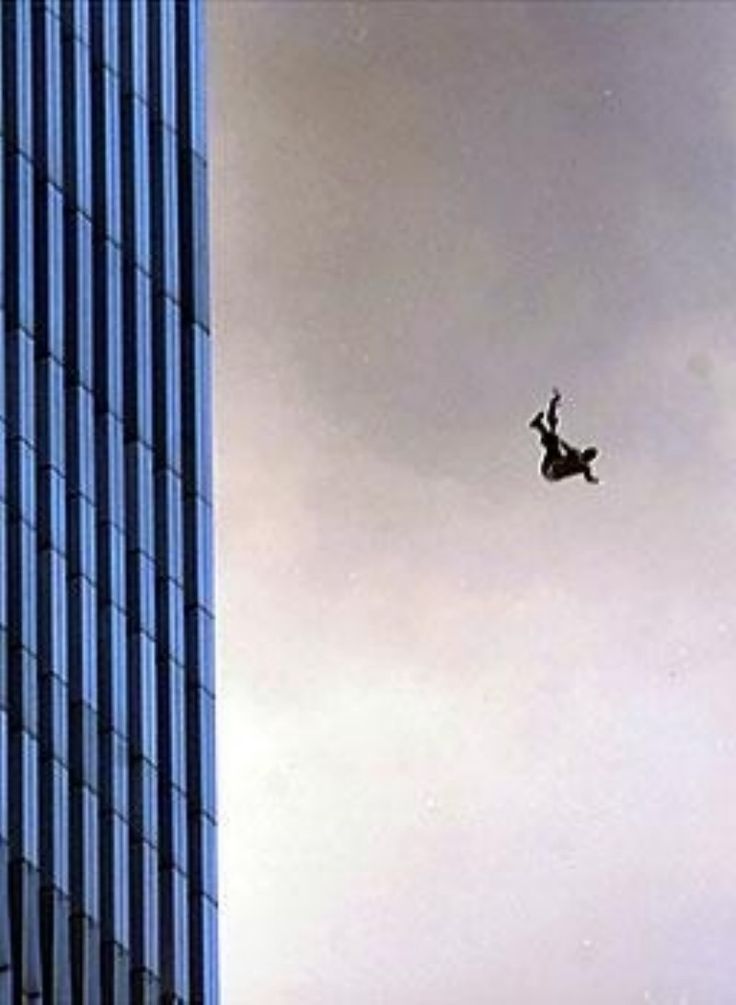 Among the many thousands of horrifying images from 9/11/2001, to me, the most haunting may be those of the individuals who plummeted to their deaths before the doomed World Trade Center towers actually collapsed. There's something about these depictions of people who may have chosen to face a thousand-foot drop rather than a thousand-degree inferno closing inexorably on them that hits me in the gut unlike any other. Until relatively recently, I never suspected that among the living—other than the inevitable lunatic fringe—there might be some stigma attached to these victims of such unimaginable horror.

And even now, I'm certain that many of the articles about these victims that have come out in the interim—specifically those that highlight reactions that run the gamut from plain denial to moral condemnation—are based more in sensationalism than genuine insight. To the best of my knowledge, I don't know a soul—I hope I don't know anyone—who would righteously claim that these people who jumped or fell were somehow culpable, that they might be eternally condemned because they chose the coward's way out. That they committed the unforgivable sin of choosing their own door to the great beyond. For the loved ones of those who fell, I'm sure it's easier to not think about the choices that might have been made that day. If it were my daughter, my brother, my mother, who died in such fashion, I don't know how I would feel, how I would deal with my own emotions. I do know that I could never cast any blame on them, whatever my spiritual beliefs. No more than I could cast judgment on any stranger in the same situation. Some of you reading this probably lost individuals close to you on that day. I did know some who died, though I cannot claim to have been close with any of them.

But the fact of it is this: every soul who perished in these incidents of 9/11/2001 was a victim of murder; nothing more, nothing less.

Some stories have highlighted not just a lack of understanding and acceptance among the living, but actual judgment against the "jumpers," for want of a better term. Again, I can't speak with any authority as to whether we're talking about a relatively minuscule number of misguided individuals or a broader trend among those of various religious denominations. But I can't imagine a more egregious violation of the edict "Judge not, lest ye shall be judged," most notably because not one living soul can know what was happening in those moments prior to an individual taking flight. Some of these, clearly, were forced by the sheer weight of numbers of those trying to escape the rapidly spreading flames. Some appear to have blundered, blinded and deafened by the force of the plane's impact, into the gaping abyss. And others clung, until the last possible moment, to life and hope, until it was clear that, within seconds, fire would consume them.

How would you react? Would you not panic? Would your body not involuntarily propel itself toward anything but the inferno roiling toward you? The body tries to survive; that's an inherent part of its mechanism. Personally, I'm all for having a choice when death is inevitable. Death is part of the journey we all undertake, and each of us must face it privately and, inasmuch as possible, in keeping with the beliefs we have carried with us through life.

How dare anyone who hasn't faced that fire for the final time cast judgment on someone whose life is destined to end in a matter of moments, whichever choice he or she makes. Anyone so conceited, anyone whose faith—whose primitive, simple-minded belief—assures them that someone else made the wrong choice about dying is precisely the same as the sick bastard who believes that in destroying the infidel he will find 72 virgins in his heavenly domicile.

Death is between an individual and his god, if he has one. I sure as hell have never followed—and would never follow—one who would condemn me for eternity because I chose ten seconds of flying toward physical obliteration over the flame rushing in to consume me. What an awful, horrendous, ungodly conceit—and as far as I'm concerned, a purely human conceit. There's nothing holy about living in such a judgmental state. It's horror.

The very definition of it.
Posted by Stephen Mark Rainey at 8:23 PM

of all the images from that day ... these are the ones that STILL make my eyes leak

I spent one week a month, for a year, working in the North tower. I cannot imagine this, it's horrifying.