On the Fear of the Other 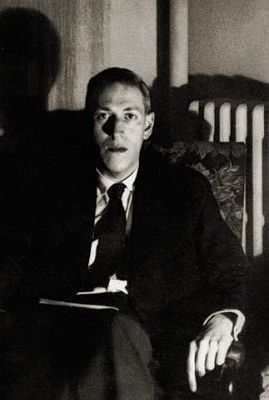 Any literate soul who has read a word of my fiction, or at least taken note of the venues in which more than a small percentage of my work appears, would surely recognize the fact that H. P. Lovecraft's Mythos has been pivotal in whatever success I have achieved as a writer.

Unlike many of my contemporaries, who discovered Lovecraft in their adolescent years, I was well on my way toward graduating college before I read my first HPL story. His name, of course, had been on my radar for many years, and as as kid I had seen AIP's The Dunwich Horror (1970), but it wasn't until a friend gifted me with a slew of those old Ballantine paperback collections—in late 1981—that I read any of his work, and that turned into a binge reading, undertaken over a couple of weeks' time. To say I was captivated is a gross understatement. But as much as HPL's work grabbed me, it was as much the myriad authors whose work appeared in those Cthulhu Mythos volumes—not to mention others I discovered later—that made this particular dark universe all the more irresistible to me.

Over the years, to the best of my knowledge, I've read every word of Lovecraft's fiction that's been published (most of it many times over), his essays, and some number of his letters. For me, his work's most powerful allure was his intimation of a soul-deep dread of the unknown, a fear of the other, that which was not like him—or like us, the "us" being the more-or-less given readership of the day. It was this fear of alienness that struck a nerve with me because, looking back to my childhood days, my first reaction to things I didn't understand oftentimes was fear. To be clear, for me, this "other" tended to exclude human beings, for in my book, people were people, ultimately as mortal and as frail as I, and therefore, however horrible they might be, limited in their potential to instill true terror. It was more the nonhuman life form that filled me with fear—the merciless, unreasoning, primeval predator, such as the shark, the spider, or the snake (or to take it further into the realm of the imaginative, a dinosaur or a Sasquatch or a space alien). Or on an elemental level, a violent thunderstorm, a tornado, an earthquake... whatever unstoppable force of nature one might imagine. It was these things that Lovecraft's work brought to mind, personified by the Great Old Ones, kith and kin. They were things so removed from our sense of rationality, or morality, that one could never hope to communicate meaningfully or reason with them.

Amid these excesses of otherworldly terror, I recall being vaguely struck by the misanthropic, xenophobic tone of stories such as "The Horror at Red Hook" and "The Shadow Over Innsmouth." In these and other cases, Lovecraft showed his fear of the "human other" by depicting debased, brutish, often beast-like characters, usually as objects of contrast with his typically erudite, intellectual, gentlemanly, Caucasian protagonists.

That these depictions were overtly racist didn't slap me across the face early on, for it wasn't until relatively recent years that racist stereotypes in the media weren't prevalent. I grew up on cartoons and juvenile live-action programs aimed specifically at white children, with caricatures of blacks, Asians, and others oftentimes being the objects of ostensibly benign japing (and sometimes, clearly less benign). I had relatives from way back who were known to refer to black people as "niggers," supposedly without specific vile intent—this, at least, by way of their explanations to me when I got older. By all indications, to them, the word was simply an epithet they would have seen as scarcely different from the more acceptable "African American" label of today. To those simple, very Christian, very decent white folks, it was their way of describing "the other."

"The other" meaning those that weren't white. It didn't dawn on me until later years that, to them, white meant normal.

Now, my relatives treated every human soul—black, white, yellow, red, or otherwise—with equal courtesy and care. However subtly toxic their deeper views might have been, it never showed in their actions and interactions with others. I can't help but believe, had they ever turned their minds and hands to the written word, they would drawn a line at writing anything quite so darkly revealing as Lovecraft's.

My later readings of HPL's fiction, its context enhanced by exposure to his letters and increased discourse on the subject of his racism among his fans and detractors, made it abundantly clear how much his fiction was shaped by his deep xenophobia. Was he a product of his times? Of course he was; it's probably safe to say he could have passed for a product of any decade in the early to mid 20th century; his ideas simply fell under a brighter spotlight because of his writing and its widespread influence on horror literature in subsequent decades. His words—his attitudes—might have been as much the norm for a larger segment of white Americans than I like to think about up through even more recent years.

I have lived in the north. I grew up and currently live in the south. The place hardly matters. I still see attitudes no less toxic than Lovecraft's in too many of my neighbors. Unfortunately, while I consider myself anything but xenophobic, I find it easy to lapse into a misanthropic mindset, simply due to so much exposure to ignorance and bigotry that, while generally less obvious than in my early years, still lingers in insidious ways, in anything but inconsiderable quantity. Truly, it facilitates a two-fold reaction: the aforementioned misanthropic response, in which I sometimes feel the great human extinction event can't come too soon; the other being one of pity for the blindness of our species overall. We are all, in our own ways, to varying degrees, blind to the human condition, no matter how enlightened we like to consider ourselves. Like Lovecraft, I often see human beings in the bigger picture as oftentimes ugly, essentially insignificant creatures muddling through the cosmos.

Not always, of course. The flip side of that negativity is a deep marveling at how spectacular the human race can be, borne out by evidence as compelling as the negative's, day after day after day. These conflicting emotions actually breed some semblance of empathy for others—a deep relating to every positive and negative emotion or inclination of those around me because I feel I am sufficiently self-aware to recognize my own damned awful side as well as whatever goodness I possess.

So where does that put my feelings about Lovecraft, the man? For him, a man long gone, whom I never knew personally, I cannot feel loathing, or condemnation, or really... anything. If I were to describe any feeling, it would have to be one of pity, I think. Pity that he suffered such fears and prejudices, and that he willfully nurtured that blindness when many of his time were long past such unhealthy myopia. Would I be so charitable to a living individual, of less import to my development as an author? Possibly not. But I try to avoid casting too many stones, for there are so many glass houses in our neighborhoods.

I don't much blame people who are so repulsed by HPL's racist attitudes that they are disinclined to read or in any way support his work. For many, that's simply a natural response. I find myself still enamored of the genuine fear, whatever its basis, that drips from Lovecraft's most powerful stories. What has changed for me in more recent years is my critical view of his various works. His great fiction seems all the greater (though less in proportion to his overall body of work than I might once have believed) and his lesser stories little more than insignificant filler.

Whatever my evaluation of Lovecraft and his work, however it might evolve with time and exposure to other works of literature, as a writer, I owe a debt to the fear that Lovecraft's fiction conveyed to me back when I needed that jolt as a writer.

"When he was good,

He was very, very good;
But when he was bad, he was horrid."
Posted by Stephen Mark Rainey at 5:41 PM

I think growing up during a time when racism was still endemic to American society makes a difference. I remember the Bugs Bunny cartoons that made fun of Asians, Native Americans, and black people; and Song Of The South, the now banned Disney movie that featured slaves. I lived in Tennessee for a lot of my childhood, and I had relatives who wouldn't even go down a grocery store aisle if there were a black person shopping in it. "Nigger" was just the term that everyone used; along with "niggerrigged", for anything poorly repaired, and "niggertown" for any run down, dirty part of a city. There wasn't any malice necessarily inherent the word. It was just the word that everyone used.

I'm fairly certain that I'm not a racist. One of my few friends from grade school is black. We bonded over the fact that we were both picked on a lot, in a tiny southern school where she was the only black kid in our age range, and I was an undiagnosed aspie. My high school sweetheart for about two years was part black, on his mother's side, and now I live in a racially diverse neighborhood.

All of that said, when we first moved here, I lost a friend because I carelessly said that we were moving into "niggertown". - Believe me when I say that I meant nothing by it; I've spent forty years of my life living in parts of the country where that's just a word, like any other. I still catch myself saying "now wait a cotton-pickin' minute", and then it dawning on me that that's a racist phrase, too.

I don't think that people give Lovecraft enough leeway for the fact that he was living at the literal turn of the century. He's not here to explain his thinking, and condemnation based on stories that he probably thought would never see wide readership; let alone world wide readership, by a diverse array of people from all walks of life, every race, country (probably), and religion, is a bit heavy handed.

Personally, I think everyone judges his xenophobia based on their own personal biases; then makes the best argument they can from the facts that support those biases. (Like people do for *everything*, generally speaking.) So ultimately, since the man is dead; however intellectual the arguments, they're all just the feelings of the people who are making them, with the best bits of evidence that they can pull together to support them.

Personally, I take comfort in the fact that, being dead, he's completely oblivious to the people talking shit about him; and his influence is so well ingrained in popular culture, that there is no rooting him out at this point, no matter how much anyone might defame him. So the nay sayers are essentially just venting their impotent angst at each other.