On these shores, Daikaijû Baran — or Varan, the Unbelievable, as the U.S. version is called — might be considered one of Toho's more obscure monster flicks, as hardly anyone other than diehard daikaiju freaks would know of its existence. (Way back when, I did a capsule review of the film for the late AboutHorror.com website, which I resurrected for The Blog Where Horror Dwells; that review can be found here.) Now, the Japanese version has many merits, despite its rather plodding pace and lackluster cast. Eiji Tsuburaya's visual effects work is top-notch; the grim, black-and-white cinematography sets up a delightfully dark atmosphere; and Akira Ifukube's score is majestic and evocative. The American version, on the other hand, is a bunch of celluloid cobbled together to create an entire different movie, featuring Myron Healy sleepwalking from set to set and some monster scenes from the original film thrown in for good measure. It's junk, really, and virtually never seen these days (though it can be streamed at various sites online). 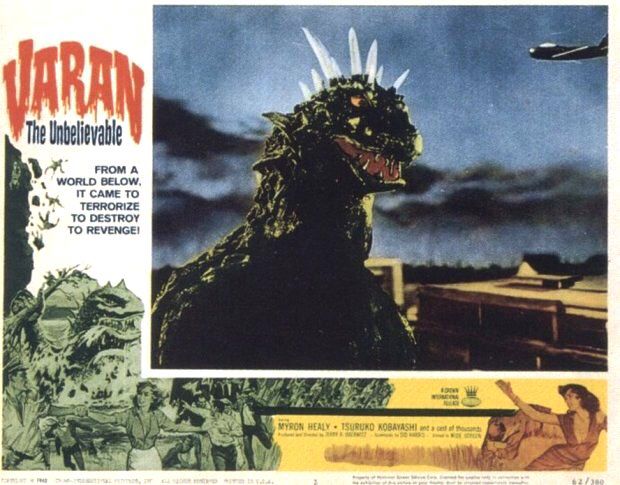 Still, I must tell you, I do have a certain nostalgic fondness for the American version. As a kid, I had only read about it in Greg Shoemaker's Japanese Fantasy Film Journal, and this made for a certain mystique about the film. When I was in sixth or seventh grade, my friends David and Jimmy, both knowing I was a monster movie maniac, kindly informed me that Varan would be coming on TV at 5:00 a.m. on the upcoming Saturday — but it was on a channel that required one of those fancy rotating antennas to receive, and we had no such high-tech gadget at my house. But lord have mercy, friend Jimmy did. What exciting news! So, on that Saturday, at 4-ish in the a.m. — with my parents' reluctant blessing, which in itself was a miracle — I got out of bed, hopped on my bike, and rode the couple of miles to David's place. Then, together, we made our way down the road to Jimmy's place. Now, another friend of mine, Frank, who couldn't come to the showing, had lent me his cassette recorder so I could tape the soundtrack for him. With almost insane eagerness, I set the machine up, and soon enough, on came Varan. The monster scenes were exciting as hell, and the lot of us ate it right up.

Later in the day, and much to my surprise, Gappa, the Triphibian Monster (a.k.a. Monster From a Prehistoric Planet) came on TV, and I had never seen it either. I was in a quandary. I only had my friend's one cassette — should I record over Varan, or miss out on Gappa? (This was all on my friend Frank's behalf, I might add, though I knew we'd be listening to whichever soundtrack we had together frequently.) On the spur of the moment, I taped Gappa over Varan, and of course, Frank was pissed at me because he had watched Gappa but had not seen Varan. So for a few minutes, I was in a the doghouse with him. We got over it real quickly, though, because Destroy All Monsters came to the drive-in theater not long afterward, and we must have listened to the recorded soundtrack to that one a couple of hundred times over.

I never got to see Varan again for about a decade, but for the U.S. version, I've always had a soft spot (which I call Frank).
Posted by Stephen Mark Rainey at 10:01 PM