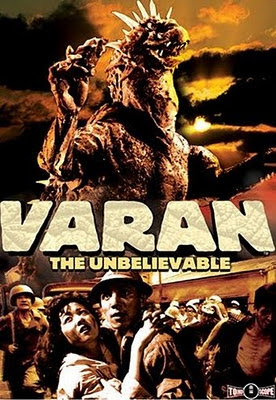 One of Toho's most obscure giant monster flicks, the original Japanese version of Varan, The Unbelievable has long been an object of desire for collectors. The Tokyo Shock DVD presents the original black-and-white film, uncut (sans Myron Healy, who starred in the 1962 American version), in anamorphic widescreen, with numerous extras, including an abridged, alternately scored version originally made for Japanese television release.

The 1962 American release of Varan, The Unbelievable featured bits and pieces of Toho's Daikaiju Baran, but in the context of an entirely new movie starring Myron Healy. The result was an insipid B-flick with some exceptional monster scenes. Virtually none of the original plot or characters survived the Americanization, and stock music by Albert Glasser had replaced Akira Ifukube's dark, atmospheric score. Also missing was a brief but memorable scene of the monster taking flight.

Toho's last black and white daikaiju film, Varan features some of Eiji Tsuburaya's most impressive special effects work, and the monster suit is quite elegant, usually shot at high speed and from low angles to convey a sense of great size. The human drama, however, falls far short of Toho's usual standard, partly due to a lackluster cast—especially the stony-faced Kôzô Nomura as the lead protagonist, and Koreya Senda as the inevitable scientist, whose screen presence utterly fails to engage. Regardless, the Tokyo Shock DVD of Varan is itself a superior product, and the movie's visual strengths certainly make it a more-than-worthy entry in Toho's daikaiju universe.