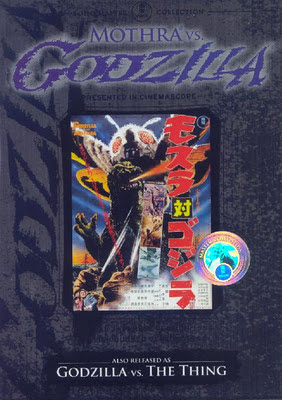 Mothra vs. Godzilla features one of Godzilla's finest screen appearances, with human drama and spectacular monster action coming together to create a near-flawless daikaiju picture. Classic Media presents an excellent DVD release, with both the original Japanese version and the 1964 American International Pictures release (under the original A.I.P. title Godzilla vs. the Thing). This film is one of the few Toho monster fests whose American release version surpasses the original.

This Toho classic depicts Godzilla at his all-time best, featuring one of the most impressive Godzilla suit designs and some of Eiji Tsuburaya's finest special effects work. Virtually every scene featuring Godzilla was composed to be visually spectacular, and the innovative effects work holds up admirably, even after 40+ years. Akira Ifukube composed a memorable score, which perfectly complements the film and establishes motifs that have become synonymous with Godzilla over the years.

While the original Japanese version contains a few minor scenes that aren't present in the American release, it is missing one of the best-realized effects sequences shot for the film—the Frontier missile attack scene. Most likely, this is because the attack is carried out by the U.S. Navy, which, at the time, would have flown in the face of Japanese sensibilities.

The Classic Media DVD is superb, although the aspect ratio of the U.S. version is cropped to be narrower than the original widescreen (due to it otherwise being the best available print, I understand). It's a small issue, so this DVD release receives top recommendation.
Posted by Stephen Mark Rainey at 12:01 AM