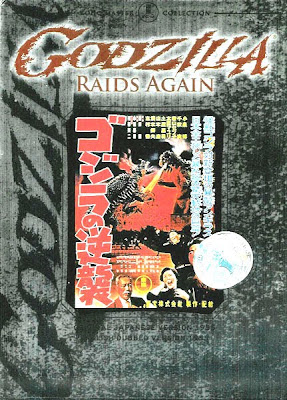 The first of many sequels to the original Godzilla, this relatively obscure film suffers in comparison to its predecessor, yet still stands out as an innovative entry in the series. In 1955, Toho was just cutting its teeth in the daikaju genre, but managed to produce a film with some remarkable special effects work and atmospheric cinematography. Viewed in context, Godzilla Raids Again remains a treat for Godzilla fans.

Unlike the original Godzilla, which was a powerful allegory about the horrors of nuclear war, Godzilla Raids Again plays more as a standard 1950's monster-on-the-loose melodrama, and stands as the first in the cycle of monster-vs.-monster movies for which Toho is famous. However, the often-superb special effects and moody cinematography elevate this one well above most of its contemporaries. Godzilla's first foe, Angilas (who, over the course of the Godzilla series, became one of Toho's most popular daikaiju), makes a striking debut in this picture. Oh, and by the way—regardless of the spelling "Anguirus," which Toho has officially trademarked, I will never, ever, EVER refer to this monster by such a name. The original Katakana characters spell AN-GI-RA-SU, so either "Angilas" or "Angurus" work fine; but never An-GWEER-us." Ack, gack, and double yack. Anyway, if we went by Toho's Anglicized spellings, we'd be flying on "Japan Air Lens" today. I'll take a pass.

Unfortunately, the Americanization of Gigantis, supervised by Paul Schreibman, is a farce, and results in the entire production playing as unintentional camp. Flawed though it might be, the original Japanese version stands as a noteworthy entry in the Godzilla series, and is highly entertaining in its own right.