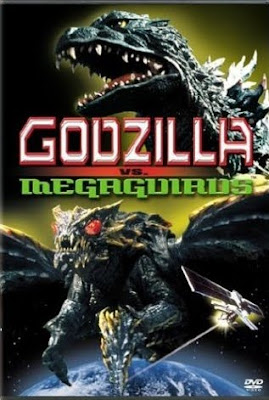 Godzilla vs. Megaguirus presents a true "alternate universe" Godzilla, in which Japan's social, economic, and technological development has been shaped by the threat of the monster. The capital of Japan is not Tokyo but Osaka, nuclear power has been outlawed, and the perfection of plasma energy is the new frontier of science. In hopes of destroying Godzilla, scientists create a weapon that produces a miniature black hole, but its use brings unforeseen consequences—an extra-dimensional horror called Megaguirus.

With a suit design similar to the one used in Godzilla 2000, Godzilla has never looked more reptilian and outright dangerous. Director Masaaki Tezuka has produced a well-paced, energetic monster flick that is reminiscent of the most enjoyable Showa-era Godzilla movies, its unlikely premise presented intriguingly enough to make it palatable. Composer Michiru Oshima, with the first of her three Godzilla scores, proves herself a worthy successor to maestro Akira Ifukube, whose distinctive musical scores have become synonymous with Godzilla. Adding to the fun is the appearance of actress Yuriko Hoshi, who appeared in Mothra vs. Godzilla and Ghidrah, the Three-Headed Monster in the 60s. All in all, Godzilla vs. Megaguirus comes across as the best, most entertaining entry in the Millennium Godzilla series.