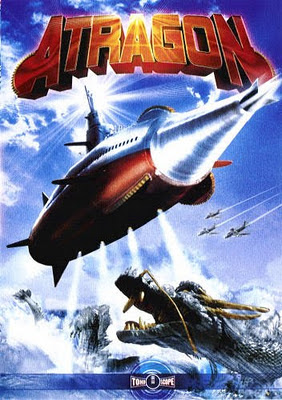 A few years back, I regularly wrote capsule reviews of daikaiju DVD releases for About Horror.com, and since that venue no longer exists, I figured I'd post some of those reviews here. I'll start it off with one of my favorites.

Seldom seen in the West, Atragon was one of Toho’s most elaborate productions of the early 1960s. Based on Shunro Oshikawa’s 1902 novel of the same name, Shinichi Sekizawa’s screenplay offers a deeply patriotic theme, well-drawn characters, a flying super-submarine, and the inevitable daikaiju (Manda, the sea serpent). Despite some occasionally weak visuals, the film’s top-tier cast, fine direction by Ishiro Honda, and rousing score by Akira Ifukube make for an entertaining hour and a half.

The extras Media Blasters/Tokyo Shock customarily provides for its Toho releases are absent from this package—only trailers and a commentary by Koji Kujita, the film’s assistant director. Regardless, the widescreen print is excellent, with a choice of English subtitles or dubbing (though inferior to the Titra dub of the original 1963 U.S. release). Interestingly, the title Atragon was a shortening of “Atlantis Dragon”—a reference to Manda, the movie’s briefly seen daikaiju. However, the super-submarine star of the film (the Goten-Go) assumed the name Atragon, and the English dialogue erroneously refers to it as such.

The story touches on fervent Japanese nationalism, with Goten-Go commander Jinguji being a diehard patriot who refuses the nations of the world the use of his super-weapon against the undersea Mu Empire, which plans to dominate the surface. However, as you might guess, this mindset cannot prevail, and the character-centered, politically charged human drama gives way to an action-packed special-effects extravaganza. Atragon is one of Toho’s landmark features, and despite the lack of extras, this DVD is a rare gem for daikaiju addicts.