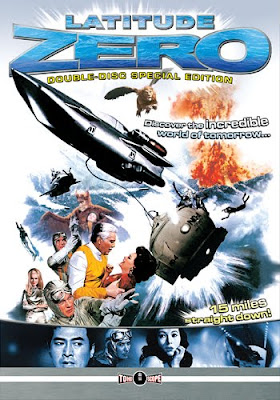 Over the past few years, Media Blasters/Tokyo Shock has treated tokusatsuphiles to some mighty fine goodies, and its release of Latitude Zero has been among my most anticipated. I first saw this 1969 Toho film in August, 1978, during a memorable visit with Japanese Giants guys, Ed Godziszewski and Bill Gudmundson, and I was immediately taken with its action-packed storyline, colorful cinematography, and superb musical score. A somewhat underrated film, Latitude Zero has remained one of my favorites from Toho, so a first-rate U.S. release on DVD is a welcome thing indeed.

Latitude Zero's screenplay, written by Ted Sherdeman, based on his original radio dramas, Tales of Latitude Zero, is typical of action-oriented science-fiction films of the era—fast-paced, weak in science but high in fantasy, with well-defined protagonists and villains. The direction is classic Ishiro Honda—dramatic staging, effective cuts, and the distinctive theme of humanity's potential for greatness (and its frequent perversion) running like an undercurrent behind the action. The film is very much a classic comic-book story adapted to live action.

Latitude Zero was not the first Toho production to feature English-speaking actors alongside the studio's ensemble of regulars, but it was unique in that the film was shot mostly in English, the Japanese actors speaking their lines phonetically, with varying degrees of success. In an unusual twist, it is the Japanese version that is dubbed, in Japanese, rather than its American counterpart. In general, the cast members and their performances are of Toho's typically high caliber, and Joseph Cotten deserves special credit for playing his role while suffering from acute liver disease. Richard Jaeckel and Linda Haynes turn in rather wooden performances, but in spite of themselves are adequate for their parts since they are only a portion of a very capable ensemble. As Malec, Cesar Romero brings much of the same sinister exuberance he brought to his role as the Joker in the Batman TV series from a few short years before.

The production values for Latitude Zero are generally excellent, with special effects that rank among Toho's best to date—particularly the underwater scenes with the Alpha and the Black Shark, most of which were filmed on a soundstage, the illusion of being underwater provided by expertly rendered optical effects. The "Tohoscope" widescreen cinematography is put to excellent use, especially in scenes that show the submarines in profile. On occasion, one can glimpse the wires suspending the vessels, but the subs' movements are so natural, without a trace of wobbling or swaying, they actually appear to be maneuvering underwater.

The undersea volcano and the climactic destruction of Bloodrock also rate highly in Toho's history of spectacular explosion effects. As in Atragon, the former effect was achieved by dumping dye into a water tank and filming it with the camera inverted, giving it the appearance of erupting upward. Combined with high-speed camera work and perfect lighting, the dye effect makes for one of the most convincing volcano eruptions Toho ever achieved.

Unfortunately, it's the monstrous critters that are the weakest link in the film. The bat mutants, the giant rats, and the lion/gryphon are all costumed actors, and none of the creature suits comes close to the excellence of the miniature effects work. They are, in fact, utterly laughable, and their poor designs can't help but diminish the quality of the effects as a whole. It's a shame that in this film, Toho falls so far short in the area where it so often excelled-creating monsters that, if not thoroughly believable, excited the imagination.

Akira Ifukube's score, to my mind, is one of his all-time best. A wealth of distinctive compositions are inserted strategically into the film; the same few themes are not just repeated over and over, as in Space Monster Dogora, Terror of MechaGodzilla, or Space Amoeba. A muted harpsichord theme plays as a backdrop to scenes of Latitude Zero, accentuating the antiquity, despite its advanced science, of the underwater society. The action themes bring to mind a number of Ifukube's most memorable pieces from Atragon, Frankenstein Conquers the World, and War of the Gargantuas, but none are merely derivative; each possesses a unique identity. For a most satisfying stand-alone listening experience—if you can find a copy—I highly recommend the Latitude Zero soundtrack CD (Futureland TYCY-5506).

Tokyo Shock provides the English and Japanese versions on two separate DVDs, and the package also includes a separate disc of trailers for other Media Blasters releases. The restored prints are beautiful—so clear that the aforementioned wires on the Alpha occasionally appear where I've never been able to see them before. Extra features include deleted scenes (some from Latitude Zero, others from Atragon, The Grand Fleet, and what appears to be Submersion of Japan), a stills gallery, and commentaries by assistant director Seiji Tani and special effects directors Teruyoshi Nakano, Koichi Kawakita, and Motoyoshi Tomioka.

Despite its oftentimes-juvenile character, Latitude Zero manages to be an exhilarating, imaginative picture, and Tokyo Shock finally gives it a most worthy release on our side of the water. A+ for the overall package.