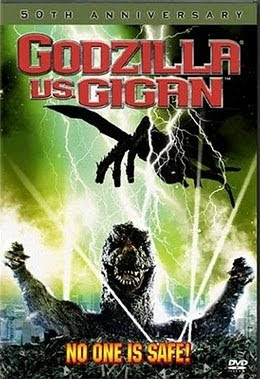 A cartoonist and his friends discover that a Godzilla-related theme park is actually a front for space aliens bent on world domination. When the cartoonist plays an audio tape stolen from the aliens, Godzilla and Angilas, on Monster Island, detect it and set out to discover the source. Meanwhile, the aliens summon King Ghidorah and a new monster, Gigan, from outer space to wreak havoc on Earth. Godzilla and Angilas are soon pitted in a grand, occasionally bloody battle with the two space monsters.

After the experimental Godzilla vs. Hedorah, Toho returned to the more familiar theme of space aliens invading Earth with Godzilla vs. Gigan (a.k.a. Godzilla on Monster Island). The result, however, is a mish-mosh of stock footage, canned Akira Ifukube music, and juvenile monster antics that fall far short of the fantastic daikaiju romps of the 1960s. If not for a few shining moments of monsters destroying civilization, the lackluster cast and foolish script would make this a totally forgettable entry in the Godzilla series.

Despite featuring one of Godzilla's coolest-looking foes, the movie carries silliness to its utmost extreme, the monster battles largely being pale imitations of those in such classics as Ghidrah, The Three-Headed Monster; Monster Zero; and Destroy All Monsters. Extensive use of stock footage ruins any number of the sequences, and many of the new special effects scenes fall laughably below the standard set by the series' earlier entries. Still, the high-quality, widescreen DVD presentation greatly enhances the cheesy fun factor, and the movie can be recommended for the sheer amount of monster action.