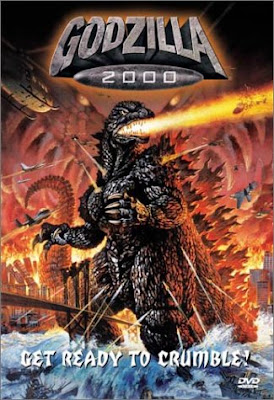 After the universally panned Tristar Godzilla (1998), Toho decided to correct some of Roland Emmerich and Dean Devlin’s mistakes. They only partially succeeded. Godzilla 2000 returns Godzilla to his rightful place as a rampaging, powerful, radiation-scarred daikaiju, rather than an oversized, cowardly iguana, but—unfortunately—it also features long stretches of uninspired people scenes and a monstrous opponent that fails to impress.

Originally, Sony proclaimed that the 50-year anniversary release of Godzilla 2000 would feature the film’s original Japanese version. However, the 2004 DVD contains only the American release produced by Mike Schlesinger (the same as the original 2001 Sony DVD release). To some, the U.S. version is actually an improvement, since it trims the original running time by 12 minutes, only a fraction of which includes monster scenes. However, the English dialogue comes off as distinctly more tongue-in-cheek than the original Japanese, mostly to the film’s detriment.

Regardless, Godzilla 2000 is an entertaining film that stands head and shoulders above the 1998 Tristar farce. Toho presents a fearsome Godzilla, much more in keeping with his traditional, malevolent image. The plot, slow as it is, offers an interesting look at Godzilla’s regenerative powers, and the special effects are often exceptional. However, Godzilla’s opponent, Orga, is much more interesting in concept than execution, and the long stretches of movie that prompt one to ask “where’s the monster?” weaken what might otherwise be a Toho classic.