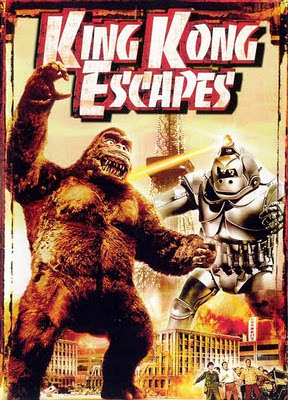 A Toho/Rankin-Bass co-production, King Kong Escapes offers an imaginative, engaging story, with some surprisingly good special effects, and a first-rate musical score by Akira Ifukube. This is the first and only movie to feature MechaniKong, one of Toho's most popular creations. With a few nods to the original Kong as well as the Rankin-Bass cartoon that spawned it, King Kong Escapes makes for some of the best escapist fun anyone can have at the movies.

As colorful and imaginative as it is ridiculous, King Kong Escapes is one of several films Toho co-produced with U.S. studios in the late 1960s to expand its international audience. Although the King Kong suit itself is awfully cuddly (meant to appeal to kids who enjoyed the Rankin-Bass King Kong cartoon), the big ape turns in an entertaining performance—falling head over heels for almost-actress Linda Miller, fighting the giant rubber dinosaur Gorosaurus, and wreaking havoc at the North Pole. The crowning grace of the movie, though, is MechaniKong, the simian's 60-foot metal counterpart, engineered by that international Judas, Dr. Who (played by Eisei Amamoto). Toho's special effects department went to town with King Kong Escapes; it's a beautifully photographed, very colorful movie with some highly impressive miniature work.

The American version presented here is virtually the same as the original Japanese; only a few minor differences exist between the two. This Universal DVD, though bereft of extras, offers such a beautiful widescreen print that I consider it an irresistible item. This is half of a two-fer from Universal, the other half being King Kong vs. Godzilla.

I used this post as a reference for a short review for the same flick: