Attack the Summit of Bad Actors! 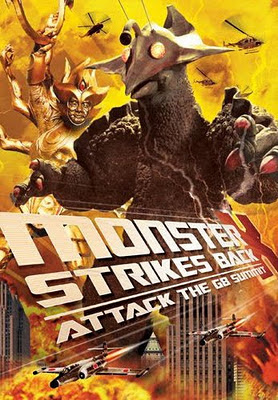 Back in the early days of my very odd personal development, I was introduced to Greg Shoemaker's Japanese Fantasy Film Journal by way of issue #4—late 1970, there or about. In its pages, I found mention of a creature named Guilala, which was unknown to me at the time. Fascinated, I wrote letters to Mr. Shoemaker and other fans of my acquaintance, trying to determine just who or what this Guilala actually was. "Oh, that's The X From Outer Space," came at least one reply. The cryptic nature of this title—especially the "Outer Space" portion of it—really snagged my attention. So when in a later issue of JFFJ there appeared an actual photo of said beast, I looked upon this thing in wonder and said to my very young self, "That's weird."

Long about age 15, I discovered that The X From Outer Space was scheduled to run on a weekend TV monster movie, so I was antsy all week, anticipating the advent of this semi-mythical daikaiju. Finally, the film began, and here I was, watching the exploits of Spaceship AAB-Gamma and its crew of rockin', silver-clad astronauts. Wow. Lounge-lizard space sets, cute little miniature buildings, and…what's this? A rubber turkey with bobbing antennae that could turn into a floating red rubber ball. Not only that, eventually, Guilala became a big old pile of non-mentholated shaving cream!

Over the years, I was treated to numerous showings of The X From Outer Space, and with each viewing, I seemed to find it a little bit weirder. Now, in my advancing middle age, I learn that Guilala has been slated to return-wilder and woollier than ever. Cool.

Saw a trailer or two, some photos in G-Fan magazine...and I actually got to thinking that the revival of Monster X might actually be a good thing.

When the Media Blasters/Tokyo Shock DVD arrived, I was pretty eager. Looked like Guilala hadn't changed a bit from his familiar old self. Wonder if he's going to toss tankers on wires into tall wobbling smokestacks? Well, let's find out.

Okay, we have a bunch of peculiar politicians spewing corny jokes, all gathered in Hokkaido for the newest G8 summit. Meanwhile, a couple of young reporters, Sumire Sumidagawa (Natsuki Kato, who is too cute for words) and Sanpei Toyama (Kazuki Kato), wander into the forests near the Lake Toya and discover a hidden village where they sing and dance and worship something known as Take-Majin. On the village temple, we see an image, not just of Take-Majin, but of a somewhat familiar-looking, flying saucer-headed, bobble-antennaed critter. Before we know it, a fireball streaks to earth, blows up some buildings, and from the conflagration emerges…Guilala. Yay! But wait a second. Is that stock footage?! Goodness gracious me. Say it ain't so.

Ah well. The politicians panic and contemplate evacuation, only to be told by the U.S. President—who mimics a few of Dubya's more aggressive mannerisms—that the world leaders should be ashamed for being afraid After all, if they come together and defeat the monster, they will look just dapper in the polls. With something of a poke at Japan's constitution, which allows its military to function only in defensive capacity, the Japanese forces—headed by Yosuke Natsuke (star of Ghidrah, the Three-Headed Monster; Dagora, the Space Monster; and Godzilla 1984)—take on a purely supportive role.

Okay, time for the rest of the world to go on the offensive. Guilala stations himself in a particular corner of the landscape set and waits there for the challenges. One after another, each nation devises a new, novel plot to destroy Guilala—from lethal gas attack to brain-scrambling radio waves to digging a big hole he's suppose to fall into (and what…break his crown?). Each fails, of course. None is terribly spectacular, but there are some amusing scenes of each country's flag lowering to half-staff after its unsuccessful attack. Also pretty funny: as each nation takes its respective helm, a hustling staff person rushes onscreen and changes the title banner of the G8 conference room to reflect the name of the upcoming operation. While all this is happening, scenes of interviews with the local populace indicate that they wish they were in a Toho film—i.e., it would have been better if the monster were Baragon or Varan. Indeed, much of the action music is clearly patterned after Ifukube's battle marches. Cute. Sort of.

As things begin to look bleaker and bleaker, the Japanese prime minister (Hideo Fukamoto) suffers an acute case of irritable bowel syndrome and excuses himself, only to be replaced by the former PM (Akira Matsushita), who appears happy to take charge. But what do you know—in a wild twist, the old PM isn't the PM, but North Korean dictator, Kim Jong Il! And crimey, just to show everyone what for, the imposter launches a nuclear missile to destroy Guilala and contaminate the Japanese countryside. Oh, no!

Meanwhile, the young reporters seen early in the film, told by a young member of the aforementioned remote village that humans can't kill Guilala, decide that they must awaken Take-Majin to do the job. At first, the villagers don't like the idea of Sumire joining in the ceremony, but she's just so gosh-darned cute that, really, how could this village of mostly men ever say no?

Dancing and singing ensues. It's a pretty catchy ceremonial song. I like it. And at last, from a little statuette, which holds in its hands a fire extinguisher and an umbrella, the giant Take-Majin comes to life. This cross-eyed, golden-armored, multi-armed battle-ax takes flight and goes after Guilala, only to come between it and the North Korean missile. The nuclear projectile does a distinctly uncomplimentary number on poor Take-Majin, but he takes it with good humor and promptly goes into battle with Guilala. Without explanation, Take-Majin's multiple arms vanish, and an Ultramanish wrestling match ensues, with Take-Majin, needless to say, flying happily off into the sunset.

But no shaving cream, dammit.

Directed by Minoru Kawasaki (The World Sinks Except Japan, Pussy Soup, et. al.) this incarnation of Guilala is certainly weird, though its character is radically different from the original. The political satire, such as it is, comes across as juvenile in the extreme, though it occasionally manages to be engaging—particularly the "surprise" appearance of the Kim Jong Il chap. Unfortunately, the more expansive monster scenes happen as a result of stock footage (yeah, believe it or not, given the limitations of the original). The monster, for most of the movie, is relegated to a very small set, onto which towers or buildings are occasionally dropped in haphazard fashion to make it appear that he has moved. And the battle with Take-Majin offers little of the excitement, novelty, or old-fashioned fun that you'd expect in such a wacky daikaiju fest.

Regardless, overall, Monster X Strikes Again: Attack the G8 Summit! somehow manages, at least on occasion, to appeal to my sense of the ridiculous. I don't hate the thing, but now that I've seen it a couple of times—once in the company of some fellow lovers of all things daikaiju, resulting in the inevitable faux-MST3K experience—I doubt I'll watch it again; at least not until I have an insatiable craving to watch Natsuki Kato dance around with a bunch of crotchety old dudes in the forest.

Check it out once and forget it. It'll never replace the original The X From Outer Space as a pinnacle of truly bizarre daikaiju cinema.