The Fungus Among Us 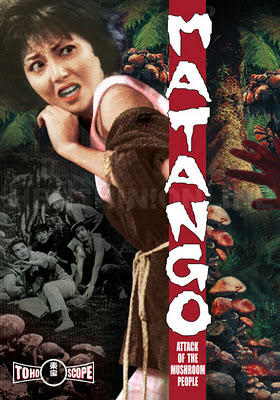 Based on the William Hope Hodgson short story "A Voice in the Night," this 1962 Toho horror classic could almost be titled "Gilligan's Island Goes to Hell." Seven shipwrecked survivors find themselves on an island haunted by the ghosts of previous wrecks—or so it seems. The castaways soon discover that the crew of one abandoned vessel was conducting experiments with a mutated fungus known as "Matango"—and may not actually be dead but weirdly transformed.

Amid the production of its colorful, fantastic daikaiju flicks, the Toho tried at its hand at several very grim horror stories, of which Matango is arguably the most successful. Avid Godzilla fans will see many familiar faces in Matango, which featured one of its typical ensembles of extraordinary talent. The Media Blasters/Toho Shock DVD offers a gorgeous, widescreen print with the original Japanese soundtrack and English subtitles (or English dubbing for those who prefer it).

The film was released directly to television in 1963 with the lurid title Attack of the Mushroom People, and was rarely seen in subsequent years except on the occasional late-night horror show. The story is unrelentingly dark, claustrophobic, and misanthropic; none of the characters are particularly likable (though extremely well-portrayed), even those with whom we ought to feel a measure of sympathy. The build-up to the final horror is inexorable, without a shred of comic relief for the viewer. The eerie sound effects and unsettling score add to the mood, making Matango a true horror classic, now available as it was originally meant to be seen by Tokyo Shock Productions.