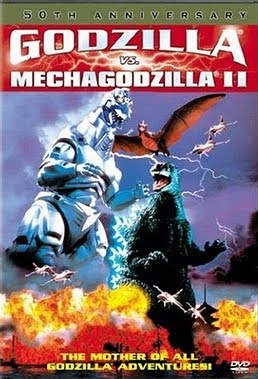 "MechaGodzilla II" is no relation of Godzilla's mechanical doppelganger from 1974's Godzilla vs. MechaGodzilla and its 1975 sequel, Terror of MechaGodzilla. The original was a destructive tool designed by space aliens intent on conquering Earth, while this one is the brainchild of G-Force, the agency charged with protecting human civilization from Godzilla. The Sony DVD offers a good widescreen print, with a choice of English dubbing or original Japanese language with subtitles.

After 1992's rather lame Godzilla vs. Mothra, Toho rebounded with a new incarnation of MechaGodzilla, this time conceived as humanity's best weapon against Godzilla, manufactured with the aid of future technology (left over from 1991's Godzilla vs. King Ghidorah). Though the design of the artificial daikaiju isn't as impressive as either the original or the Millennium series' version (known as Kiryu), its confrontations with Godzilla are often masterfully staged. A new version of Rodan, the flying monster, makes an appearance here, though its design and execution are both somewhat lackluster.

Godzilla has a new offspring, realized with considerably more success than in 1967's Son of Godzilla. Despite some inevitable parallels to Gorgo, the scenes with the baby Godzilla add a somewhat surprising measure of pathos to the story, as does the well-timed inclusion of some insight to Godzilla's nature.

With a decent cast, excellent special effects, a better-than-average plot, and a top-notch musical score, Godzilla vs. MechaGodzilla II stands out as one of the most impressive entries in the Heisei (1989-1995) Godzilla series.