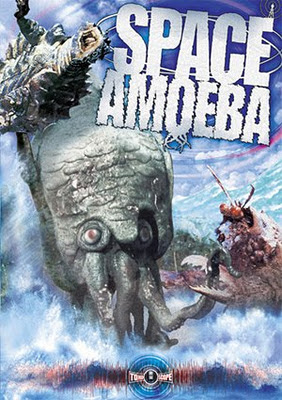 Better known as Yog, Monster From Space, this Media Blasters/Tokyo Shock DVD release is another welcome addition to its expanding daikaiju library. With a healthy complement of extras, it features a beautiful, widescreen print and a choice of the original Japanese soundtrack with subtitles or English dubbing—though not the Titra dub that accompanied the 1971 American International release of Yog; this is the inferior international dub created in Hong Kong.

An unmanned space probe splashes down in the south Pacific, bringing with it an alien life form that transforms specimens of the local fauna into rampaging behemoths. An expedition sent to scout the remote Selgio Island for commercial development run up against the big critters—and the alien force—with fairly ugly results.

Outside of Space Amoeba, I don't think you'll find another movie that features a gigantic squid walking upright on its tentacles. But Gezora, the cuttlefish in question, despite being so obviously a man in a rubber squid suit, has some pretty wicked moments on the screen. With its bulging eyes and writhing tentacles, Gezora possesses a demeanor almost intimidating enough to temper the obligatory chuckles. Ganime, the giant crab, and Kameba, the mutant turtle, also have some entertaining moments, particularly when menacing their diminutive human quarry.