No, Not Dog. Jellyfish. From Outer Space. 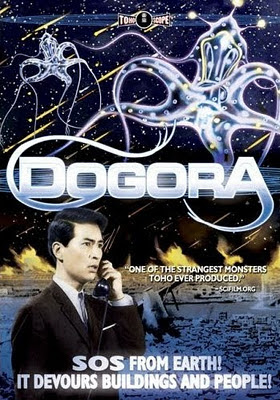 With their first-class DVD releases of Varan, The Unbelievable; Matango; and The Mysterians, Media Blasters/Tokyo Shock showed folks on the wrong side of the water just how it ought to be done. Essentially repackaged versions of the Toho Region 2 DVDs, the aforementioned releases have included all the original extra features as well as a choice of English subtitles or dubbing (except for Varan, which offers subtitles only). The newest Tokyo Shock release, Dogora (a.k.a. Space Monster Dogora, a.k.a. Dagora, The Space Monster) comes to us without the benefit of a Region 2 release to work from, and the difference between this package and the others is quickly evident. It features no commentary tracks, featurettes, or other noteworthy extras typical of Toho's domestic DVD releases. Though it does provide a still gallery and original theatrical trailer (sans subtitles, alas), compared to the previous products, Dogora seems somewhat bare bones.

Know what? I don't care very much. I've yet to peruse all the extras on the other DVDs anyway (though I eventually will, to be sure). I pick up these DVDs for the movies themselves, and while I love having the extra goodies, by no stretch do they make or break the package's value for me. In the case of Dogora, the near-pristine print, wide-screen presentation, and choice of subtitles or dubbing makes this release another clear winner. A few reddish marks appear on the print during the opening titles of the film, but otherwise, the visual presentation appears flawless. As is generally the case, the Japanese audio track is much higher quality than the English one, with deep, full-bodied sound even in mono; the English audio track is recorded at a much lower volume and sounds very tinny. On the positive side, the dubbed soundtrack is the same one used in the original 1964 American International release and is of reasonably high quality—unlike the redone English audio production on Tokyo Shock's DVD of The Mysterians, which is downright horrible.

In a nutshell, Dogora is about an odd life form that has developed in the upper reaches of the atmosphere and has a singular taste for materials composed of carbon. At the beginning of the film, an unknown force destroys a new satellite as it orbits the earth; soon afterward, significant quantities of diamonds begin disappearing all over the world. Naturally enough, investigators believe that human culprits are responsible, but as more and more people witness large amounts of carbon-based material, such as coal, being suddenly sucked into the atmosphere, it becomes clear that something else is doing the pilfering. (Not that this revelation sways our intrepid authorities from stubbornly staying on the trail of a notorious gang of diamond thieves.) As the space creature devours more carbon, it continually mutates—or evolves—until it becomes a gigantic, airborne, jellyfish-like creature with an insatiable appetite.

Dogora is one of Toho's most unusual daikaiju films for numerous reasons, perhaps most notably for the fact that the monster is something of a minor character. Though the "outer space cell" may be the catalyst for the story, most of the movie's running time is devoted to the antics of our fairly amusing diamond thieves and the efforts of the detectives who want to stop them. As a youngster watching this movie on TV for the first time, sometime in the late 60s, I found it all rather dull and boring and without imagination; in later years, however, I repented and began to enjoy the movie for its unique merits. The plot still seems a wee bit convoluted (but it does makes a weird kind of sense if you hold your mouth just right), and the intriguing human drama never runs out of steam. Above all else, from a dramatic standpoint, Dogora showcases the talents of American-bred actor Robert Dunham, who stars as the enigmatic (read silly) "Diamond G-Man" Mark Jackson. Though Dunham may have later shouted his way to something like fame as the emperor of Seatopia in Godzilla vs. Megalon, it's in Dogora that he really chews up the scenery and proves, once and for all, that Japanese soybeans have a nice flavor. Unlike most Caucasian actors in Toho productions, Dunham spoke excellent Japanese, which meant that his lines did not need to be dubbed for the Japanese language release. Thankfully, his dubbed voice in the English version preserves much of the humor present in the original, and if anything, the dubber's frequently exaggerated delivery makes the Mark Jackson character all the more memorable.

The cast of Dogora comprises many familiar faces from the pool of Toho regulars. Playing almost the same role he played in Ghidrah, The Three-Headed Monster, Yosuke Natsuki makes for a likable police detective named Komai, who first falls victim to trickster Mark Jackson, but eventually becomes an effective foil. In the course of his investigation, Komai meets an aging scientist and "young soldier"—a gag that is repeated a couple of times in the film—named Munakata, who is working to develop artificial diamonds, hence his interest in a diamond-eating space monster. Komai also takes a romantic interest in Munakata's lovely assistant Masayo, played by Yoko Fujiyama, who is, as anyone who has seen Atragon can testify, the prettiest girl anyone has ever seen outside of a dream. Masayo also happens to be the sister of satellite mission control director Kirino, played by Hiroshi Koizumi, though his part is so small as to be nearly negligible.

The diamond thieves are a fairly colorful lot, led by a Mr. Big-type villain played by Seizaburo Kawazu. Akiko Wakabayashi, familiar to western viewers from her appearances in You Only Live Twice and What's Up Tiger Lily? (not to mention King Kong vs. Godzilla and Ghidrah, The Three-Headed Monster), plays her rather treacherous character with cat-like charm. And eccentric as always, Eisei Amamoto (best known as Dr. Who from King Kong Escapes and the ghostly "prophet" in Godzilla - Mothra - King Ghidorah - Giant Monsters All-Out Attack), renders some comic relief as Eiji the Safecracker. While the movie provides little in the way of well-rounded characters, the cast moves with the vitality typical of Toho's early-to-mid 60s fantasy fare, and as such can't help but be entertaining.

Eiji Tsuburaya's special effects are less extensive in Dogora than in many of his prior and subsequent efforts, but the film does feature a number of highly impressive sequences. The opening outer space scenes come off fairly well, highlighted by an eerie Akira Ifukube score. Most impressive are the shots of Dogora sucking columns of coal and debris into the sky-particularly once it has developed into its gigantic jellyfish form. Swirling cyclones form above piles of coal outside the huge refineries and draw the black matter skyward, the effect being utterly convincing. Certain other effects, though, such as a truck leaving the road and being drawn into the air, are less successful.

Dogora's most dramatic appearance comes late in the film, in the sky above Kyushu. Suspended in the air just as if it were floating in water, the immense creature lowers its perfectly articulated tendrils from the clouds, and with the use of obvious but interesting cartoon animation, destroys a suspension bridge. The model bridge does not rate as one of Tsuburaya's best miniatures, but the scene is the only major interaction between Dogora and the earthly environment. Given the airborne monster's remarkably lifelike aspect, the scene stands out as one of the highlights of the film.

Because of its unique and often peculiar storyline and characters, it's easy for modern audiences to hurl stones at Dogora. However, that very peculiarity also serves to make the movie all the more endearing should one be inclined to give it an opportunity. Tokyo Shock has once again given us a chance to enjoy a Toho monster movie in its original glory, and I will hereby happily give it a (radioactively) glowing recommendation.