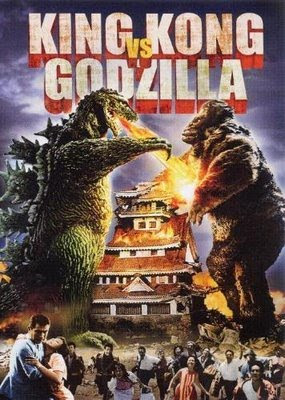 One of the all-time classic monster duels comes to DVD—a beautiful print presented in anamorphic widescreen. Unlike the recent Sony and Media Blasters/Tokyo Shock releases of Toho classics, which include the original Japanese versions, this Universal release offers only the American version produced by John Beck in 1963 (Universal owns the rights, which frees them from having to wrangle with Toho for licensing).

The Americanized version of King Kong vs. Godzilla is a travesty, but a fun one. The original Toho film took a clever tongue-in-cheek approach, which the American producers managed to decimate with heavy-handed editing and inserting new scenes featuring Michael Keith as a news reporter and Harry Holcombe as a scientist. To U.S. audiences, the Japanese actors come off as buffoons, whereas in the original, they're playing nudge-nudge, wink-wink with viewers—especially Ichiro Arishima as the irrepressible Mr. Tako. One of the most infuriating excisions from the original Japanese version is Akira Ifukube's alternately somber and rousing score; in its place is stock Universal library music, including the main title from The Creature From the Black Lagoon.

Fortunately, most of the monster scenes survive intact. Kong himself resembles a moth-eaten, Raggedy Ape doll, which might rightly insult fans of the original Kong, but most daikaiju aficionados accept it as part of the film's silly charm.

King Kong vs. Godzilla is half of a double-DVD release, the other half being the Toho/Rankin-Bass production King Kong Escapes. Highly recommended for its fine video presentation.