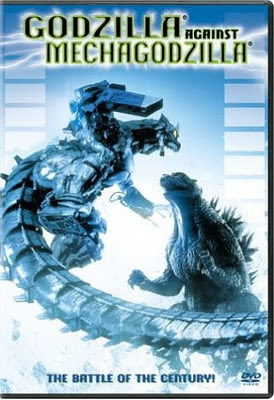 Like the rest of the Millennium Godzilla series, Godzilla vs. MechaGodzilla offers a new origin for the "current" Godzilla, ignoring everything in the series except the original 1954 film. Godzilla appears less impressive than in the previous, very enjoyable Masaaki Tezuka outing, Godzilla vs. Megaguirus, the suit being overly bulky with a disproportionately small head. The new MechaGodzilla ("Kiryu"), however, appears both impressive and believable—at least in context.

After nearly 50 years, Godzilla reappears in Japan…though a visually exciting opening relates that, during these years, other monsters (including Mothra from the 1963 film of the same name and Gaila from War of the Gargantuas) have raided the nation. To fend off the King of the Monsters, scientists create a powerful mechanical beast known as Kiryu (Sacred Dragon)—built over the skeleton of the original Godzilla (killed by the oxygen destroyer in the original 1954 film) and controlled by computers powered by Godzilla DNA. During its first battle with Godzilla, Kiryu's DNA reacts to the new monster's presence, and MechaGodzilla goes berserk.

Eventually regaining control, the defense force once again pits Kiryu against Godzilla, and the two engage in a ferocious battle. Kiryu is piloted by a brave young woman named Akane Yashiro (wonderfully played by Yumiko Shaku), who has been emotionally devastated by the loss of her CO to Godzilla during its first raid. An agreeable human drama augments the exciting battles, although the ending is abrupt and rather flat, leaving one feeling ultimately unfulfilled.