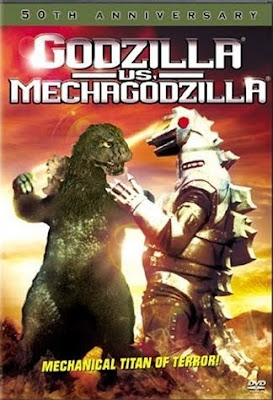 The first of Godzilla's romps with his mechanized counterpart, the original Godzilla vs. MechaGodzilla centers on—surprise!—space aliens bent on conquering the earth. These fellows look as if they stepped out of an amateur Planet of the Apes costume contest, but MechaGodzilla himself is one of Toho's most impressive beasties. The Sony DVD features a beautiful widescreen presentation, with a choice of English dubbing or the original Japanese soundtrack with subtitles.

This Toho monsterfest originally came to town in 1977 courtesy of Cinema Shares International under the title Godzilla vs. the Bionic Monster, but Universal objected to the use of the term "bionic," which they coined for their The Six-Million Dollar Man TV series, so Cinema Shares changed the title to Godzilla vs. the Cosmic Monster. Sony has wisely released the movie under its original production title.

While the story mimics some of Toho's most enjoyable daikaiju outings, such as Monster Zero and Destroy All Monsters, the production suffers from the budget constraints typical of that lean period for the studio, and director Jun Fukuda and special effects director Teruyoshi Nakano frequently opt to amuse rather than impress. The Godzilla, Angilas, and King Seesar suits are inferior (the latter resembling a mythological Asian lion on a bad hair day), so MechaGodzilla stands out as the only noteworthy member of the kaiju cast. The appearances of veteran actors Akihiko Hirata and Hiroshi Koizumi lend some weight to the people scenes. With its frenetic battles and amazing pyrotechnics, Godzilla vs. MechaGodzilla at least provides some colorful bang for the buck.