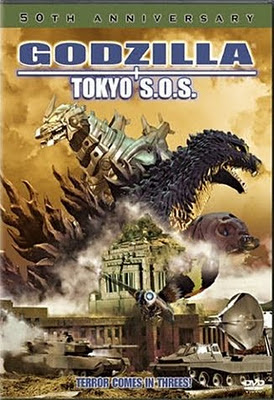 Godzilla: Tokyo SOS is a direct sequel to Godzilla Against MechaGodzilla (2002), as well as the original Mothra (1963), and features the return of “Kiryu”—the fourth incarnation of Godzilla’s mechanical counterpart. After a virtual stalemate between Godzilla and Kiryu in the previous film, Mothra appears to join in an epic battle between the monsters, and Tokyo is once again in a big heap of trouble.

Following on the heels of 2002’s Godzilla Against MechaGodzilla, Godzilla: Tokyo SOS might easily be considered the “second half” of its predecessor; both films feel incomplete in the absence of their companion pieces. Like the rest of the Millennium Godzilla series, these two entries disregard the existing Godzilla mythos (except for the original 1954 Godzilla), though the ties to the original Mothra (1963) are clear and very refreshing—especially return of the likeable Professor Chujo, played by Hiroshi Koizumi, who originally starred in the role. Sadly, Koizumi gets entirely too little screen time here, but his scenes do add a certain poignancy for those familiar with his work in the classic Showa-era Toho films. Kumi Mizuno, one of Toho’s exceptional female stars of the 60s, also reprises her role from Godzilla Against MechaGodzilla as Japan’s prime minister.

Godzilla exudes that certain charming menace that has characterized him throughout the Millennium series, and Mothra has never looked better. Exciting monster battles and high-quality special effects largely make up for substantial shortcomings in the story and characterization departments.