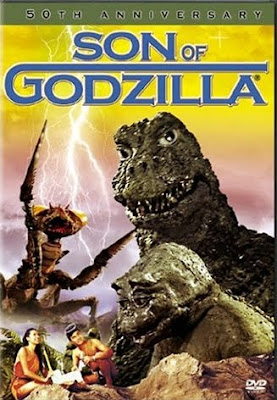 A group of Japanese scientists set up a station on Solgel Island to conduct weather control experiments. However, an accident causes their experiment to go out of control, and several gigantic, mutated preying mantises are created. In turn, they unearth a gigantic egg, from which an odd reptilian creature emerges—Minira, a.k.a. Minya, the son of Godzilla (once dubbed "Tadzilla" by Forry Ackerman in the pages of Famous Monsters of Filmland, and the name stuck). Soon, Godzilla emerges from the sea to save his offspring from the predatory monsters. He has no sooner defeated them when another mutant, a hideous giant spider, appears, and the monsters engage in another ferocious battle. To save themselves, the scientists commence a new weather experiment, this time turning the island into a frigid, snow-covered wasteland, forcing the monsters into deep-frozen hibernation.

Son of Godzilla is often maligned by fans, citing Godzilla's "cute" offspring and the decidedly inferior Godzilla suit as its primary weaknesses. However, the story is highly imaginative, and the ensemble cast includes some of Toho's finest talent. The giant, mutated island creatures—a trio of monstrous preying mantises (known as Kamakiras) and a huge spider (Kumonga, a.k.a. Spiga)—come off remarkably well, particularly in the battle scenes.

While Son of Godzilla ventures farther into juvenile territory than past entries in the series, it features some clever humor, exciting action, and occasionally brilliant special effects. The film never received a theatrical release in the United States, and having been relegated for years to airings of second-rate prints, the movie is done reasonable justice by Sony's beautiful-quality DVD. No extra features of any note, alas.