The Mysterians Want Our Women! 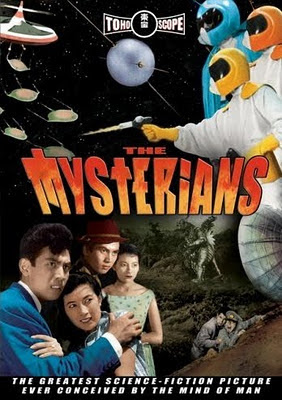 Fifty years after its original release, The Mysterians (Chikiyu Boeigun) has landed in America on DVD, courtesy of Media Blasters/Tokyo Shock, not only uncut, but in its original widescreen format (2.35:1). And unlike the Sony 50th anniversary releases of numerous Godzilla films, this package contains a number of special features (which are reportedly identical to the Toho [region 2] release). Choices of audio include 5.1 surround sound (Japanese and English), mono (Japanese, English, and Spanish), an isolated music track, and commentary (by former SPFX directors Koichi Kawakita and Shinji Higuchi); English subtitles are available. The DVD also features storyboards, a still gallery, and previews of other upcoming Tokyo Shock titles (which include Dogora, Gappa, Matango, and Varan.)

Some of us no doubt remember watching the RKO version of The Mysterians on television in the 1960s—usually a poor-quality pan-and-scanned print, with an oddly warbling music track; I've met few, if any, individuals fortunate enough to have seen it during its original domestic theatrical run. I can vividly recall watching the movie on our black-and-white TV set when I was in elementary school and being gripped by the moody atmosphere of its first half and dazzled by the action in the second. (As an aside, it can be safely said that this film contributed significantly to my incipient, juvenile pyromania; I once incurred the wrath of God by pouring lighter fluid around the bases of our household shrubs, striking a match, and then running to tell my parents, "Look…all the trees. They're burning from the roots!") The Mysterians was the first non-Godzilla Toho movie I saw as a kid, and to this day, it remains my favorite.

During the 70s and 80s, the film virtually disappeared from American television. Eventually, as did many of us who collected all things Toho in the 80s, I picked up a copy of the original Japanese version, though sans subtitles; of course, having memorized the English soundtrack (thanks to audiocassette) during my teens, I was able to provide my own mental dialogue for the film. Still, for so many years, the only option for acquiring a decent quality, wide-screen, subtitled copy of this, and virtually any other Toho film, was to go the bootleg route. Toho has spent lord knows how many fortunes combating bootleggers, mostly unsuccessfully; however, during the past year, we have strong evidence that the obvious answer has dawned on them at last, and this DVD edition of The Mysterians is a shining example of how money might be channeled away from unauthorized outlets and back to Toho.

The Tokyo Shock DVD features a good quality print; on one TV screen, it struck me as slightly faded and a tad reddish, but on my other, the colors appeared lush and true. Scratches and skips are virtually nonexistent. The Japanese soundtrack suffers from a bit of background noise—hissing, popping, and crackling—but the stereo separation and depth of sound, especially on the musical track, are surprisingly good. The English dub is not the original U.S. version, which featured a memorable job by Jay Bonafield (supervisor), Carlos Montalban, and Peter Riethof, but a recent re-recording by Bang Zoom Entertainment (I kid you not). Alas, the new dubbing is insipid, with ridiculously exaggerated, non-Japanese accents and poor matching of voices to characters. In fact, one of the voice actors is billed as John Smallberries (and if you've seen The Adventures of Buckaroo Banzai, you'll know about John Smallberries). Also-though the English vocal track is crystal clear, the volume of the music and sound effects is significantly lower than on the Japanese track.

The Mysterians offers one of the most interesting depictions of aliens speaking in an Earth tongue, by way of using two vocal tracks. When a Mysterian speaks, his "natural" voice is a low, muttering tone, and the translated line is layered above it, slightly delayed. Unlike the RKO version, which merely gave the Mysterians somewhat tinny, scratchy-sounding voices, the Bang Zoom dub preserves the original alien voice beneath the translated one. However, given the English track's inferior quality, I am personally inclined to forget it exists and stick with the Japanese soundtrack and subtitles.

Although the opening credits are not translated, at the end of the film, full credits roll for the Japanese, English, and Spanish productions, accompanied by the urgent strains of The Mysterians battle march.

Apart from the horrendous English dub, the flaws of the Tokyo Shock package are relatively miniscule, and the extra features add value to what I consider an essential film. The Mysterians is one of Toho's science fiction masterpieces, with a first-rate cast, some of Eiji Tsuburaya's most noteworthy special-effects work, and an unforgettable Ifukube score. It's high time it received a decent presentation in the U.S., and I'm excited to see that Tokyo Shock will be releasing several more daikaiju flicks in the near future—hopefully of comparable quality to The Mysterians.