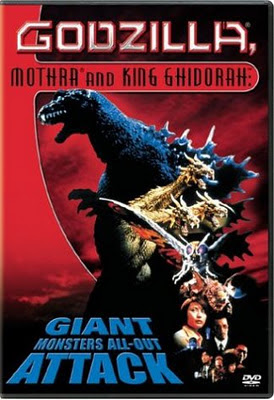 Nearly fifty years after the first Godzilla laid waste to Tokyo, a new one rises from the sea—not merely a rampaging, radioactive prehistoric horror, but a demon animated by the souls of those killed in the Pacific during World War II. Three guardian monsters from ancient legend—Baragon, Mothra, and King Ghidorah—appear and engage Godzilla in battle, intent on saving Japan from total devastation.

This 2001 entry in the Godzilla series is easily the most "controversial" of his films; it is either panned or praised, with few taking the middle ground. Godzilla's revised origin—as the manifestation of angry human spirits—departs from his traditional science fiction roots and follows the fantasy-oriented path director Shuseke Kaneko introduced in his three Heisei-era Gamera films. While some approve of Kaneko's reworking of the Godzilla mythos, the fantasy story unfolds clumsily, and lacks the development that such a drastic new approach requires to succeed. Godzilla himself appears strikingly different than ever before, with pure white eyes to accent his villainous character. However, the flabby and rather ungainly suit often comes off as more comical than menacing. And the inclusion of an anemic-looking King Ghidorah—traditionally the most evil kaiju in the Toho universe—as one of mankind's benefactors falls on its face.

GMK features some excellent visuals as well as a unique electronic score by Kow Otani, which perfectly augments each scene. The human drama is a tad more engaging than in most of the Millennium series, so even with its shortcomings, the film manages to be entertaining.
Posted by Stephen Mark Rainey at 10:14 AM