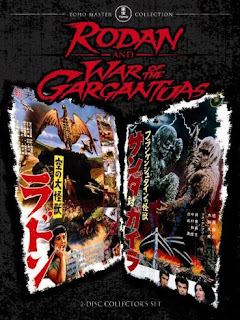 War of the Gargantuas (Furankenshutain no Kaijû: Sanda Tai Gaira, 1966)

DVD Description:
Released by Classic Media; double-feature with Rodan, the Flying Monster; Japanese and English versions of both films; documentary

Originally titled The Frankenstein Brothers: Sanda vs. Gaira, the film is a sequel to 1965's Frankenstein Conquers the World (released on DVD in 2009 by Media Blasters/Tokyo Shock). The Japanese version makes the connection clear, though the English dialogue is altered to remove any references to Toho's Frankenstein. It's of little consequence, as the gargantuas are both "offshoots" of the monster in the preceding movie.

Over the years, the terms most often used by reviewers to describe War of the Gargantuas are "cheesy," "tedious," "insipid," "goofy," and so forth, though genre fans often rate the movie relatively high on the daikaiju scale. Me, I put it right at the top of the daikaiju scale, and I'll unabashedly state that it's one of my all-time favorite monster movies. I would be hard-pressed to find a more enjoyable way to spend an hour and a half or so.

It's a rare situation indeed in which the U.S. release of a Toho movie is superior to the original Japanese version, but War of the Gargantuas is one of them. Its running time is slightly longer; the editing of the original work print is arguably more skillful; and, of all things, the alteration of Akira Ifukube's original score—usually one of the worst things the domestic release of a Toho film can suffer—is mostly beneficial. While I am a diehard fan of Akira Ifukube's music—both his film scores and classical compositions—I just can't abide the monotonous military march that rambles on endlessly behind the action scenes throughout the Japanese version. The generic music that replaces it in U.S. cut may be nothing to write home about, but at least it effectively underscores the action. Thankfully, the best of Ifukube's music—the eerie, theramin-based main theme and the re-orchestrated motifs from Frankenstein Conquers the World—are left intact. In some places, cues from Monster Zero have also been inserted; they're not really necessary, but neither are they distracting. My understanding is that Henry Saperstein, the U.S. producer (and Toho's co-financier), had no love for Ifukube's martial themes either and felt no shame in "fixing" them. Can't fault him for that!

For a Toho daikaiju pic, War of the Gargantuas is unique in several ways, one of the foremost being that Gaira, the green one, is shown devouring humans. In fact, the whole reason for his rampage is to find food. There's something far more menacing about a monstrous critter with an appetite for human flesh than one that comes to town because it likes to dine on fissionable materials. Secondly, the anthropomorphic monsters act and interact with distinct intelligence, unlike the reptilian monsters that generally attack like some impersonal force of nature. Relevant to this point, the monster suits are constructed so that we see the actors' actual eyes, rather than painted Ping Pong balls; as such, the Gargantuas' faces are more than customarily expressive, and Gaira's face in particular can be quite horrifying. In numerous scenes, the lighting and camera angles imbue him with a distinctly demonic look. Let me tell you, if I were out geocaching one day and saw Gaira pounding through the forest toward me, my drawers would be shitting themselves.

At the movie's time, Eiji Tsuburaya's special effect work was at its pinnacle, and he and his crew outdid themselves for this one, particularly during Gaira's rampage through the mountainous countryside and the subsequent military attack. I find the well-staged, tactically sound counterattack on the monster(s) highly engaging, especially the all-out laser and maser-cannon assault on Gaira, just before Sanda's appearance (which, again, is better staged in the American version). It's one of those rare moments in Toho's monster history when the human forces very nearly come out on top, and the monsters suffer and express physical pain.

Toho's cast of regulars, including Kenji Sahara, Kumi Mizuno, Jun Tazaki, Yoshifumi Tajima, and others, are joined by Russ Tamblyn, who undeniably sleepwalked through his role as Dr. Stewart. However, he's perfectly acceptable in the part; he looks and sounds just like one of the physicians I knew back in my old hometown at the time. If anything, Dr. Southworth might have been less animated....

At any rate, this release of War of the Gargantuas actually had me excited about a giant monster movie again. That's certainly been a long time coming. There's not much in the way of Classic Media's customary extras in the package (though there is an hour-long documentary called "Shrinking Godzilla Down to Size," produced by Steve Ryfle and my friend Ed Godziszewski), but for two versions of two very worthwhile movies, it's damn near a steal.