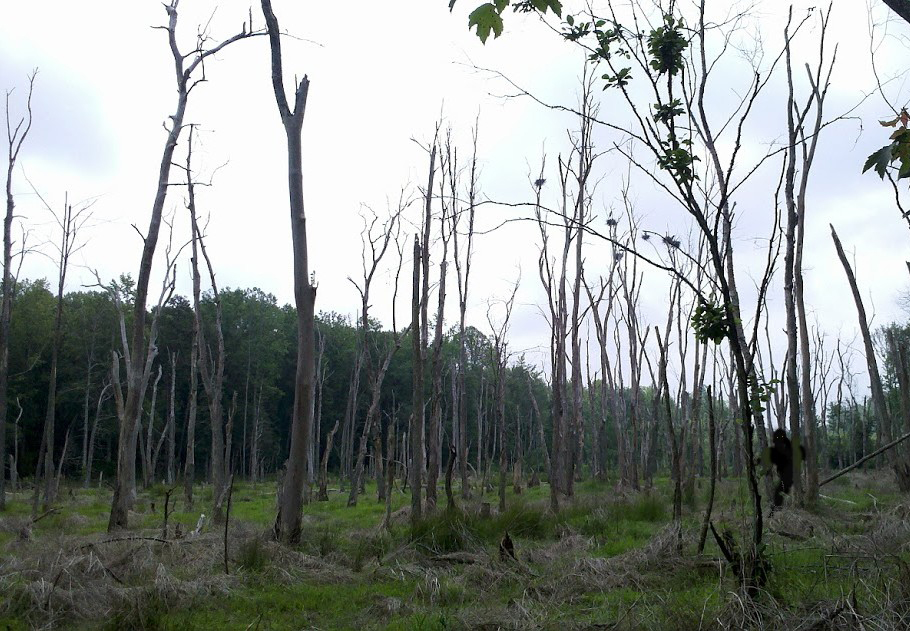 My next novel in Elizabeth Massie's Ameri-Scares series is for the state of Ohio. This one is tentatively titled Fear the Grassman! because it's about... you guessed it... the Ohio Grassman, which, according to local legend, is a kind of Bigfoot creature. In this scene, 13-year-old Landon Shrewsbury has experienced a terrifying, sleepless night. From the darkness outside his window, he has heard thumping, growling, and a strange, rhythmic rapping. When the sun finally rises, he gets out of bed before his parents, summons his courage, and creeps outside to look for evidence of a nocturnal visitor....

A gust of frigid wind slapped Landon in the face. From the woods at the edge of the yard, swaying tree limbs clacked, clattered, and groaned. To his left, an expansive meadow of dead, brown grass separated his house from the Wickliffes’ place, half a mile distant. In the middle of the meadow, he saw the jagged silhouette of an ancient, teetering barn, which he and Danny sometimes used as a clubhouse. Mom and Dad didn’t like him playing there. They said it was dangerous and might collapse. But that had hardly stopped him from claiming the place as his own. To the right, beyond a wide, withered cornfield, a steep, humpbacked ridge resembled a gigantic, sleeping bear. He didn’t know if it had a name, but he had always called it Bear Mountain. The rising sun’s rays created a golden halo above its “head.”

He drew a deep breath, gathered his nerve, and trudged along the side of the house to his bedroom window. He studied the ground around the window, searching, searching....

Overnight, the ground had frozen as hard as stone. But a few feet from the base of his window, the dead, brittle grass appeared to have been mashed down in roughly the shape of a huge foot.

The impression wasn’t very deep, but when he knelt down and traced its outline with his fingers, he felt certain.

A short distance into the yard, he made out another impression. And another.

He stood up, lifted his foot, and stomped as hard as he could on the frozen ground.

Not even a dent.

Whatever made these had to be heavy. Maybe even as heavy as a car. Still, he knew he could never convince anyone these were actually footprints. Not without some other evidence. These impressions were too vague. Too fantastic for someone who didn’t already believe to believe.

The sound came from far away. Barely audible.

It was nothing. Just tree branches rattling in the wind.

He felt a chill at his collar. All the hairs on the back of his neck had risen to attention. There could be no mistake. Something in the woods was rapping sticks together.

And another something—this one much nearer—was rapping in response.