October 28, 2019: Montserrat
The name means "Serrated Mountain," and its towering, jagged peaks dominate the skyline from many miles away. Near the top of the mountain, a Benedictine monastery, accessible by narrow road, rail line, or cable car, nestles between the peaks. Sheltered within the monastery,  "La Moreneta"—"The Black Madonna"—serves as the region's patron saint. The figure is so named because, in the early years of the church, its varnished "skin" became stained black from constant exposure to candle and incense smoke. In later years, the statue was painted black with gold trim. Our tour guide, a young Catalan named Pol, related the legend of how, in Christianity's earliest days, a priest discovered the Black Madonna on the mountain and wanted to move it to his church. However, the statue spontaneously became so heavy that no number of men could budge it, and thus they built monastery around the Madonna.

Montserrat may be the most spectacular location I have ever visited. Once on the road out of Barcelona, we could see the silhouettes of the distinctive, jagged peaks against the horizon. As we drew nearer, our tour bus turned onto a long, winding road that grew steeper and steeper as we ascended. From several overlooks, we could see far down into the mist-shrouded valleys and occasionally glimpse the peaks of the Pyrenees Mountains beyond.

Once we arrived at the monastery, we saw sidewalk vendors selling cheese, gift shops, a restaurant, and a little rail station. In the gift shop, one could sample the liquor that the monks at the monastery make. Terry, Beth, and Brugger all sampled it and gave it their stamps of approval. Me, I broke away long enough to go after a geocache hidden along a rocky, winding trail not far from the monastery, and thus I didn't try the drink. No matter; there would be plenty of spirits flowing over the course of the day.

There is a virtual cache here that I would love to have claimed, as its various stages take you to several of the most striking locations at the monastery. I went to those around the exterior, but to claim the final stage one must visit the interior. As it happens, the Escolania de Montserrat—the Montserrat Boys' Choir—was scheduled to perform, and setting foot inside meant standing in a line of such length as to be prohibitive. So, I didn't get the smiley, but I did see some beautiful sights, such as the Ave Maria path, an atmospheric chamber full of glowing candles.

The Montserrat Funicular is a train that runs on damn near vertical tracks, operated by cables, by which one can ascend to a high mountain path. This trail leads to St. Michael's Cross, which overlooks the valley from a high point on the mountaintop. In the photo at left, you can the two train cars which run on the same track but for the short stretch where they pass each other. I would love to have ridden this thing to the top, but Brugger proclaimed the prospect a great big NO!—at least until it was almost time to leave, at which time she decided, "Well, I guess I could go for that after all." Too late! Anyway, I could happily return to Montserrat and spend more quality time. On this relatively short visit, I felt as though we barely scratched the surface of this spectacular, historic location.

We did scrounge up a decent lunch in the restaurant here. Shortly afterward, we boarded the bus again, this time to head to a nearby vineyard for—you guessed it—more wine and tapas.

We hated to leave Montserrat, but Oller Del Mas winery awaited us at the bottom of the mountain. Here, we enjoyed a substantial tasting along with some delicious tapas made at the vineyard. Of the Spanish wines we sampled during our stay in Cataluña, these rated among the best, although nothing on this trip rivaled the quality of the wine at Coali, which we had visited in Italy's Valpolicella region the previous week.

After our tasting and tour of the winery, we had a brief respite before the tour bus returned to pick us up. About a quarter mile from the winery, a geocache hid down in a small grove, at a stone hut with picnic tables around it. Figuring I could at least give it a cursory search, I rushed to the grove to try my luck, but it was in a target-rich area, and I didn't have time to give the cache a thorough hunt. So, I ended up walking away without a find. Still, that's just all the more reason to return to Montserrat at the earliest opportunity....
Back in Barcelona, rather than go out to a restaurant for dinner, our group visited the huge SuperMercat in Catalunya Square, now bereft of demonstrators. We picked up some assorted edibles—barbecued spare ribs para mi—and a few extra goodies to get us through the final night of our incredible sojourn in the Mediterranean. Come morning, we needed to depart for the airport at an early hour. Thankfully, it didn't appear that any protests would interfere with our journey back home.

October 29, 2019: The Longest Day
The lot of us crammed ourselves into a taxi bound for the airport early on Tuesday morning. Massive mobs at check-in and security appeared foreboding, but we managed to get to our aircraft—a British Airways Airbus 330—with a little time to spare. Our connection was at London's Heathrow, which proved a bloody nasty experience. I can safely say I never want to visit Heathrow again, at least not for a connecting flight. Here in the States, people often complain about Atlanta's Hartsfield International, but having flown in and out of Atlanta countless times in recent years, I can tell you that Hartsfield is a bleeping picnic, even compared to Philadelphia, also very much a no-fun airport. Anyway, once we boarded our aircraft for Philly—a British Airways Boeing 747—we hoped we could soon get ourselves free of Heathrow once and for all.

Well, no. We sat on the ground with both traffic delays and equipment issues for well over an hour—long enough to start cramping up in the uncomfortable seats before we even got airborne. At last, though, we roared into the skies, and on this flight, we had paid in advance for the bottomless bar, of which we took some small advantage. I've flown in a bazillion different aircraft, but this was actually my first flight in a 747, and I kind of enjoyed it. Not that we had luxurious seats or anything, but at least the setting was anything but claustrophobic. The airline served us plenty of food and drink, and it all turned out to be remarkably decent.

For in-flight entertainment, I opted to watch The Mule, the Clint Eastwood film that was running on the Rhapsody while Brugger and I enjoyed our evening in the hot tub. It was kind of neat to watch it on the plane, and while it's not great cinema by any means, I did enjoy it. I followed this up with The Avengers: Endgame, which was kind of okay. So, the two movies ate up a good two-thirds of of the seven-hour flight. Since we were flying into the sun, daylight lasted an extra five hours, which made it the single longest day I have ever lived through.

Fortunately, the 747 made up time in the air, so we touched down in Philly more or less on schedule. We snagged some food and drink at an airport restaurant. Then we boarded a small commuter plane bound for Greensboro. This leg went off without a hitch. Just before midnight, the four of us stepped off the plane onto our home soil.
So... two weeks and ten-thousand miles later... thus endeth a venture I could scarcely have imagined prior to it actually happening. Thankfully, for the most part during the trip, I was able to leave the crushing stress of the preceding days, weeks, and months behind. Now that I am home, I'm pretty much back in it. And I will be for the foreseeable future. But having written out this chronicle over the past few days, I now have a fair record of the trip of my lifetime. It's a chronicle I want to keep. I just pray that, till the end of my days, I'll be able to remember it without having to refer back to the record.

To friends Terry and Beth, and to Kimberly, I offer all my love and my deepest gratitude for sharing in one of the most beautiful experiences of my life. Perhaps when I needed it most. 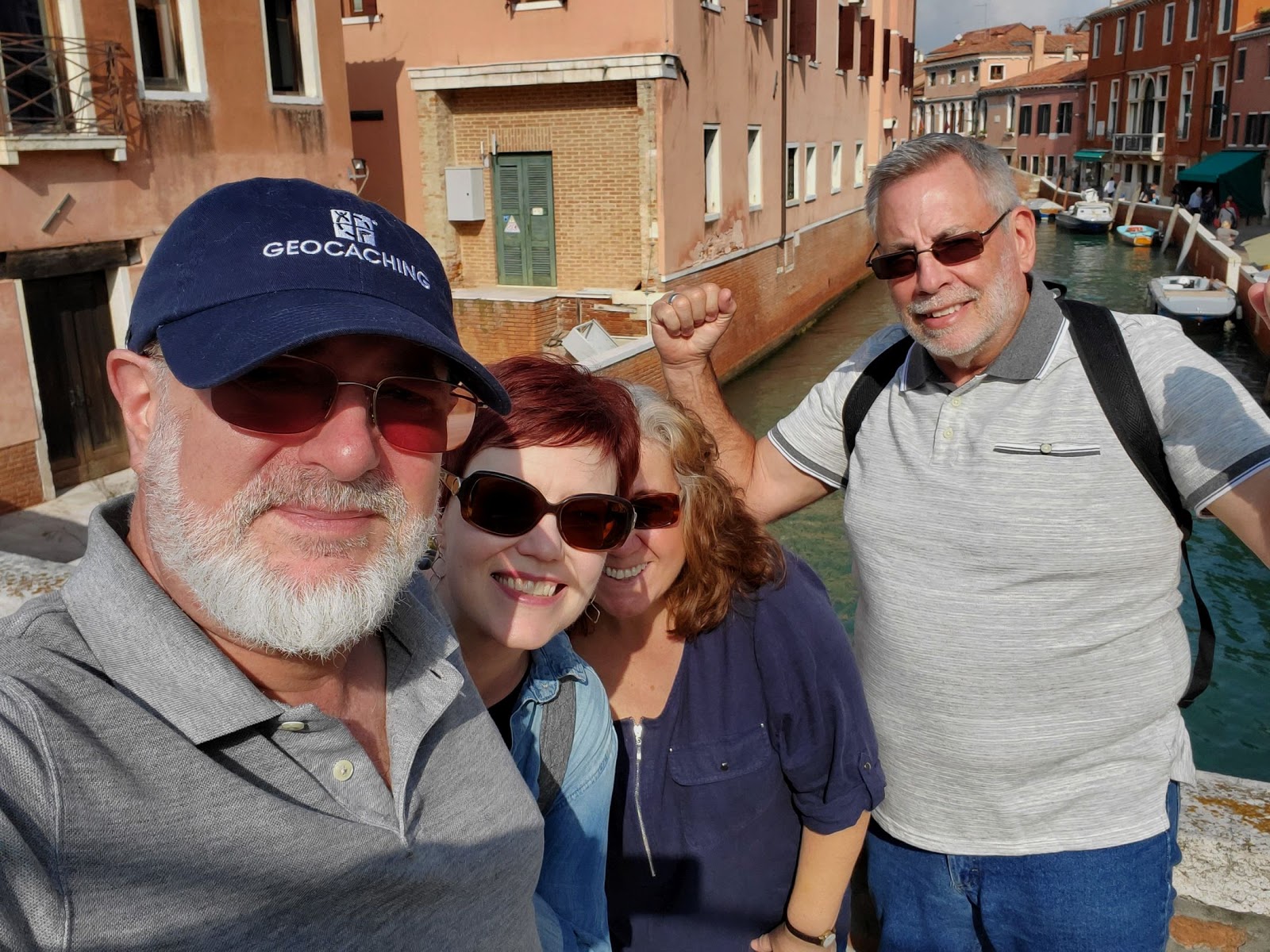 I love you and thank you too. It was a wonderful trip! :)

I also thank you for this blog. I hope not to need it in my old age but...

Maybe next time the Pacific Northwest?????

Mark, it was indeed an honor to spend this time with you and Kim, as one of the highlights of our lives. Your memorializing it with you unique perspective and writing skills makes it even more phenomenal. Thank you so much for doing so. We love you two as well and look forward to more adventures of the kind.