October 23, 2019: Tuscania
Long before we ever set foot on our cruise ship, our gang had heard from numerous sources that, while it might be spectacular and memorable, Rome is also a certified madhouse—an overcrowded, frenetic Mecca for on-the-go tourists. We all preferred something a little more low key for our return to Italy, so rather than visit Rome proper, we opted for a tour of the remote, medieval town of Tuscania and a nearby winery/olive farm that featured substantial tastings of their fare. This proved a wise choice indeed.

The Rhapsody arrived in Civitavecchia early on Wednesday, the 24th. Unlike the lovely port of Kotor, Civitavecchia is largely industrial and anything but scenic. Upon disembarking, we quickly found our tour guide and shuttle bus, settled ourselves for the ride, and off we went. The scenery on the outbound drive wasn't ugly, but neither was it particularly impressive—at least until we drew nearer to our destination. As we passed through the small town of Tarquinia, we once again began to get a sense of the region's long, rich history. Soon afterward, we reached Tuscania, a small, ancient, stone-walled city that boasts a handful of touristy establishments. As we had hoped, it proved far more sedate than most of the locations we had visited so far.

Our guide gave us a quick overview of the town, but for the most part, we were left to our own devices, a fact I particularly appreciated because a couple of geocaches awaited my attention in the city's oldest quarter. I left the rest of our party in the heart of town and set out for the caches—one located at Chiesa San Maria Maggiore, the other at Chiesa San Pietro. While Terry, Beth, and Kimberly had a fine enough time shopping and sightseeing in Tuscania, geocaching may have once again provided me with the richer experience: I got to wander down quiet, essentially deserted streets, taking in the local atmosphere and seeing at close range the beauty of this centuries-old town. The walk turned out to be just over a mile round trip, and the caches were both creative and well-hidden.

I rejoined our party just in time to board our bus to head for the olive farm/winery for cicchetti and spirits. We found the fare here delicious, the setting peaceful and scenic. Plus, as with so many places we visited in Europe, there were cats. These felines were quite sociable, and after our light lunch, I made friends with a sweet little kitten who seemed at least as interested in our company as our lunches. Once finished with our vittles and vino, we returned to the Rhapsody, though with plenty of time before sailing again late in the afternoon.

So, rather than while away the rest of the day on the ship, we decided to venture back out and wander around Civitavecchia. This port city offered a few of the usual establishments for eating and drinking, a couple of which we checked out. I did hunt another cache—this one, of all things, commemorating the World Trade Center attack on 9/11. The cache proved tricky, but again, it was nicely done. A favorite moment in Civitavecchia was stumbling upon the entrance to a music hall established in honor of my favorite film music composer, Ennio Morricone, best known, at least in this country, for his Italian western movie scores.

Back on the ship, we enjoyed another fine dinner with our regular group. Charles still refused to bring me extra cake when I informed him it was my birthday. Nancy and Marsha had indeed gone into Rome, which they enjoyed, but confirmed that, yes, it was a bleeping madhouse. Now more than ever we were glad we had avoided that particular onslaught of humanity and appreciated our perhaps less well-known but far more relaxing destinations. 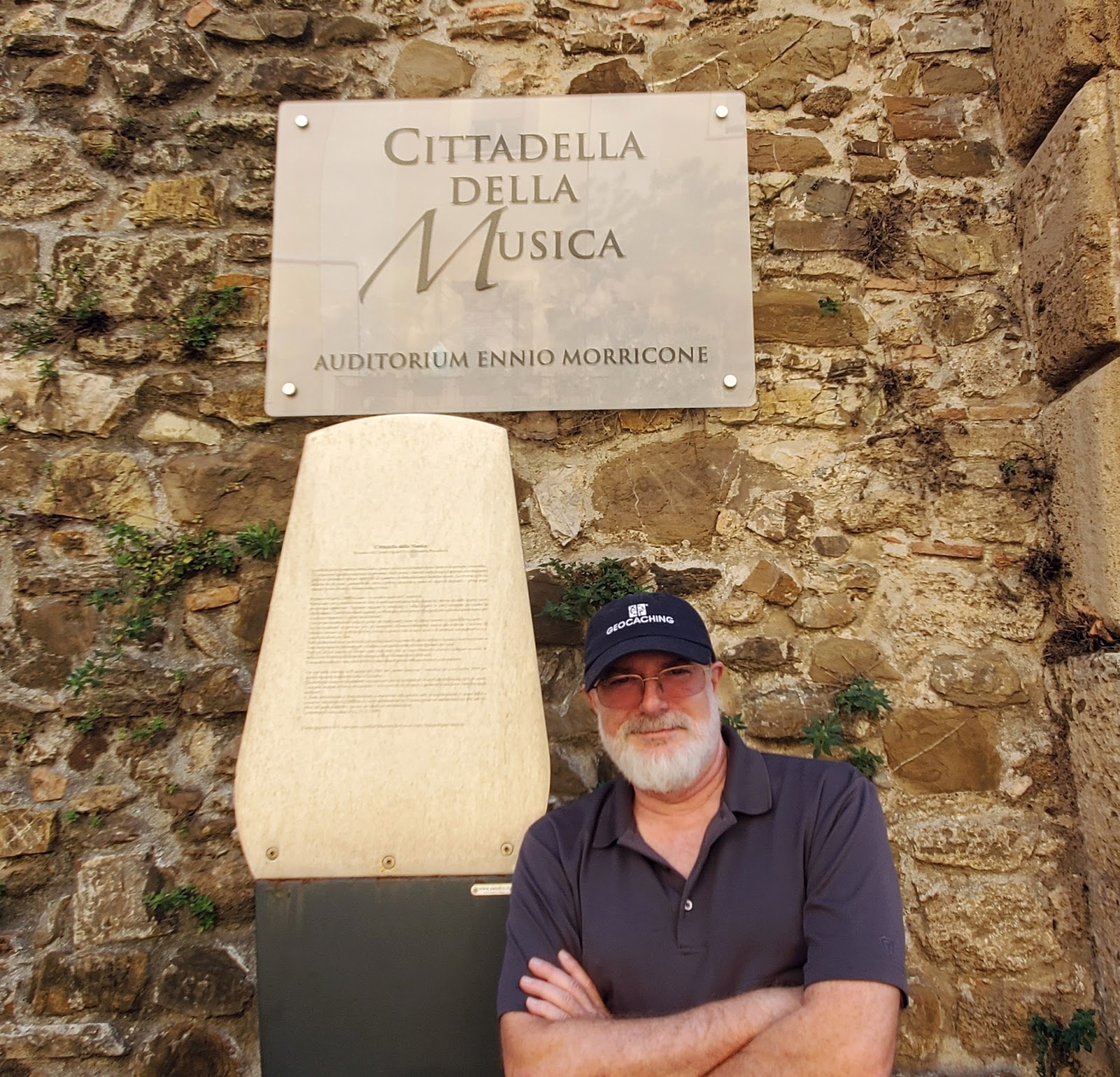 If our Tuscania outing had made for a tranquil day on Wednesday, our excursion into Florence on Thursday most certainly did not. The Rhapsody pulled into the port of Livorno, which services both Florence and Pisa, well before we woke up. From Livorno, we rode into Florence by way of the express train from hell. Hell, I say, due to the extreme heat within, a mysterious misery that Italians seem to ubiquitously embrace. Even in temperatures of 70°F, most of the population walked around bundled in jackets and scarves, and the interiors of buildings and public transports virtually always hovered in the near-unbearable range for us hot-blooded Americans. We had one tour planned in Florence: the Uffizi Gallery, which contains works of art by Michelangelo, Da Vinci, Botticelli, Caravaggio, and many other artists of great historical renown. Unfortunately, this was the one day of the trip that it rained—prodigious amounts, all day long. I don't know how Rome would have compared, but Florence overflowed with muggles, so that getting from place to place turned out to be far more problematic than any of our other destinations. Getting around the Uffizi Gallery proved to be worst of all.

Kimberly had paid premium prices to get "Skip-the-Line" tickets, which we figured would get us past the madding crowd; indeed, we got past one madding crowd, only to be thrust into an even bigger one before we could enter the gallery. But once we did—I swear to Yog-Sothoth—the place was a mob scene. One could barely walk, and the crowd noise rose to galling levels. Museum staff members began shushing people in the various galleries. It was almost embarrassing to be among the tourists wandering around in there. We did see any number of fantastic works of art, but it wasn't long before the atmosphere in the place became so oppressive that we all just wanted out. And that is where we ran into our biggest obstacle: finding a goddamn uscita (exit).

Countless signs labeled uscita directed us down specific corridors. Yet each one led only to another gallery, each a dead-end. Eventually, we asked a museum staff member for assistance. He pointed us in a whole different direction, and at last we were able to find our way down to the first level. Here, on occasion, we could actually see the street—but always through doors labeled "emergency only." So again, we had to thread our way through a seemingly endless maze of corridors, galleries, and stairways. We followed one uscita sign after another, often coming tantalizingly close to the great outdoors, only to be foiled again, again, and again.

At last, when we finally did reach a bona fide exit, a museum staff member demanded our tickets. Apparently, one needs a ticket not only to get into the place but out of it. The problem was, by this point, some of us had apparently tossed them, and I had stuffed mine into one of the pockets of my hiking pants, apparently at such depth I couldn't find the damned thing again. At last, exasperated, the lady instructed us to just move the hell on, so we would be out of her sight. And thus the last vestige of any fondness I might retain for the Uffizi Gallery up and withered away.
After this debacle, we headed in the direction of the Duomo at Cattedrale di Santa Maria del Fiore. Here, I was able to claim a virtual cache, which lifted my spirits a bit. Happily, the rain had let up, so we sought some lunch at a nearby outdoor restaurant—only to have the blasted bottom fall out again as soon as we sat down. Canopies partially covered the tables, but on occasion, rivulets of cold water poured down our backs and prompted us to emote by way of hollering. The food, at least, hit the spot.

Some places in Italy we hated to leave. Florence was not one of them. To be fair, on the day in question, no less than six cruise ships docked in Livorno had dumped veritable hordes of humans into the region. And the rain certainly complicated matters. Florence surely has plenty of historic treasures to offer; it's just that, for us, circumstances at the time didn't quite gel for optimum enjoyment. I would happily give Florence another chance on some future trip.

Once out of Livorno, we left Italy behind once and for all. I will say, whatever discomforts we sometimes faced, all in all, I found Italy an altogether alluring and agreeable place, and I so want to return someday, particularly to Venice and Verona.

Over the course of the week, we had quite enjoyed our time on the Rhapsody, but now we could see the end of the voyage approaching, which did bring on a sense of melancholy. On this evening, Terry and Beth retired fairly early, so Brugger and I settled ourselves in the ship's Schooner Bar for Prosecco (Brugger) and Campari Spritz (moi). Our regular dinnertime companions Dave and Jane happened to be heading to the bar at the same time, so they joined us and we spent an enjoyable spell exchanging anticdotes of no small amusement. Then, sometime around 11:00 PM, Kimberly and I decided to visit one of the outdoor hot tubs on the upper deck. A wonderful chilly breeze was blowing, and we were all but alone up there; a handful of folks had settled in one of the other hot tubs, but we were barely aware of each other's existence. Each evening of the cruise, a movie ran on the upper deck's outdoor movie screen, and tonight, The Mule, starring Clint Eastwood was playing. We didn't pay it that much mind, but it did seem kind of nice, almost like being at a drive-in theater while at sea. I haven't had a more satisfying, relaxing spell since I don't know when. Of all our experiences on our Mediterranean trip, this one stands out as a true highlight.

Our next port of call would be Marseilles, France, although, once again, we decided to bypass that well-known city and visit the smaller, somewhat less touristy town of Aix-en-Provence, a short distance to the north. Aix would yet become another of our favorite stops on the continent.