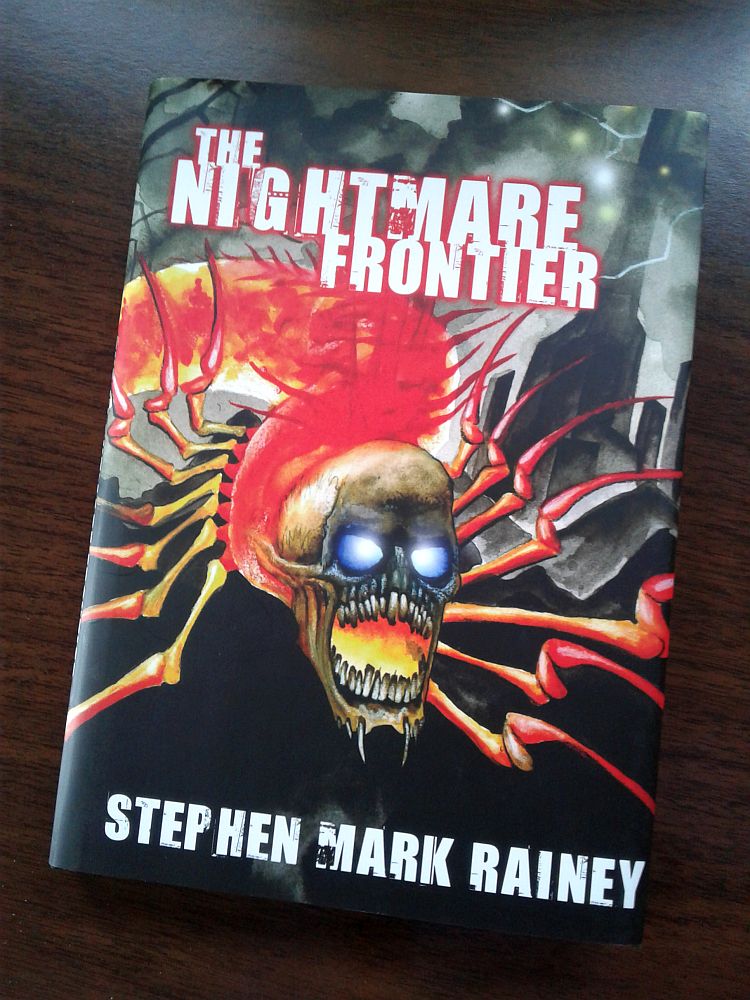 The Long Version: I have related the inspiration for The Nightmare Frontier on this blog before, but the other day, when I was shuffling some shit in my office, I happened to look upon the 2006 Sarob Press hardback cover art (by Chad Savage). It brought to mind, very vividly, the vision that inspired it — truly, one of the most terror-filled moments of my adult life.

It was late evening, and I was drowsing on the couch in the living room, dark but for a few streamers of light filtering in through the Venetian blinds. I was aware that I was lying on the couch, yet peculiar images were beginning to waft up from my subconscious. As I lay there, I noticed a pool of warm, golden light forming in the corner of my vision. I shifted just enough to peer around the arm of the couch, and then I saw the source of the light.

Creeping across the living room floor, perhaps six feet away, there was a gigantic centipede, five feet long, its body glowing gold and red, as if a flame burned within it. Its head resembled a human skull. As I watched, the thing slowly turned toward me, and I became aware of a malevolent intelligence, observing me. The thing made no further move, but I jerked violently awake.

The most disturbing thing at that moment was that I knew I was fully awake, yet I could see a circle of golden light on the floor, slowly fading. It vanished only after several seconds had passed.

It took some time before my nerves settled enough for me to drag myself off the couch and retire to my bedroom. By the time I finally drifted off to sleep again, I had a rudimentary plot in my head for the novel that was to become The Nightmare Frontier.

In the novel, you will encounter these critters. They are known as the Lumeras.

The Nightmare Frontier at Amazon.com
Posted by Stephen Mark Rainey at 10:04 PM