A Graveside Chat with Kathe Koja

Kathe Koja’s name hit the heights early in her writing career, with the release of her acclaimed first novel, The Cipher (1991, Dell-Abyss) which showcased her fresh, unique voice as well as a distinctly dark tone. Since then, she has written numerous novels (her latest is titled Dark Factory), YA novels, short stories, and essays — and has added director and producer to her credits. Her work has won the Shirley Jackson Award, Bram Stoker Award, ASPCA Henry Bergh Award, and the Deathrealm Award, among others. Through her company, Loudermilk Productions LLC, she stages immersive events with musicians, visual artists, dancers, fire performers, and scent creators. Kathe is based in Detroit, thinks globally, drinks coffee, and dances to techno whenever she can.

AGC: Your first novel, The Cipher, attracted significant attention, both with critics and with readers; Josh Malerman has called it “a stone-cold landmark of the genre.” Since then, you have been an author (or perhaps “creator” is a better term) to reckon with. Your distinctive prose tends to have a vivid, organic flow; one might say an overwhelming sense of immediacy. Can you pinpoint any specific influences or inspirations for your style? 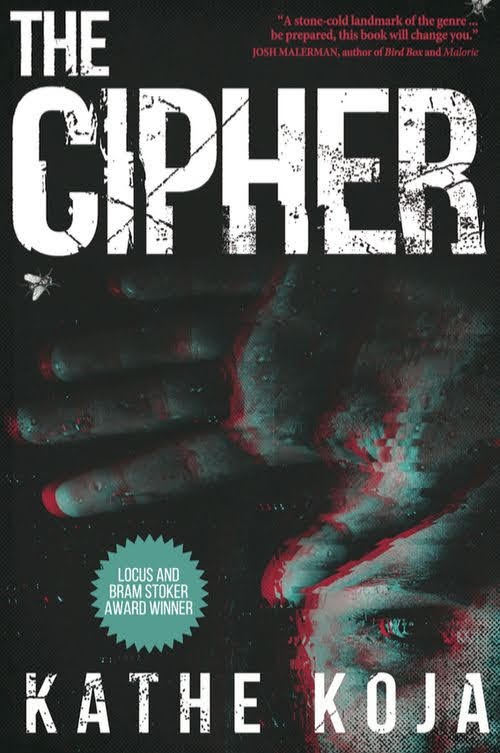 KK: Style is voice, right, it’s as unconscious and integral as speech, we don’t consider how we speak, we just talk to each other. I remember wondering, years ago at Clarion Workshop, if I had a style, and was assured by Kate Wilhelm that I did. And Shirley Jackson’s brief, masterclass essay, “Notes for a Young Writer” assured me that stories should move, that nothing should be on the page that doesn’t absolutely belong there. You go a lot faster when you throw out the deadweight.

As a reader, I’ve always sought out and reveled in writers — like Anthony Burgess, like Angela Carter — whose relationship with words is headlong and exuberant, so my work tries to do that too, keep the play in wordplay.

AGC: Many of your works involve marginalized, “misfit” characters, who seek, knowingly or unknowingly, to transform themselves. Can you identify any specific factors — social, personal, political, or dramatic — that shape the identities of your characters? Do you have any characters to whom you relate more personally than others?

The first thing I see before I write anything is a character, and it’s that character who forms the nucleus of the narrative. So I relate to them all, I feel for them — even the ones I don’t “like,” even the ones no one likes, like Nakota in The Cipher — or else I couldn’t write them, I’d run the risk of them becoming cardboard markers just moving that narrative along. I do have favorites, though. (Remember when your mom said she didn’t have a favorite kid? She lied.) In my newest book, Dark Factory, it’s Ari Regon — he’s up for anything, he’s anything but introspective, he’d be huge fun to hang out with — though Ari is a different kind of rebel: he pushes things further and farther, seeks transformation, out of pleasure, not pain.

And “misfit” can be taken as a compliment, right? To be unable to fit into something that’s wrong for you, that refuses to give space to you, is not a bad thing. And to have courage enough to play with and push those limits is not too shabby either.

AGC: You’ve published novels for young adults as well as for us older folks. Do you find writing for a younger audience appreciably different than writing for... shall we say... more seasoned readers? In your YA work, how much do you tackle what some might call controversial topics or particularly graphic imagery? Do you aim to write more books for your YA readers? 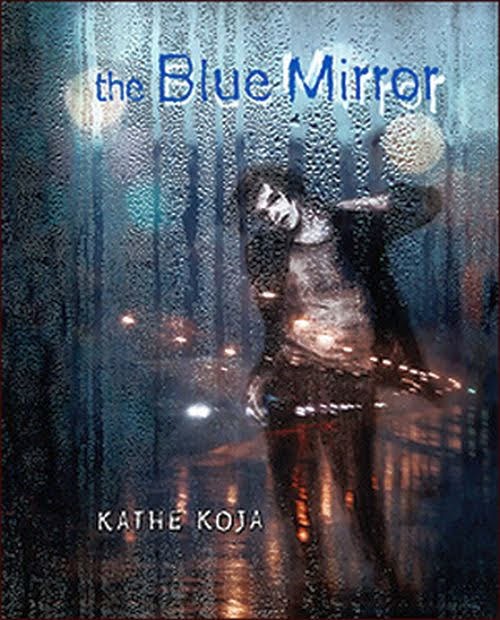 KK: I had the amazing good fortune to publish seven YA novels with a legend for an editor: Frances Foster of FSG, who modeled and affirmed the belief that YA is every bit the equal of any literature for adults. Because it is. And I found that I had to be even more economical and on point for younger readers, because they have less patience for bloat than adults.

And I made certain to be as honest — utterly, hopefully honest — as possible, even in novels that were very dark, like The Blue Mirror, that follows young artist Maggy as she confronts the inner darkness that blinds us, and Going Under, where siblings Hilly and Ivan are stalked and manipulated by an adult evil that hides behind a therapeutic smile (both horror novels IMO). Because younger readers, unlike some adult readers, are still able, and are fully willing, to take in new information that may change their minds and their worldview. If you’re talking to someone who’s listening, you make sure to tell all the truth you know.

And yes, I would love to write more YA!

AGC: Your immersive events and adaptations of classic as well as your own works look absolutely fascinating. How did you come to develop these events? You clearly have a very active role in their production; can you give us an idea of what audiences/participants experience during these events? (As an aside, the video I’ve seen of your Dark Factory book release really makes me regret I wasn’t in Michigan at the time.)

KK: Making the book trailer for Under the Poppy, my novel about Victorian puppeteers, got me involved in creating performances — I produced immersive events with artists, actors, dancers, musicians, fire perfomers, scent creators... So many amazing and dedicated creative people who wanted to play along in these worlds that we devised for our patrons. (We always said “patrons” instead of “audience,” because being a patron is more participative, less passive.)

And each one was different. My Dracula was structured as a dinner party in the basement of a historic mercantile building, where Dracula is interviewing Jonathan Harker, and patrons were at the table too, everyone moving down a seat, closer to Dracula herself as the night progressed. My Alice in Wonderland, called ALI<E, set the patrons loose in a preschool, where the Mad Hatter, the Red Queen, and the Carpenter brought existential questions to violent life — being menaced by the Red Queen is an experience in itself! And recreating Christopher Marlowe’s Faustus in a church put the patrons face to face with a devil and a pack of Deadly Sins, who all had a great time scaring, luring, flirting with, and interacting with those patrons. 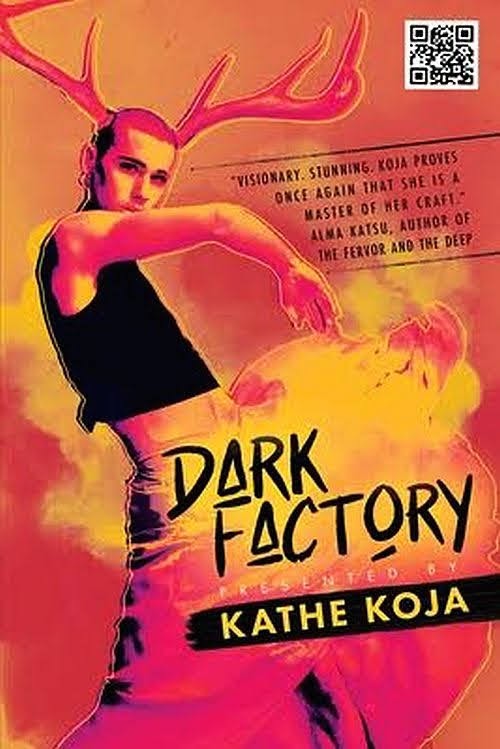 I found that making these events, creating the script, directing and producing the performance, is really very, very much like writing a novel, only you get to watch how the reader reacts! Which is what led to Dark Factory, where I’ve combined a novel with the ongoing opportunity for readers to participate — via the site, or by entering one of the contests (the mask contest was wild), or by an interview with one of the characters, or on social media — so that anyone who feels moved to be part of the club can do that, can help create the Dark Factory experience. And fiction, the act of reading, has always been immersive, but now we can take it a step further. And Meerkat Press was such a badass collaborator in creating this experience, which takes the act of publishing a step further, too, expanding the idea of what a novel can be — and the preorder folks got a swag pack that was the first, as far as we know, to include condoms (play safe!). And we’re still extending the story, this time with an eye on VR... Because everything we make in the real world corresponds with something in the novel — the sparkling drink fountain and floating bubbles and masked DJ at the Detroit launch, the studio setting and blasting techno of the Atlanta launch — the novel and the real world hold hands, they dance, and together define a third reality.

AGC: Okay... whatever topic, have your say. Anything you want — or have wanted — to share, go for it!

KK: One of the great lessons of making — a novel, a story, a show, anything — is that life, and how we choose to live it, is supposed to lead us to joy. That’s almost a strange thing to say, now, a contradictory thing when we’re in such an awful moment of history — but maybe it’s the moment where we need joy most. Joy creates, joy bolsters, joy makes us whole.

AGC: Thanks for taking the time for A Graveside Chat, Kathe. Most appreciated, and I hope you enjoyed it.

KK: Thank you for inviting me!

Visit Kathe Koja on the web at kathekoja.com

Coming Soon at A Graveside Chat: Tim Waggoner,
and many more!

Posted by Stephen Mark Rainey at 8:00 AM