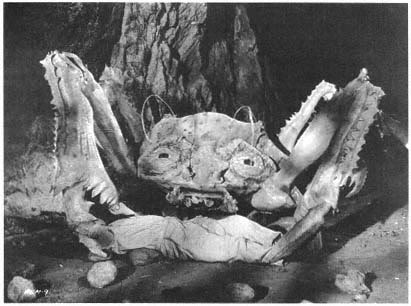 Turner Classic Movies ran Attack of the Crab Monsters last night, or rather, early this morning, at 2:00 AM. This is one of those legendary Roger Corman Z-movie classics that thrilled so many of us as children in the 50s and 60s—except that I never managed to see it as a young 'un. All these years, I've felt deprived, particularly since the stills that Famous Monsters of Filmland used to run convinced me that I hadn't lived until I had seen this movie. Well, now at age 48, I've seen it—sort of—so I guess I can go to my final rest satisfied.

I say "sort of" because I dozed through bits and pieces of it, what with the late hour and all, but I caught enough of it to know that I really love this movie. It's a hootin', hollerin' super-fun monster flick, featuring semi-human-faced giant crabs that absorb the consciousness of their victims and speak in their voices to lure others to the dinner table. What's more, it features Russ Johnson, "Professor" of Gilligan's Island fame, playing a professor. There's a great opening title sequence; creepy crab sound effects; spooky, disembodied voices; and strangely mesmerizing monsters, so what's not to love?
Posted by Stephen Mark Rainey at 10:36 AM

One of the best of the 50s monster mashes. I saw this whenever it aired in the mid-late 70s when I was a kid.

Over on JOOST.com in the horror section they are running ATTACK OF THE GIANT LEECHES (hilarious)