Ebirah, Horror From the Deep 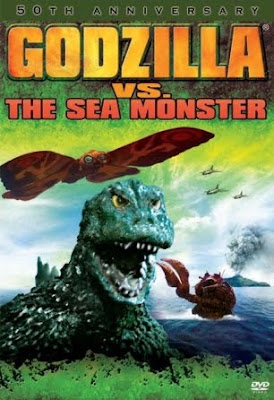 Godzilla vs. the Sea Monster (Nankai No Daiketto, 1966)

Sadly for us poor westerners, Godzilla vs. the Sea Monster never received a domestic theatrical release; instead, in 1967, it went straight to television, courtesy of the Walter Reade-Sterling Organization. The original U.S. version begins with footage swiped from later in the film of the titular sea monster (uber lobster Ebirah) destroying a yacht, ostensibly owned by Yata, the brother of our young protagonist Ryôta. However, it’s clearly the same yacht later commandeered by Ryôta (its name, Yahlen, is visible on the hull). The film then cuts to a dance competition, where Ryôta hopes to win a boat so he may go and rescue his lost brother. Missing is the actual opening from the Japanese version, in which the siblings’ mother goes to a medium, who tells her that her son cannot be found in the land of the dead, which motivates Ryôta to embark on his quest. Thankfully, this Sony release offers the full-length Japanese version, in anamorphic widescreen, with a choice of subtitles or English audio. The English dub, however, is the horrendous made-in-Hong-Kong international version rather than the superior Titra version from the original U.S release (which featured Hal Linden, TV's Barney Miller, as the voice of Yoshimura, the bank robber played by Akira Takarada).

The financial hardships that had begun to plague Japanese movie studios in the mid- to late-'60s—which would eventually lead to a near-total collapse of the Japanese film industry—began to reveal themselves in the production of Sea Monster. Rather than the intricately crafted miniature city sets that effects director Eiji Tsuburaya had overseen in earlier films, most of the monster action takes place on the much sparser Letchi Island set. Still, the monster scenes are generally well-directed and include a few superlative moments, such as Godzilla's attack on the base of the Red Bamboo (the military organization, presumably communist, that has enslaved the natives of Infant Island and is secretly building nuclear weapons) and the MIG jet assault on Godzilla.


To this time, most Godzilla movies—and the bulk of Toho's daikaiju and science fiction releases—had been scored by Akira Ifukube. For Sea Monster, Composer Masaru Sato provided the musical score, which made for a very different experience for those accustomed to Ifukube's familiar style. Sato had scored Godzilla Raids Again (Gigantis, the Fire Monster) and The Abominable Snowman (Half Human), but his greatest claim to fame was providing the the musical soundtracks for numerous films by Akira Kurosawa. His work for Sea Monster is highly enjoyable on its own, yet as a Godzilla movie score, it oftentimes seems too playful—particularly during the MIG attack on Godzilla. It's a rocking, guitar-driven piece, its riffs reminiscent of the Ventures. Some of the incidental music for scenes on the island rings of Mondo Exotica, a la Martin Denny and Les Baxter (not that this is a bad thing, said the confirmed old lounge lizard). Sato would go on to score most of the Godzilla films directed by Jun Fukuda, and while the mood his music sets deviates significantly from anything Ifukube might ever have imagined, it in its way, it certainly keeps the scores from coming across as stale retreads.
This DVD release is pretty much bare bones, with just a few trailers as extra features, but the very nice, anamorphic print of the original full-length film is certainly a coup for Godzilla completists.
Posted by Stephen Mark Rainey at 11:36 AM