Ravishing a Universe for Love! 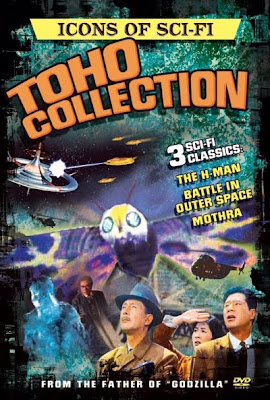 Mothra has always been one of my least favorite of Toho's giant monsters. It's a bug; depending on its incarnation, either an unremarkable, big honking caterpillar or a terribly unreal-looking giant moth. Yet Mothra has also starred in some of Toho's best Showa-era epics, from the original Mothra to Mothra vs. Godzilla (1963). Later incarnations of the critter, such as those in Godzilla - Mothra - King Ghidorah: All-Out Monster Attack and Godzilla: Tokyo SOS have been outright impressive. Go figure. Of course, then there was the 1992 Godzilla vs. Mothra. Eh. Not so much.

After the dark, somber moods set in Godzilla, Godzilla Raids Again, and Rodan, the Flying Monster, all of which were based on the disturbing premise of science gone too far, Toho opted to produce a friendlier, fantasy-based daikaiju movie. Mothra introduces a giant monster who wreaks havoc but is essentially gentle, driven to destruction only because of its loyalty to the benevolent Shobijin (which means "little beauties"): a pair of one-foot-tall young women from the radiation-blasted Infant Island, who are exploited by a greedy entrepreneur named Clark Nelson. In his zeal to make money, Nelson abducts the Shobijin and forces them to perform in an exotic nightclub act in Tokyo. However, unknown to him, the Shobijin are using their performances to telepathically summon Mothra to their rescue, and when the big bug eventually does appear, Eiji Tsuburaya and his special effects crew get a chance to more than go to town.

Of course, it wouldn't be a Toho monster movie without spectacular scenes of miniature city destruction, and on this count Mothra definitely delivers, especially during its rampage in larval form. Several different larva puppets of various sizes were constructed, as well as a suit (only of the caterpillar's fore section) worn by actor Haruo Nakajima, which allowed for the use of very large-scale, super-realistic miniatures. Unlike in some later appearances, in this movie, the larva's movements appear very natural and lifelike, and the mottled tan and brown skin texture looks far more realistic than most of the subsequent puppets', which were a more uniform, glossy brown.

The adult "imago" Mothra doesn't fare nearly as well. For scenes of the flying Mothra's assault on Newkirk City, the capital of the fictional nation of Rolisica, the miniatures are smaller and less detailed, resulting in a far less satisfying look. Much like Rodan, Mothra is able to generate typhoon-force winds with its wings, but most of the shots of miniatures whirling around like paper confetti leave much to be desired.

The musical score is provided not by either of Toho's most frequent composers—Akira Ifukube and Masaru Sato—but by Yuji Koseki, who scored relatively few films but provided a distinctive and exotic musical backdrop for Mothra. Koseki wrote the song that the Shobijin use to summon their guardian, but it was later re-orchestrated by Akira Ifukube for use in subsequent films, such as Mothra vs. Godzilla and Ghidrah, the Three-Headed Monster.

Although little good can be said about Sony's packaging job (see comments in the Battle in Outer Space review), the DVD presents generally fine prints of both the U.S. and Japanese versions of the film. During the film's initial release in 1962, Columbia inexplicably trimmed a considerable amount of footage from the film, including some impressive special effects scenes—presumably just to shorten its running time. Unless one has a serious aversion to subtitles, there's not much point in watching the (reasonably well-dubbed) U.S. version except to listen to the insightful commentary by Steve Ryfle and Ed Godziszewski. Despite the poor packaging, this set is a good value for any kaiju eiga fan on this side of the water.
Posted by Stephen Mark Rainey at 12:01 AM