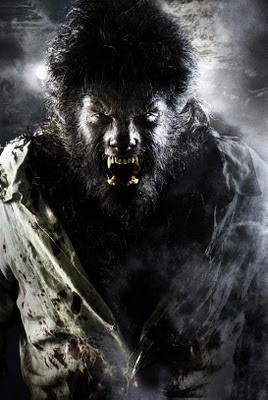 ...but I rather enjoyed the new one, which stars Benicio Del Toro, Anthony Hopkins, and Emily Blunt. It's beautifully photographed, and I liked the performances of all the main characters well enough—though I must say, none were sufficiently sympathetic to give this movie the heart it really needs. The atmospheric setting makes for the greatest part of its allure, most evident in scenes of the grand but dilapidated Talbot manor and the gypsy camp in the woods. Danny Elfman's music sounds like, well, Danny Elfman music, which isn't half bad, if rather generic, and Rick Baker's werewolf make-up is excellent; I appreciated the return to the critter's more man-than-wolf style of the original movie, though some of its more animalistic traits—such as running on all fours at top speed—worked nicely via reasonably decent CGI.

Though the story departs significantly from Curt Siodmak's original, it doesn't offer any real surprises. Now and again, it feels a bit too much like Van Helsing (which, despite its vile reputation, I didn't especially dislike), such as the werewolf's rampage through London and the father-son confrontation at the climax. Anthony Hopkins plays Sir John Talbot with his characteristic style, and though I much prefer Claude Rains's portrayal, Hopkins offers a dark variation on the character that I somewhat admire. Conversely, his cooler relationship with son Lawrence adds yet more distance between the characters and us as viewers. Rains and Chaney brought some authentic warmth to their respective characters; there's precious little of that to be found here, although Emily Blunt plays Gwen Conliffe with enough sensitivity to keep the people palatable, so to speak.

Del Toro is a fine actor, but though his character is hardly despicable as a human being, it's hard to feel much sympathy for his plight. The grueling scene of his torture in the insane asylum serves more to show Dr. Lloyd (Michael Cronin) as a bad man than to inspire any deep feeling for Talbot. His best scenes are his early interactions with Gwen and his first encounter with Inspector Montford (Nicholas Day), when he shows deeper emotion than just fear and anger. The tragic climax of the original film far surpasses the almost too-pat death scene here; however, the clear insinuation that the curse will now be perpetuated via Montford works well. It opens the way for new horrors, but doesn't simply scream "bring on the sequel," even though it might, should the box office numbers add up.

For my taste, there are a few too many sudden jumps at the camera, just to make you come up out of your seat—a poor substitute for true suspense—but at least the pervasive, somber atmosphere goes a ways toward making up for it. The gore scenes are plentiful and generally realistic, so it doesn't all come off as pure cheese.

Despite a ton of reservations about this movie, I still came out of it feeling satisfied, and I suspect it'll end up in my collection when the time comes. Four beers out of six.
Posted by Stephen Mark Rainey at 12:01 AM

Your review echos mine. I saw "The Wolfman" last night and I found it better than what other fan reviewers have said. I gave it a B+ on my blog. - A.