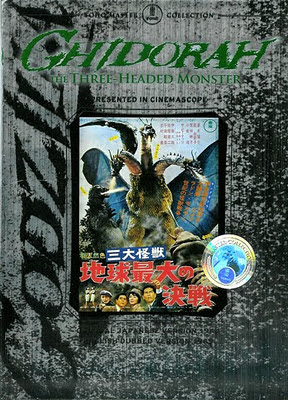 For better or for worse, Ghidorah, the Three-Headed Monster made for the single biggest directional shift in the history of Godzilla films, as in this movie, the biggest, baddest, and meanest monster of them all began his unlikely transformation into a heroic, if not exactly all-around good dude.

Despite some very cool monster scenes and a fairly engaging human story, Ghidorah registers pretty low on my daikaiju-meter. As anyone who's read these reviews knows, in my book, giant monsters ought to be giant monsters; I was never fond of the anthropomorphizing of the critters, which became a trademark of the Godzilla series after Ghidorah. Toho's rationale—more specifically, Eiji Tsuburaya's and screenwriter Shinichi Sekizawa's—about the trend was, well, we've got to appeal to the younger set. Hey, I was the younger set in those days, and every member of the younger set I knew who enjoyed monster movies wanted his beasties big, bad, and impressive. Who knows...maybe for Japanese kids, this was just what oisha-san ordered. But for some of us, it felt like the beginning of the end, monster-wise.

Still and all, Ghidorah was—and is—an entertaining monster romp. In my old age, any Godzilla movie is an enjoyable movie, no matter what form it takes. Even Godzilla vs. Megalon has its charms, and that's saying something; in 1977, I took my little brother with me to the theater to see Godzilla vs. Megalon, and 33 years later, I don't think he's ever forgiven me for it. Some horrific experiences just imprint themselves on the youthful mind, you know? Some of us adapt, while others do not.

On the positive side, in Ghidorah, Godzilla is less the willful messiah than a monster doing what he does best: messing up other critters that transgress on his rightful territory. His first appearance is memorable: Under a peaceful, midnight blue sky, an ocean liner makes its way toward a pod of whales. Then, behind them, a telltale churning of the ocean hints that something monstrous is about to happen. Akira Ifukube's now-familiar score rises along with a dark, beastly shape, and with dorsal fins alight, Godzilla unleashes a stream of fiery death on the ship, which immediately bursts into flame. It's a great scene, one of Godzilla's best ever. And shortly thereafter, he makes landfall in the harbor district of Tokyo, followed by a handful of highly impressive daikaiju-rampage scenes.

Ah, if only the rest of the movie had been made in this mode.

Rodan's appearance from Mount Aso is impressive enough, but of all the monsters, he's the one who most rapidly devolves into class clown. The Rodan suit design is among the worst ever, a far cry from the evil-looking reptilian beast from his origin film. In the commentary that accompanies the U.S. version, author David Kalat makes a reasoned case for why the monster buffoonery could be taken as a good thing, particularly in that the associated financial boon assured a new Godzilla film from Toho every few months. Be that as it may, once the monsters start mixing it up, the movie becomes an oftentimes tedious wrestling match between rubber suits. For the rest of the Showa series, the majestic, fearsome, awe-inspiring moments so prevalent in the earlier films become fewer and farther between. As a kid, this didn't sit well with me, no sir, not at all, and though I love the Godzilla movies these days more than ever, I still can't help but cringe a little when I watch the ridiculous volleyball match between Godzilla and Rodan.

Ghidorah's birth and attack on Tokyo goes a ways toward setting things right, at least for a time. Many of the destruction scenes rate among Eiji Tsuburaya's most spectacular work, and Ghidorah's design really is awesome. He, at least, is played straight, even during the more comical battles.

Then there's the "conversation" between Godzilla, Rodan, and Mothra, as the big caterpillar attempts to convince the other two to join up as a tag team and whomp Ghidorah's twin-tailed ass. Obviously, there are those who find the scene humorous and even endearing. I, as you might surmise, am not one of them.

On this very nicely presented Classic Media DVD, we have both the original Japanese version and the dubbed U.S. version, which is more radically edited than one might expect upon viewing it without the original for comparison. Dramatically, some of the alterations work quite well, while others are completely superfluous. Lots of scenes are shuffled around, particularly those that involve Godzilla and Rodan's initial appearances; the Venusian prophetess (Akiko Wakabayashi) in the U.S. version becomes a Martian prophetess; and—quite inexplicably—much of Akira Ifukube's excellent score has been replaced by unremarkable film library music. However, a few changes are actually beneficial to the film, such as the deletion of a reprise of Mothra's song, which slows the pacing of the Japanese version down to a merciless crawl. And near the end of the film, during the scenes of Detective Shindo (Yosuke Natsuki) rescuing the prophetess/Princess Salno from killer Malness (Hisaya Ito), the sounds of the monster battle are heard in the background—which only makes sense, since they are obviously fighting in close proximity.

Like the rest of the Classic Media DVD Godzilla releases, this one is an absolute must for the avid Godzillaphile—whether you believe that Ghidorah is a classic among classics or the beginning of the devolution of a once-fearsome atomic horror.