The Monsters Are in Revolt... 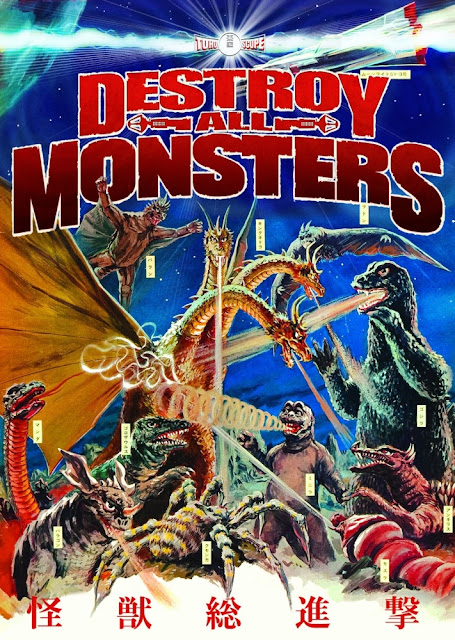 Destroy All Monsters is probably my second favorite Godzilla movie after the original (though it's certainly neck-and-neck with 1964's Mothra vs. Godzilla). It's the last entry in the Showa era Godzilla films made in the inimitable style of Ishiro Honda's most classic daikaiju outings, and is, in fact, Honda's penultimate directorial job of the Godzilla series. The film is literally a gathering of most of Toho's monsters, and they are given plenty of quality screen time. Similarly, the human cast includes many familiar, noteworthy faces, with Akira Kubo, Yoshio Tsuchiya, and Jun Tazaki playing prominent, memorable roles. Akira Ifukube's musical score remains one of his all-time best, reprising several well-known themes, from his traditional Godzilla theme to motifs used for Rodan and King Ghidorah, as well as a distinctive military march, all beautifully arranged and orchestrated.

Destroy All Monsters utilizes the now timeworn premise of space aliens—specifically, the Kilaaks, who come from the asteroid belt between Mars and Jupiter—saying politely to Earth's leaders, "Please hand over your planet, or these monsters will bust your ass." The storyline is similar to Monster Zero, made a couple of years previously, but in most respects, Destroy All Monsters goes about it on a grander scale, with daikaiju showing up all over the world to wreak havoc. However, in Monster Zero, the Xians have some motivation for conquering the earth: the acquisition of natural resources (water, in this case), which is scarce on their world. (In fact, it's rather ironic that the villains in that movie in some ways reflect Japan's expansionist philosophy prior to World War II.) In Destroy All Monsters, there's no insinuation of motive; only that, for the Kilaaks, a little conquest makes for an enjoyable day's work.

The Kilaaks themselves are interesting enough; in their terrestrial form, they appear as beautiful, silver-clad women—or at least holographic projections of beautiful, silver-clad women. In their natural state, they are living minerals, which resemble snails made of glittery stone, and they can only survive in an environment of extreme heat—which begs the question, how do enslaved humans share their living space without being burned to death? Perhaps the bodies of the human slaves we view are actually Kilaaks who have merely taken their forms, but this little point is never addressed in the script. Of course, in a movie such as this, one doesn't expect scientific plausibility, although it's certainly nice when events adhere to at least a modicum of internal logic.

Ah well, in Destroy All Monsters, it's the monsters themselves we paid to see, and in this regard, the movie doesn't disappoint. This is the movie that introduces us to Monster Island, a.k.a. Monsterland on Ogasawara Island, where most of Toho's daikaiju have been collected and confined, for security purposes as well as for scientific investigation. (We'll have to take it on faith that, in actuality, the monsters have been there for a while because, though the movie is set in 1999, films that were made after Destroy All Monsters but ostensibly occur at an earlier date, such as Godzilla vs. Gigan and Godzilla vs. Megalon, also feature Monster Island.) Unlike the Xians in Monster Zero, who showed some restraint and didn't unleash the monsters until we ungrateful Earthlings refused their kind offer of enslavement, the Kilaaks start off on the right foot and send the monsters to the four corners of the earth to do some whooping on miniature cities. Godzilla invades New York! Manda slithers through London! Rodan swats down Moscow! Baragon burrows under Paris!

But wait...that's not actually Baragon. Why...it's Gorosaurus, from King Kong Escapes. This little gaffe is in the original Japanese version as well as the English, and this is because, originally, Baragon was scheduled to destroy Paris, and the dialogue stating this had already been recorded. However, when the scene was filmed, Toho found the Baragon suit beyond repair—largely from multiple uses (in disguise, of course) in the Ultraman TV series. So Gorosaurus was hastily substituted, but that's even Baragon's roar you hear when the Arc de Triomphe crumbles. In general, the monster suits are very good, although King Ghidorah appears a bit more scraggly than he did in Monster Zero. The Godzilla suit is well-proportioned and has a ferocious demeanor—a monstrous improvement over his distinctly frog-like appearance in his previous film, Son of Godzilla.

In late 2011, Media Blasters/Tokyo Shock finally gave this landmark film the respectable release it deserves. For years, the bare-bones ADV edition, featuring only the disastrous Hong Kong English dub, was all that was available domestically. The Tokyo Shock DVD offers the choice of the original Japanese language version, the International (Hong Kong) dub, and the AIP-Titan Studios dub, which is the one most fans on this side of the Pacific will remember from its original U.S. release. Sadly, the AIP soundtrack is not well mastered, with lots of background noise, erratic volume shifts, and other problems that tend to be grating. There are bootlegs of the ADV DVD that feature a high-quality version of the Titan dub, and you'd think Tokyo Shock could have at least done as well. Fortunately, that's the only major down side of this release, and the commentary by Steve Ryfle and Ed Godziszewski is entertaining and spot-on. 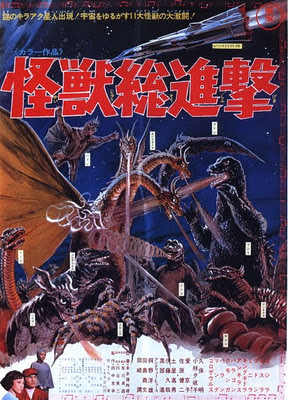 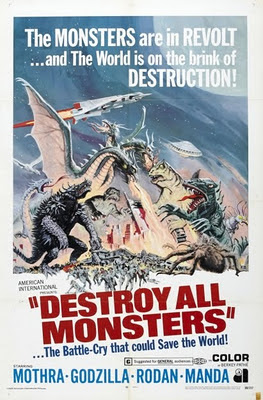