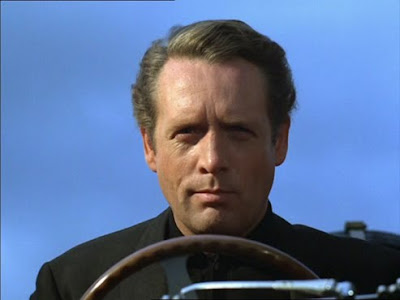 I've been a fan of The Prisoner, the Patrick McGoohan surreal espionage/science-fiction/thriller series, since its original broadcast in the 1960s, but it's been many years since I've given it a look. Thankfully, Netflix and other such services make it fairly easy to view a lot of older shows without having to resort to buying them (which, in the case of The Prisoner, is a blessing since the entire series is not inexpensive), and I've finally gotten around to availing myself to this one again. It's easy to see why the show remains in the public consciousness after so many years; it's relevant, nostalgic, colorful, puzzling, classy, thought-provoking, and outright addictive in ways that few television series can claim. Patrick McGoohan—star, writer, and director—as #6 possesses magnetic charm; he's a dedicated individualist thrust into a world of outward conformity, beneath which lies inscrutable mystery and deadly danger. While the Cold War certainly served as the backdrop for the show in its day, the show's theme of human individuality and self-worth is just as relevant, just as engaging now as it ever was.

I'm about halfway through the series' run and just about impatient to get on with the rest of it. For the moment, though, it's back to the grindstone with "The Demons of Ice Valley," my novella that's currently in the works.

Be seeing you.
Posted by Stephen Mark Rainey at 2:12 PM