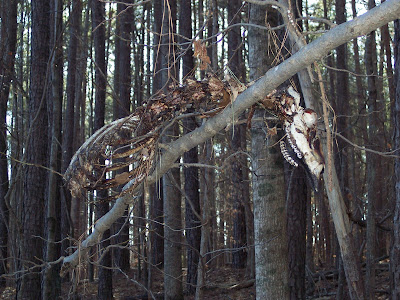 Yes, there is—or was—at least one dreaded Cacheosaurus roaming the woods around the watershed trails just north of Greensboro. The remains pictured above, taken by geocachers "Three Newsomes," apparently reside near one of my caches (Threading the Needle, GC1EQD2), just off on the Reedy Fork Trail. The Newsomes were understandably taken aback, as are most people who find themselves face-to-face with a dreaded Cacheosaurus, whether it's dead or alive. At least they had the presence of mind to take a photo, and they were lucky enough for it not to be the last photo they ever took.

There. That's my public service message for today. Laters.
Posted by Stephen Mark Rainey at 5:47 PM