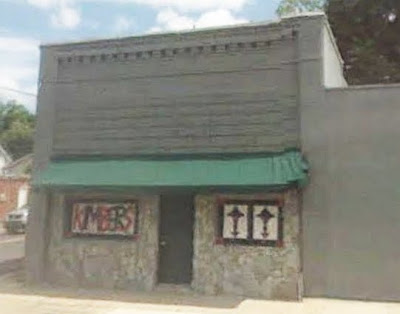 Back before Christmas, I'd been caching around Gibsonville, just east of Greensboro, and gotten hung up in their friggin' Christmas parade, which made me all kinds of ornery ("Everyone Loves a Parade"). I figured I might never forgive Gibsonville because, I mean, really, it was bad. However, last night, my friend Ms. B. and I had reason to be out that way, and I gotta tell you, I'm suddenly feeling far more kindly disposed toward Gibsonville and environs.

The first place I must recommend is The Grove Winery, a small but impressive enterprise out in the sticks of Guilford County, just west of the Alamance County line. Ms. B. and I had picked up a Groupon for a wine tasting at The Grove, which we've been to a few times and enjoyed, and we enjoyed it again, very much. Since we were so close to Gibsonville, we decided to see what kind of dining options it might offer. We chose Kimbers Restaurant, an unassuming little establishment on the corner of Main and Route 61. As it turned out, we discovered a wonderful little place. Kimbers has a fine menu, is reasonably priced, and the manager and staff are quite cordial and prompt. The wine list isn't extensive, but we found a decent California Cabernet Sauvignon, which actually went quite well after an extensive sampling of The Grove's wines; I had chopped bison steak with baked potato, and Ms. B. ordered sauteed shrimp with a sweet potato. The restaurant was almost full at 6:30 p.m., and most folks were very casual, though the atmosphere was a bit more toward the fine-dining side.

I must admit, Gibsonville has at least a few hidden treasures—and some of them are not geocaches. Of course, it has those, too.
Posted by Stephen Mark Rainey at 5:08 PM