Having recently paid a visit to Ferrum College, my old alma mater (at least for my Associate of the Arts Degree), today on a whim, I paid a visit to Ferrum's website to look up some current info on the school. While I was browsing, I discovered a link to The Chrysalis, the college's literary magazine. Much to my surprise, the site features an online archive of past issues going back to the dark ages — even as far back as my interment in the late 1970s. The 1979 issue features my story, "Into the Andeleas," which, in its way, helped set me on this questionable course as a writer of fictions. It went like this:

From 1978 to 1979, I masqueraded as a studious sophomore, and at some point in the latter months of the former year, I came upon a flyer advertising The Chrysalis's annual literary contest, which offered a cash prize of $25 (not shabby for an all-but-destitute college student) as well as publication in the magazine. One had but to write a short story; submit it to the magazine's staff, which would evaluate the tale; and win the contest to claim the cash and revel in the fame that comes with publication in a college lit mag.

In those days, I was pursuing a degree in fine art (which I eventually earned), but I did have a strong predilection for writing (if not necessarily good writing). So one evening while I and several friends were partaking in substances best not described, I declared I was going to win this literary contest. Mind you, I had supportive friends, who on this night drank heartily to my success; in retrospect, I rather wish there been some wagering on said proposition, that I might have increased my potential take-home rewards. Alas, not. Suffice it to say, I spent a couple of evenings working on a story. I submitted it to the literary magazine and won the contest.

And so, in Spring 1979, "Into the Andeleas" appeared in that year's issue of The Chrysalis, and at an award ceremony just prior to the Class of 1979's graduation, I received a check for $25, dutifully lobbed at me by my favorite English professor and unknowing mentor, Dr. Daniel Gribbin. Upon reading the tale, one can rightly infer I was an avid reader of sword & sorcery fiction back in the day. While the story may have been a pale imitation, I can at least say that it was sincere. Kind of like Linus's pumpkin patch.

The illo pictured above was by one Joe Sheridan, one of those supportive friends who drank to my success. In those day, Joe was more commonly known as "Radical" because, well, Joe was radical. Who knows, maybe he still is. I do recall I regarded him as an awesome fellow. 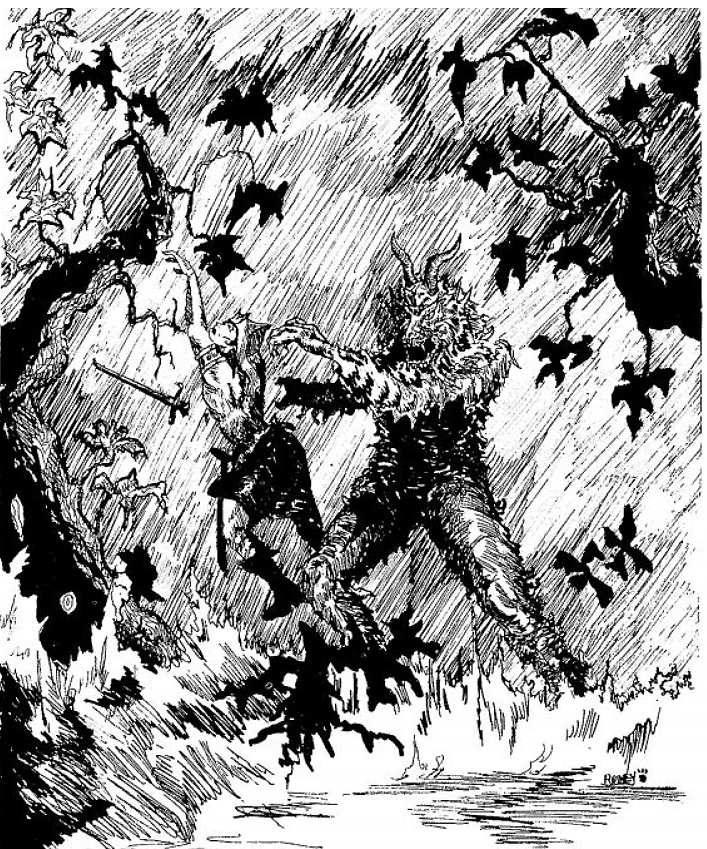 Somewhere deep in the vault, I still have a copy of that issue of The Chrysalis, but I cannot begin to calculate how long it has been since I have so much as seen it, much less opened it. I had completely forgotten, until discovering it today, that I had also contributed a pen & ink illustration to accompany the tale. As with so much of my creative output from the day, the drawing had potential, but I do rather rue the fact that, in so many instances, I tended to rush things in favor of procuring my next bag of weed, and it showed. Still, the critter pictured in the — unfortunately — rather poor reproduction of the art is the precursor to the Fugue Devil, which sprang from a night horror I experienced in my early teens. The novelette, "The Fugue Devil," at least, captured what I felt needed to be captured from that experience. It is currently available in the Dark Regions Press edition of Other Gods.

Still, that a number of impartial readers saw fit to honor this tale with a cash prize, not to mention publishing it in the magazine, to this day fills me with even measures of gratitude and resentment, since, truly, had I not won this contest, I probably would not have set forth on this rollercoaster life as a writer of fictions, which has brought no end of satisfaction, frustration, pure joy, and something like despair.

I've often wished I had been better at numbers.

Anyhoo, should any of you devoted readers care to have a look at the verbiage that constitutes one of this writers' earliest paid publications, go forth to the 1979 Edition of The Chrysalis and flip to page 23. I suspect you will survive, if not altogether unscathed.
Posted by Stephen Mark Rainey at 6:07 PM