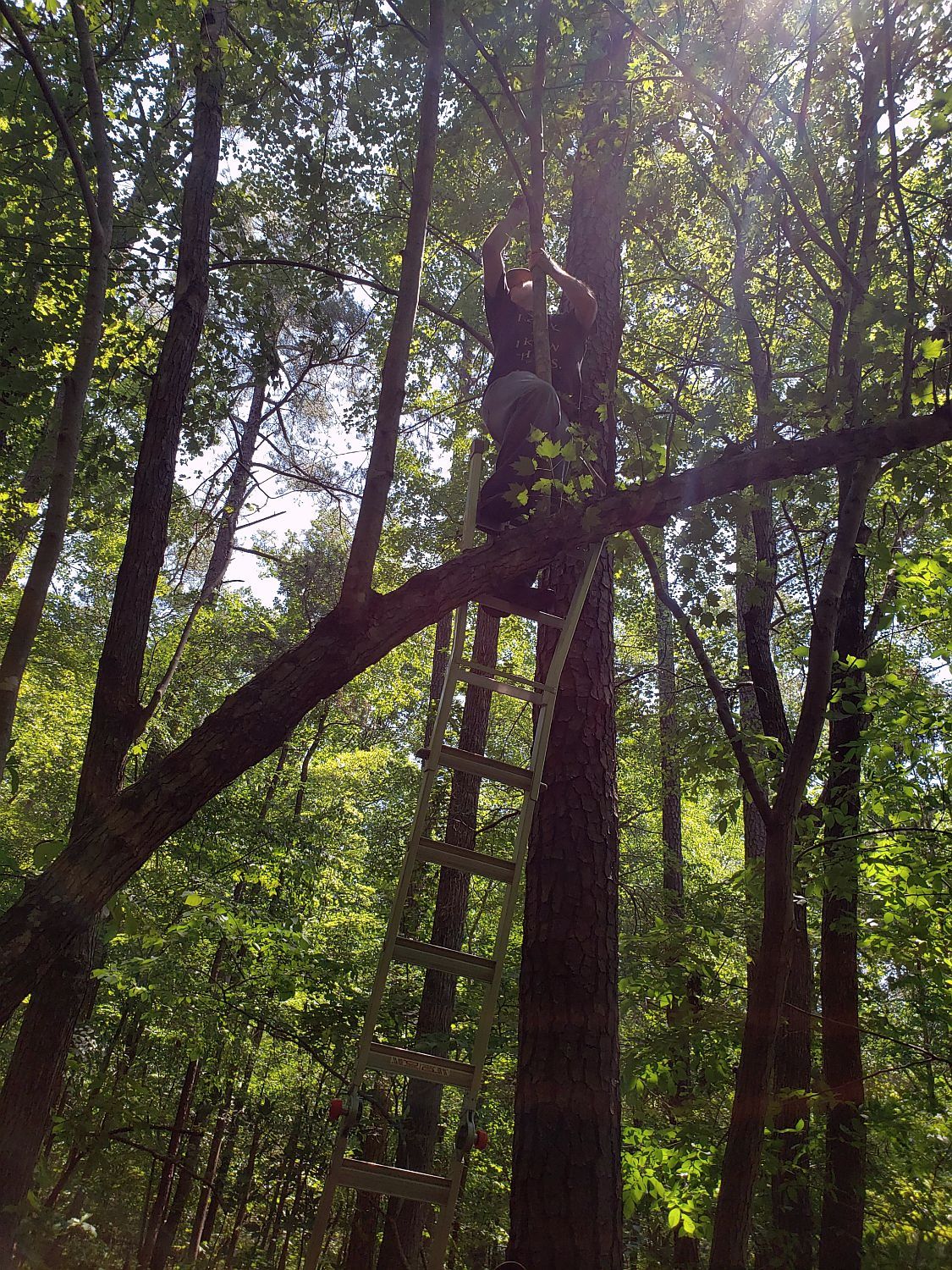 You might be a geocacher if you spend your Sunday morning getting high. In this case, quite literally.

The usual suspects — Diefenbaker (a.k.a. Scott); Fishdownthestair (a.k.a. Natalie); Robgso (a.k.a. Old Rob, a.k.a. Boody Rob, a.k.a. Old Bloody One-Eyed Rob, a.k.a. Rob); Rtmlee (a.k.a. Yoda Rob, a.k.a Robbin); and Old Rodan (a.k.a. me) — converged on Cary, NC, this morning, once again under the team moniker "No Dead Weight." Tradition has it that when Yoda Rob is along, we go by "Team Dead Weight," but we decided not to have any of that stuff this trip because we knew we weren't going to have any of that stuff this trip.

And so we didn't. We started our day at a challenging, puzzle/multi-cache titled "And So It Begins" (GC410G9), which involves four stages, with the container for each stage placed at a higher elevation. We found the first one about head high. The second one would have been well above our heads, except the tree in which it resided had fallen over. Thus, it lay barely above the ground (I hope the cache owner will decide to come out and re-hide it at a more appropriate elevation). The third stage... well... it was a fair height above our heads, so Diefenbaker very kindly offered his services as a stepping stool (and a sturdy one too!) so I could climb for the cache. We knew the final stage would likely require a somewhat more specialized tool of the trade than Diefenbaker, and it just so happened that he had brought one. It required lugging the heavy tool some distance into the woods, but in the end, it paid off in spades.

The cache hangs about 25 feet up in an arched tree (see photo). Theoretically, one could ascend up the arch, although it's surely difficult, as there isn't a limb on it for a while. There are a few knobs one might use as foot- and handholds, and quite a few finders have actually done this. But since I didn't want the very old gentlemen (and that very young woman) to feel they had wasted their time and energy lugging that big old ladder through the woods, I reluctantly agreed* to use it to make my ascent.

Once I hauled myself up there, signed the log, and came back down to earth, the rest of the team took turns going up and down just for good measure. The fun soon came to an end, though, and so we hauled the ladder back up to the vehicle and continued on our way to several other caches in the area. We finished the day with the relatively small total of eight finds (and three DNFs [Did Not Find]), but the quantity mattered less than the quality of the hides, the excitement of the hunt, and the great time with a bunch of great friends.

For afternoon vittles, we headed over to The Big Easy Oven & Tap, which we had visited on a recent trip to Cary (the one where we lost Old Rob in a parking garage; see "Where's Rob?" May 19, 2019). Gator bites, fried oysters, beef brisket nachos, Pernicious Wicked Weed Ales, and other goodies helped revive a bunch of exhausted old farts (and one very young woman).

So it's been a satisfying weekend, what with chowing down on gators, scorpions, crickets, and dragon burgers, as well as drinking wine, ascending to great heights, taking care of necessary business, and taking another step in the walk of the unknown. Until next time, I'm your host, Damned Rodan, saying —
*This is horseshit. I needed that ladder real bad.
Posted by Stephen Mark Rainey at 10:27 PM