Extreme Way to 52 and Others 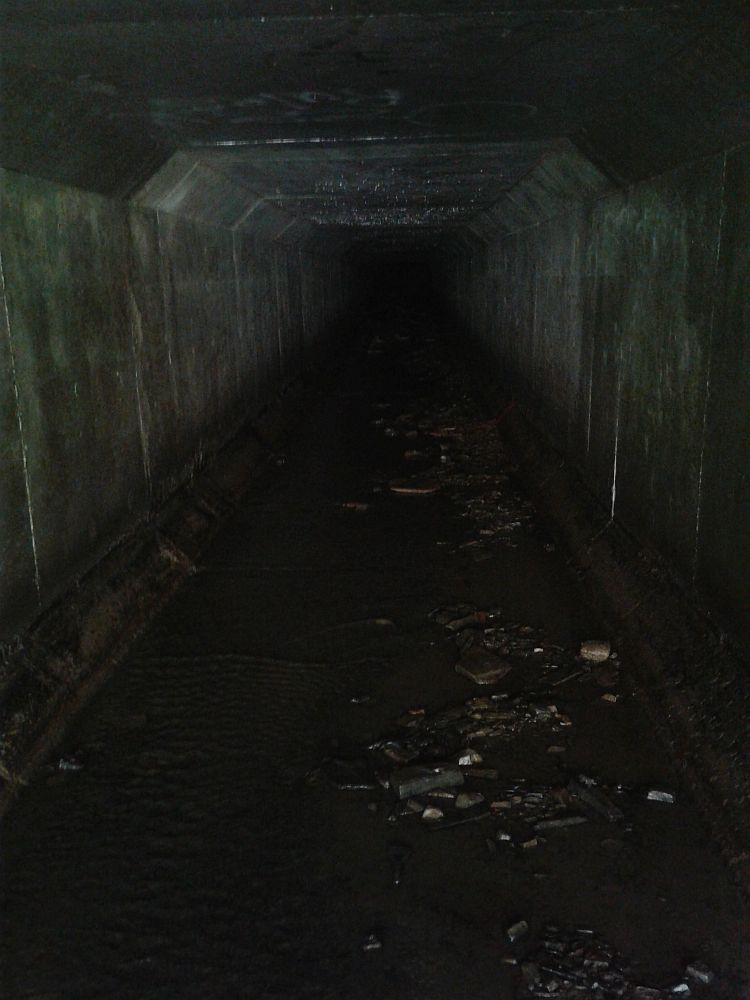 Another Sunday, another day of fairly extreme geocaching with Team No Dead Weight — today's personnel consisting of Diefenbaker (a.k.a. Scott), Fishdownthestair (a.k.a. Natalie), Tbbiker (a.k.a. Todd), and Old Rodan (a.k.a. Me). Not contented with last weekend's mostly aerial acobatics (see "Sunday Morning High," June 16, 2019), Todd invited us to join him today in the Jefferson National Forest in Virginia to hunt a few physically challenging caches. Our primary target was "Extreme Way to 52" (GC12ZVQ) a cache dating back to 2007. It's still in place, although the cache owner has apparently not been active for some time. It's been quite a while — a couple of years  — since anyone has logged it, so we didn't have any idea whether it would be in decent condition. (Ironically, we discovered that another group was out there today, but they failed to make the find.)

We anticipated a roughly two-hour drive from Greensboro. However, on our way to our target, an accident on US 52, apparently severe enough to close the entire northbound lane, caused an extensive back-up just this side of Pilot Mountain. We ended up having to detour, but rather than follow the endless line of cars moving at slug speed eastward, we opted to go west, take a couple of deserted back roads, and get back on 52 farther north. This route took us past an interesting-looking cache (TOM-TOM, GC5EW6F) at a bridge over Tom-Tom Creek. When we arrived at ground zero, a relatively brief search turned up the cache, but what really caught our interest was literally hundreds of clearly new cigarette packs rushing past us in the river. On and on they came, and after a few moments, it struck me that the mostly likely explanation was that they almost certainly came from a cigarette truck that had been in an accident — indeed, the very accident that forced us to detour, quite a few miles east of us. Once back home, a perusal of the local news proved that our supposition was correct: "Multi-Vehicle Crash Closes Part of US 52 for Several Hours"
Thanks to the detour, we ended up a little late meeting Tbbiker, so we immediately set out on our quest for our primary target. It took almost no time to locate the entrance to the Underworld as described on the cache page. We had all come prepared for the subterranean trek, so we switched on our flashlights and made our way into the Stygian darkness. Since it goes under I-77 and comes out on the other side, we had anticipated a relatively short underground excursion. As it turns out, the tunnel bends and follows the length of the interstate for some distance rather than going straight across. Happily, the tunnel was mostly large enough to walk upright — only a short section of the passage a couple of hundred feet in was low enough to gong Old Rodan right in the head. On and on we went, and after some 900 feet or so, we saw dim light ahead in the distance. 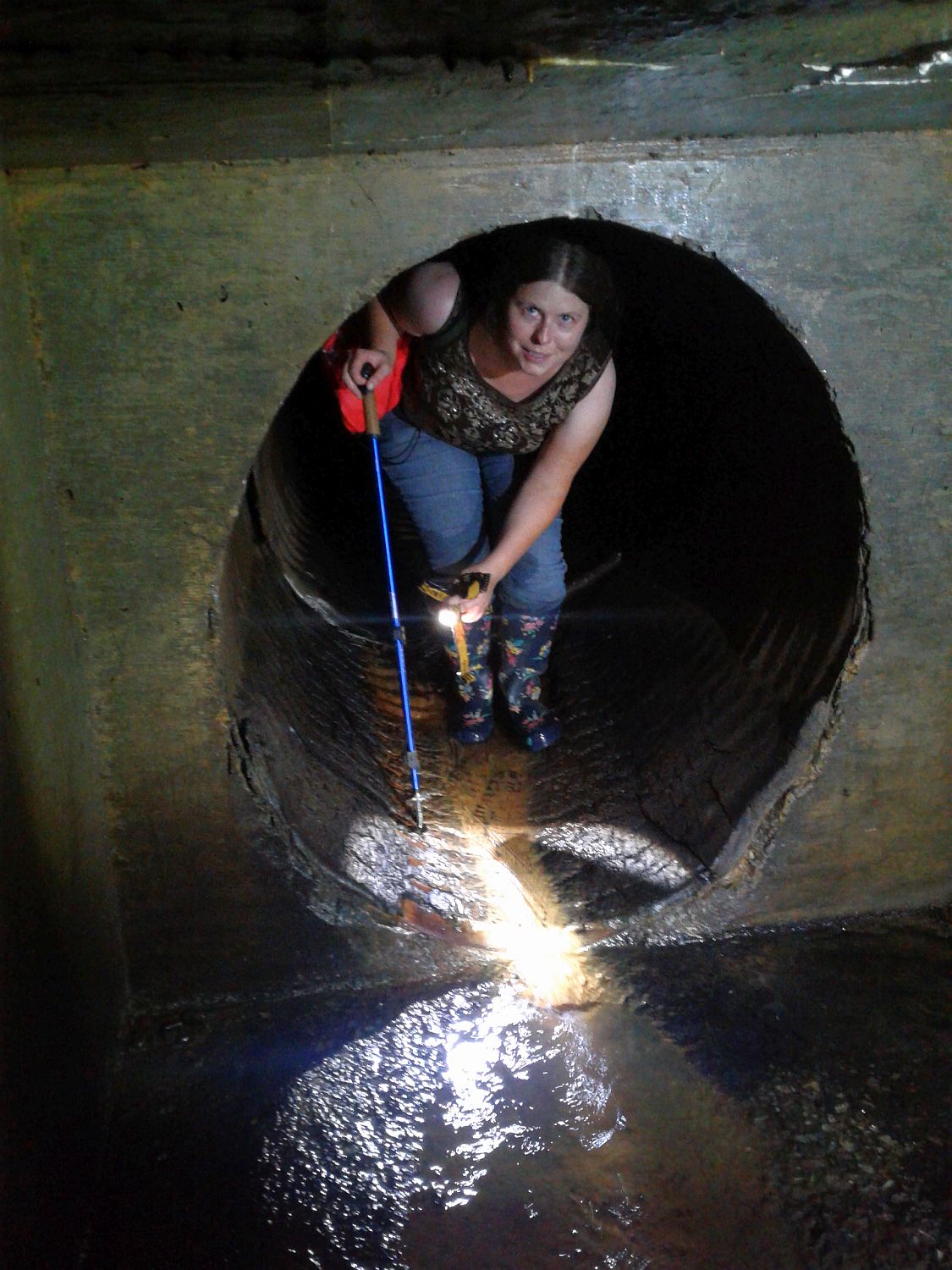 We booked it to our exit, but here, there was a ten-foot incline of about 45 degrees, with water pouring down it. The concrete looked slippery. We tested it. It was slippery. But our boots had just enough traction for us to monkey-crawl up the incline and out to dry land. Now we faced a daunting, prodigious mountainside leading to the roadbed of Old US 52, several hundred feet above us (which is the basis for cache's name). Shades of Bald Mountain (see "Temple of Doom," June 9, 2019), a couple of weeks ago! A couple of us struggled more or less directly up the incline, while a couple of us sought and found less rigorous alternatives. Eventually, we all met on the roadbed, some of us aching and spent, some of us laughing at those of us who were aching and spent. We marched on for a while, and soon enough, Diefenbaker spied our quarry: a nice big ammo can... way the hell up on top of a steep, rocky cliff. Happily, we found a fine enough way to achieve that altitude, and — at last — we settled ourselves, took a breather, and scribbled our monikers in the 12-year-old, almost pristine logbook.

Of course, now we had to turn around and retrace our route back to the beginning. Returning to the tunnel was far easier, now we had a better frame of reference for the location. Along the way, we discovered the remains of an old car in the woods, which Diefenbaker attempted, unsuccessfully, to drive back to the tunnel. Once back at the entrance, Diefenbaker and I opted to negotiate the treacherous slope back into the tunnel, while Tbbiker and Ms. FDTS opted to utilize a much smaller, tighter pipe that connected with the main one. I'm sure we all had fun, though I think Diefenbaker and I had more.

Back at our vehicles, some of us got out of our wet clothing while others of us remained a little drippy (I might have left a puddle). From there, we headed down toward the Appalachian Trail and a cache called "Low Water Trail" (GCBDE1). This one proved far less challenging overall, and the journey took us through numerous tunnels of mountain laurel, through streams, and over little waterfalls. At GZ, we found ourselves once again staring up a massive incline, and the cache turned out to be a hundred feet or more straight up. Lord have mercy! By now, we're needed more and longer rest breaks, not to mention some extra water, but... so far... we old people are all still holding up.

Our egress called for us to pass a cache called "Acrophobia at 3,000 Feet" (GC1BF11), which, as you might guess, requires achieving a certain elevation in order to find the cache. Happily, while the point where the cache is located is at an elevation of 3,000 feet, we start out after it from an altitude of about 2,950 feet. Relatively easy to get to, far more difficult to find. This one took us a little while, even though it turns out its hiding place and method really weren't much beyond the obvious. The cache was enjoyable, but our views of the highway, valleys, and mountains from this altitude were staggering. From the trail, if you go a few feet to the south, you fall about 30 feet. If you go a few feet to the north, you fall over 100 feet. We took great care not to fall. Tbbiker took a photo of me standing perhaps a little too close to the higher edge, but since you can't see my feet in the pic, you don't quite get the full effect. Oh, well... it was exhilarating.
We ended the outing proper with a couple of more easy-to-find caches, and then an early dinner at Sagebrush Steak House in Wytheville. It was acceptable.

I know not what geocaching plans may be hatched between now and next weekend, but let us hope it is something we can all get a charge from. Maybe some kind of electrical gadget cache. Join us again next time for another step in the walk of the unknown. Until then, I'm your host, Damned Rodan, saying —

You guys are the MASTER CACHERS!!! You leave the rest of us in the dust. Bravo! (And I hope you kept the car?)