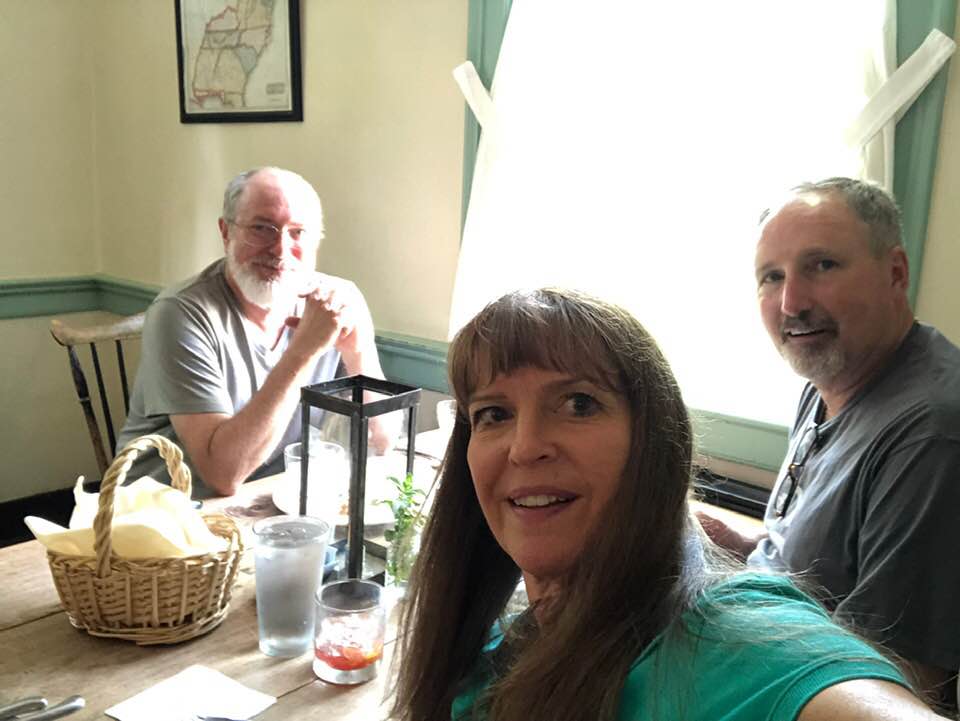 Friend Suntigres (a.k.a. Bridget) has gone through a rough patch these past few weeks, having been hospitalized with lung problems. Happily, she is breathing again — mostly — so this morning, she, husband BigG7777 (a.k.a. Gerry), and Old Rodan (a.k.a. moi) packed up some portable oxygen and headed into the wicked wild lands south of Winston-Salem to hunt a few caches with relatively easy terrain ratings. I had anticipated going after a small number — like, five or six — but the lady insisted on keeping up the momentum, so we ended up with considerably more: an even dozen for me, and fifteen for my companions, since we stopped for a few I had claimed in days past.

Highlights included a novel little cache at a picnic shelter behind a church. I swear I had already searched the spot where Suntigres located the container. Another was a cache hidden beneath a highway bridge, which required considerable searching down in Troll Land. The cache might or might not be in the condition it was intended, as it looked like there might have been more to it at one time, but find it and sign the log we did.

For dessert, we sought lunch at The Tavern in Old Salem, an authentic 19th-century-establishment that features locally farmed food; an extensive wine, beer, and cocktail list; costumed servers; and dinners by candlelight. (We had to forgo the candlelight, since it was, like, daylight.) The fare here more than hit the spot. For me, fried chicken livers with smashed potatoes and green beans, accomanied by a delicious bloody mary (x2). For the other folks, chicken pie with gravy, also with smashed potatoes and green beans. Gerry had a pleasant Riesling, while Ms. Bridget went with a Maple Old Fashioned, which I sampled —most delicious. I'm thinking that Ms. B. and I should have an evening meal at the Tavern, as it strikes me as agreeably intimate as well as rustic. The only downside about visiting Old Salem is that I have found all the caches there. Someone needs to get on the ball and place some new ones. Seriously, people.

And so it was. Till our next!