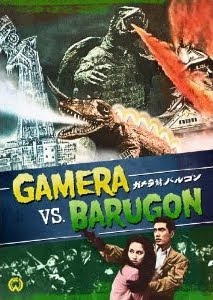 The Shout! Factory releases of the Gamera series are easily among the best—if not the best—of any daikaiju films in the United States. They're reasonably priced, present beautiful, widescreen prints of the original Japanese versions of the movies, and offer several extras—including booklets in the package with additional info on the films, in this case a retrospective of his involvement with Gamera vs. Barugon by star Kojiro Hongo. Furthermore, the upcoming Gamera releases are double features—Gamera vs. Gyaos/Gamera vs. Viras and Gamera vs. Guiron/Gamera vs. Jiger. This release of Gamera vs. Barugon also offers an insightful commentary by August Ragone and Jason Varney.

Originally presented as a television release, titled War of the Monsters, by AIP-TV in 1967, Gamera vs. Barugon is arguably the best of the Showa-era (1965-1970) Gamera films. With a far more mature plot than the rest of the series, superior special effects, and a fine musical score by Chuji Kinoshita, the movie offers a lot more for daikaiju fans than fodder for MST3K, which certainly can't be said of most of the Gamera series.

The film opens with a flashback to the original Gamera and his voyage into space via Plan Z. But as the story proper begins, the rocket crashes into a meteor, and Gamera returns to Earth, initially attacking Kurobe Dam in Japan to satiate his craving for energy. Next, we meet a rather shady group of adventurers, who are plotting an expedition to New Guinea, to recover a giant opal that their leader, Ichiro Hirata (Akira Natsuki), found during World War II and hid in a cave. Three of them—Hirata's younger brother Keisuke (Kojiro Hongo), Kawajiri (Yuzo Hayakawa), and Onodera (Kôji Fujiyama)—make the journey, landing in a small village of natives, where they also meet a Japanese doctor named Matushita (Ichiro Sugai) and his assistant, Karen (Kyoko Enami), who implore them to stay away from the cave. Ignoring the warnings, the three find the cave as well as the opal they seek. However, a scorpion kills Kawajiri, and Onodera attempts to kill Keisuke by blowing up the cave. However, Keisuke escapes with his life and is brought to the village, where Karen nurses him back to health. Here, he learns that the opal is not a gem but the egg of the monster Barugon, which will bring great tribulation to Japan.

Keisuke and Karen travel to Japan to find Onodera, who has arrived in Kobe. However, the egg hatches, and the monster Barugon begins a rampage through the city. Its tongue emits a subzero vapor that freezes anything it touches, and it can unleash a lethal "rainbow ray" from its back that disintegrates matter. Gamera, attracted by Barugon's ray, attacks the monster, but Barugon is able to freeze Gamera solid. Karen tells the military that Barugon, being a land monster, is vulnerable to water and can be lured into Lake Biwa using a huge diamond, which will attract it. The effort is almost successful, but Onodera, infuriated by the loss of the "opal," steals the diamond—only to be killed by Barugon as he tries to escape.

Now, the military endeavors to turn Barugon's rainbow ray back on it via a giant parabolic mirror, but the effort only wounds the creature. However, Gamera has now thawed out and once again attacks the monster, finally dragging it into Lake Biwa, destroying it. The big turtle flies away to await a role in his next adventure, and Keisuke ponders how to make amends for his part in so much death and destruction.

Although ostensibly the star of the film, Gamera is actually a secondary character, spending most of the movie in frozen hibernation. The greater part of the plot is about the massive undertaking to defeat Barugon, which, sadly for the Japanese, just isn't in the cards. In the end, it is up to Gamera to reappear and drag Barugon into the water. Gamera's long absence isn't much of a failing, however; much of Barugon's rampage is visually exciting, the attempts to counter him rather novel. Unfortunately, Barugon itself is not that impressive-looking a creature. While its design is suitably lizard-like, the man-in-suit technique by nature is not conducive to rendering a creature that walks on all fours. At least on occasion, the cinematography overcomes the problem by showing the monster behind rows of buildings or from angles that de-emphasize the body of the actor inside the suit.

Unlike the rest of the Showa Gamera series, including the original 1965 film, little kids play no part in the story, which is really how it ought to be anyway. The protagonist is among the most flawed in daikaiju movie history, and his part in the awry scheme to retrieve his brother's opal results in his suffering visible, almost unbearable guilt. Onodera, as a calculating, greedy, and thoroughly cold-hearted bastard, is a far darker character than most of the cartoon-like antagonists from the majority of that era's daikaiju films. Alas, despite my personal preference for it, the film's serious tone didn't go over quite so well with Japanese audiences—so many of whom were youngsters back in the day—and thus the subsequent Gamera films became more and more juvenile, deservedly earning the ridicule they so often received from western audiences.

I can't say enough good about the Shout! Factory DVD of Gamera vs. Barugon. It's a real treat, and showcases one of the most deserving giant monster movies of the 1960s. Go grab it. Go on. 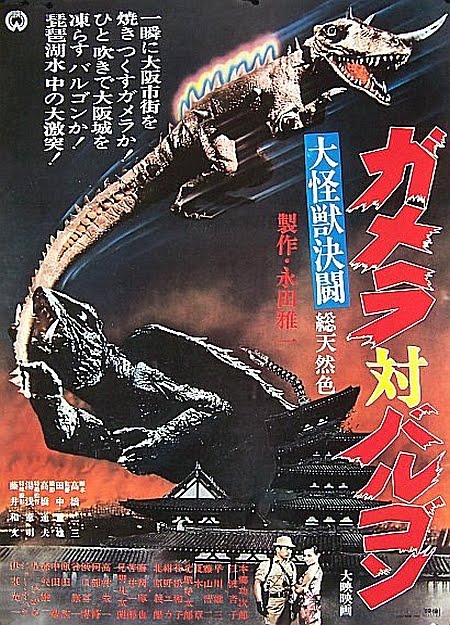 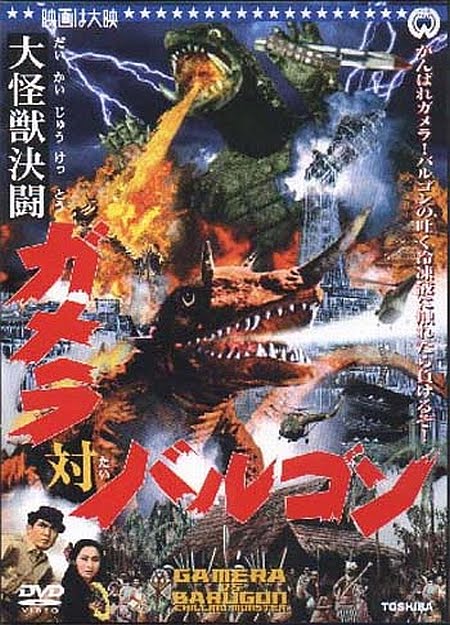