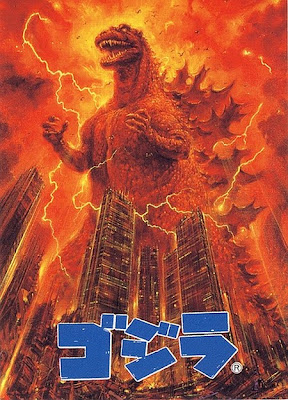 DVD release: none currently; available on VHS only (OOP)

So far, I've reviewed only daikaiju films that are available domestically on DVD; however, there are a couple in the Godzilla series that, due to complicated licensing situations, have never been released in the U.S. on DVD. Godzilla 1985 (a.k.a. Godzilla and Return of Godzilla) is the most significant of them, in that it launched the Heisei Godzilla series (the films from 1984 to 1995) and was a direct sequel to the original Godzilla (1954), ignoring all the prior films and creating an entirely new continuity. It's ironic that even the American version is not available on DVD since, during the mid-to-late 1980s, it was so ubiquitous on VHS (and even Pioneer laser disc) that you never thought you'd see the end of thing. But now, as far as I know, no one, including Toho, has any plans for a U.S. DVD release. Still, bootlegs of both releases are not uncommon, and though it's out of print, VHS copies of the U.S. version may still be found.

After the near-collapse of the Japanese film industry in the 1970s, occasional rumors of a new Godzilla film would surface, but it wasn't until 1984 that Toho produced the first new Godzilla film in almost a decade. Originally titled simply Godzilla (though subsequently most often known as Return of Godzilla), the film was made with a budget far larger than any of the previous entries in the series, and featured a much-hyped twenty-foot-tall animatronic Godzilla—if only in a handful of scenes. For the better part of the film, Godzilla was still played by a man in a suit—Kenpachiro Satsuma, who had played Hedorah and Gigan in the Showa series—which was a very good thing because the "cybot" Godzilla appeared artificial and moved very awkwardly. For the special effects, Toho relied on the talents of Teruyoshi Nakano, who had been an assistant special effects director under Eiji Tsuburaya and chief special effects director from Godzilla vs. Hedorah to the end of the Showa series.

The story is simple enough: a volcanic eruption gives rise to a new Godzilla (though the American version insinuates that it might be the original, since "no body was ever found"), who sinks a few ships and a submarine. This monster is bigger than the original—eighty meters, rather than fifty—and has a distinct taste for nuclear reactors, for it homes in on Japan to attack them and consume the radioactivity. As Godzilla makes landfall and begins to trash Tokyo, a scientist named Hayashida (Yosuke Natsuki, who starred in Ghidrah, the Three-Headed Monster and Dagora, the Space Monster) observes that Godzilla responds to the calls of birds. Therefore, he devises a contraption that, via sonic waves, lures Godzilla to Mt. Mihara on Oshima Island (the same place where Gamera succumbed to Plan Z in Daiei's Gamera in 1965), where the monster topples into the volcano, which by the use of explosives has been made to erupt.

Unlike the later movies of the Showa era, Return of Godzilla is played straight, made much in the style of the ubiquitous disaster movies of the period—which really was a wise move. Admittedly, the film tends to plod quite a bit in the middle, with a significant amount of debate about whether Japan should allow nuclear weapons to be used against Godzilla. Japan does not, at least willingly, but an accident renders the argument moot. Well, it's an accident in the Japanese version; in the American re-edit, the Russians are shown to launch a nuclear missile on Tokyo on purpose, which in effect makes them no less the villains than Godzilla.

As a matter of fact, the American version, released by New World Pictures in 1985, under the title Godzilla 1985, contains more alterations than just about any other Godzilla movie since the original. In an interesting move, Raymond Burr, as reporter Steven Martin, reprises his original role, and while he plays his relatively few scenes completely straight, the rest of the American cast members are nothing more than buffoons, and do more than their share to reduce to U.S. version to pure camp. In addition, numerous scenes are rearranged or abridged, few for any discernible reason, and Reijiro Koroku's musical score suffers from merciless editing and rearranging. Regardless, Godzilla 1985 does offer a handful of improvements in the pacing department, and a few of the edits tighten a scene or two that in the original seemed clumsy, most notably during the appearance of the giant "sea louse," which precedes Godzilla's appearance.

It really is a shame that Return of Godzilla/Godzilla 1985 has yet to see a legitimate DVD release on this side of the Pacific. Despite its many problems, in some ways it's a respectable follow-up to the original Godzilla, and is generally entertaining in its own right. 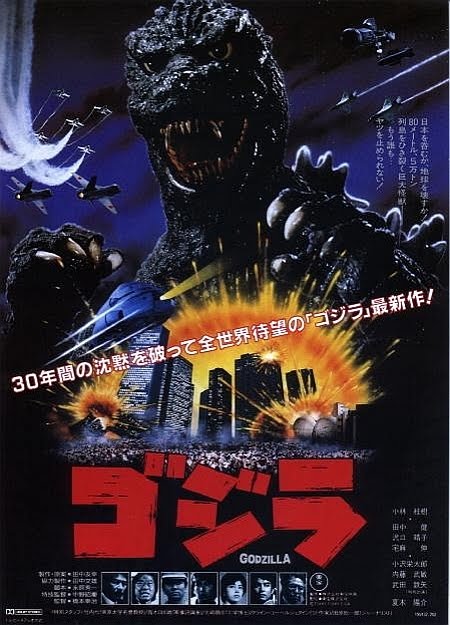 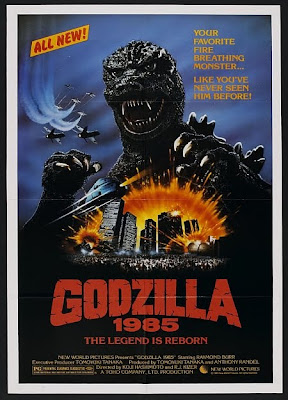