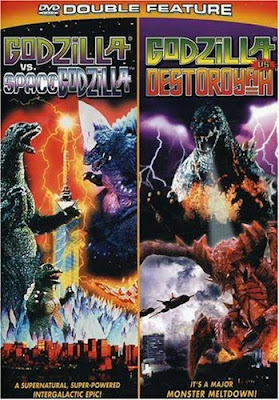 I've always gotten a chuckle out of the name "Destroyah," since it's simply a too-literal translation of the Japanese Katakana characters that represent the English word "Destroyer." Toho tends to trademark its monster names using whatever odd spellings its resident linguists come up with, so "Destroyah" actually is Toho's official name for Godzilla's ultimate foe of the Heisei series. But because I find it all a silly thing, you will never see me refer to the monster as anything but "Destroyer"—which is, after all, what the damn name means. (Similarly, you will never see me use the spelling "Anguirus" for Godzilla's first foe and later ally; I'll accept Angilas or even Angurus, which are both valid pronunciations of the Katakana characters, but official or no, that "gui" syllable simply doesn't exist in the original name. Call me stubborn. If we relied on Toho for official spellings, we'd be flying "Japan Air Lens" across the water.)

But Angilas isn't in this movie, so enough of that. Godzilla vs. Destroyer is the Heisei Godzilla's swan song, and Toho went a few extra miles to make the movie visually and dramatically superior to its previous offerings. Some of those efforts paid off; some of them didn't. On the good side, we have Godzilla Junior, no longer a bouncy, cute little thing but a full-fledged Gojirasaurus that very much resembles its larger and fiercer dad. We have a cameo by Momoko Kochi, reprising her role as Emiko Yamane from the original Godzilla, as well as a couple of younger members of the Yamane family who show a firm grasp of their family history and its relationship to Godzilla itself. Akira Ifukube contributes one of his all-time best scores, ranging from the most powerful to the most reflective. On the bad side, we have...Destroyer.

Destroyer is the result of a compound called micro-oxygen, which has destructive properties similar to the oxygen destroyer invented by Dr. Serizawa in the original film. A mutated prehistoric organism, Destroyer undergoes several metamorphoses, growing larger with each successive stage. In addition, similar to Hedorah, the Smog Monster, lots of little Destroyers can combine to form a single giant creature. Unfortunately, in its final stage, the creature is so big and ungainly that it appears more ludicrous than impressive. When a horde of small Destroyers make a massive assault on Tokyo, the insect-like creatures are no more animated than a bunch of Bandai toys, ruining what might have otherwise been a memorable scene. (In 1996, Daiei put Toho to shame with a similar sequence in Gamera vs. Legion, and Toho finally redeemed itself with the impressive "swarm" scene in 2000's Godzilla vs. Megaguirus.)

The whole point of Godzilla vs. Destroyer, though, was to bring audiences to view Godzilla's actual death. In the opening scene, an enraged Godzilla appears in Hong Kong, its body glowing a fiery red, its nuclear-powered ray more destructive than ever. We learn that Godzilla's atomic heart is overloaded with radioactivity and is on the verge of a meltdown—so devastating that it has the potential to destroy all of Japan, if not the entire world. Every scientific effort is made to cool Godzilla's overheating internal furnace, but all they succeed in doing is buying some time while it is engaged in battle with Destroyer. Godzilla Junior joins in the battle, but Destroyer mortally wounds the young one. At last, Godzilla's super-powerful heat rays and the military's supercooled freeze beams combine to eliminate Destroyer once and for all. But now, the meltdown begins, and Godzilla's body withers away to nothing but ash. An immense cloud of radioactivity spreads over Tokyo, turning it into a ghost city. But then the radiation levels suddenly begin to drop—absorbed by the revived Godzilla Junior, whose body transforms into a new, mature Godzilla.

Whatever its failings, Destroyer succeeds in conveying a sense of hopelessness as it builds to its climax. Nothing humankind does can stop the inevitable course of unnatural nature as Godzilla begins its meltdown. As the monster's body begins to dissolve, Akira Ifukube's emotionally charged requiem heralds the end of something significant—to put it in the words of the final narration of Rodan, the Flying Monster, "as if something human were dying." Though there's no articulation of the actual human toll resulting from the massive spread of radioactivity, the final scene of the devastated, mist-shrouded cityscape paints an eerie portrait of ultimate lifelessness. Then...as the radiation levels drop, the camera advances through the mist, where something in the distance appears to be moving. Finally, the camera zooms in on the new Godzilla, leaving no doubt that, despite the demise of one, the legacy will continue.

Destroyer did signal the end of the Heisei series, which had become rather tired, its plots and characters showing little imagination on the part of the creators. When the "Millennium" films rejuvenated the series, beginning with Godzilla 2000 nearly five years later, a whole new style and rewriting of Godzilla history would be their hallmark. At least the final Heisei film showed respect for the property and offered closure to the continuity that began with Return of Godzilla (Godzilla 1985). It's a film fraught with problems, but these are largely outweighed by its positive aspects, so in the end, Godzilla vs. Destroyer makes a respectable closing for an important chapter in the history of the cinema's most powerful monster. 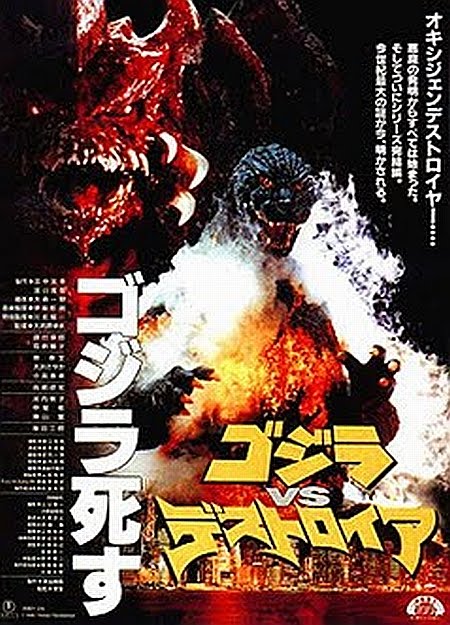 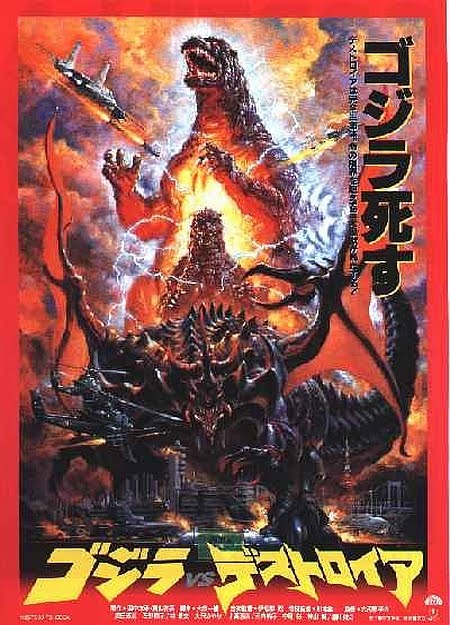 Posted by Stephen Mark Rainey at 7:48 AM