Those Black Hole Guys Are At It Again 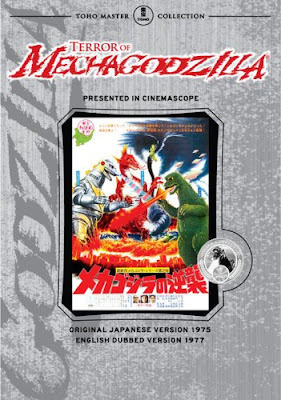 After a string of juvenile, budget-strapped Godzilla movies in the early 1970s, the big G's 15th film was touted as a "return to greatness," with veteran director Ishiro Honda at the helm and maestro Akira Ifukube providing the score. Without question, the film has more going for it than several of Godzilla's previous outings, but as for a "return to greatness," well...it just kind of ain't. It is, overall, an entertaining if still highly juvenile monster romp.

Those ugly space aliens from the doomed Third Planet of the Black Hole system (from the previous film, Godzilla vs. MechaGodzilla) have returned and created a new mecha-monster with the head of the original robot, which Godzilla had destroyed. However, to avoid the prior pitfalls of a purely robotic construct, they opt to use a living being as its control center, in the person of Katsura Mafune (Tomoko Ai), the daughter of disgraced scientist Shinzo Mafune (Akihiko Hirata), who was cast out of the scientific community because of his radical beliefs about mind control and the existence of a dinosaur called Titanosaurus. Mafune is happy to help the aliens because they have saved Katsura's life on more than one occasion—in effect, turning her into a cyborg. Katsura herself is ambivalent until she finds herself attracted to Professor Ichinose (Katsuhiko Sasaki), who is leading the search for Titanosaurus. The Black Hole guys unleash MechaGodzilla and Titanosaurus on Tokyo, but Godzilla appears to tangle with them, and Katsura is electrocuted. Once again, the Black Hole guys restore her, but now she is more mechanical than human. Ichinose has faith in her humanity, however, and in the end, she kills herself, allowing Godzilla to destroy MechaGodzilla II. Dr. Mafune is killed as Ichinose and Interpol destroy the aliens' base. Titanosaurus falls into the sea, and Godzilla returns to Monster Island, or wherever he happens to reside at this go-round.

The people scenes in Terror of MechaGodzilla to some extent mark a return to the familiar Honda style of direction, with a far grimmer atmosphere than any of the films since Godzilla vs. Hedorah. Akira Ifukube's score adds an element of the eerie in numerous scenes, and his powerful MechaGodzilla and Godzilla themes, the latter of which is based on motifs from the original Godzilla, inject a note of seriousness completely absent from other entries in the late Showa-era series. While the scenario is completely outlandish, an undeniable air of tragedy hovers over Katsura, who is at once villain and unfortunate victim of the story.

Sadly, a disproportionate number of the monster scenes fall back on the goofball antics of the previous films with effects directed by Teruyoshi Nakano. Time after time, Godzilla appears as nothing more than an empty suit, getting tossed and bounced around like a helium balloon, to such embarrassing effect that even Ifukube's majestic score can't salvage the scenes. In fact, they're prevalent enough to spoil the entire picture, leaving such a bad taste that it's hard to appreciate many of the finer scenes, such as Godzilla staggering against the powerful wind whipped up by Titanosaurus's tail; or MechaGodzilla II and Titanosaurus marching side by side, razing everything in their path; or MechaGodzilla II unleashing an awesome barrage of missiles that blow a city block literally sky-high. The laughable scenes are so incompatible with the tone of the movie that, even having some understanding of how Japanese audience's expectations differ from their western counterparts, I still find the reasoning of the moviemakers utterly inexplicable. A touch of comic relief is one thing; total incongruity is another.

It doesn't help that the Godzilla suit, while a little fiercer looking than its previous incarnations in Godzilla vs. Megalon and Godzilla vs. MechaGodzilla, still resembles a Muppet more than the King of the Monsters, with big, balloon-like dorsal fins and oversized, rounded feet. Titanosaurus's design is interesting enough, with fish-like fins that give it the distinct appearance of a sea animal. MechaGodzilla II, similar in appearance to the original, with a few modifications, certainly makes for an impressive mecha-monster, and in most cases, its movements are convincingly mechanical.

The Classic Media DVD includes the original, uncut Japanese version and the extended U.S. version originally released by Henry Saperstein directly to television. The Bob Conn Enterprises theatrical version, which saw only limited release in 1978, was originally known as Terror of Godzilla and was significantly edited to excise scenes of violence (and the infamous scene of Katsura's naked, obviously artificial breasts)—so much so that the ending makes no sense whatsoever. Interestingly, Saperstein's television version retained these scenes, which runs counter to expectations from that day and age, when it was typically television releases that were so heavily edited.

The Classic Media DVD release, of course, is a big winner. It does the movie justice and then some. 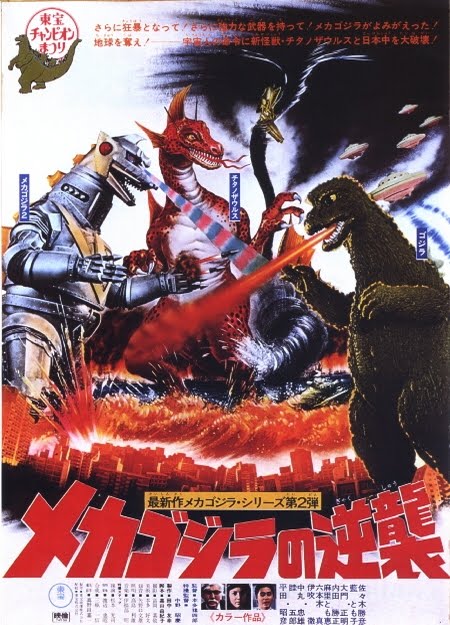 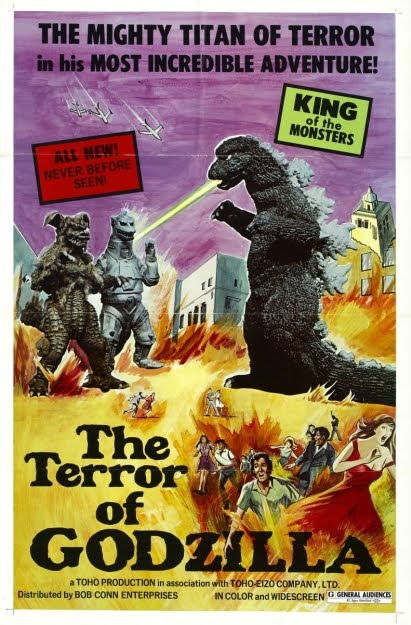 Posted by Stephen Mark Rainey at 2:02 AM