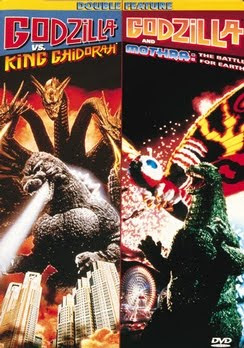 Back in 1991, Godzilla vs. King Ghidorah created something of a stir on this side of the water because there were rumblings that the film had distinct anti-American overtones. However, it would be several years before it received a domestic release (which was straight to video), and overall, the American audience found the fuss to be much ado about nothing.

For fans, the far bigger deal about Godzilla vs. King Ghidorah was Ghidorah's new origin and the convoluted storyline, which took the theme of time travel to new heights of ridiculousness. No longer an awesome, planet-destroying monster from space, Ghidorah is now the product of a weird combination of time travel, small critters, and radioactivity. The story goes like this: a time-traveling flying saucer lands in Japan in 1992, bringing with it an international crew from the year 2204. They claim that, in their age, Godzilla is running rampant and must be destroyed. They have discovered that Godzilla was birthed on a Pacific Island called Lagos during the U.S. nuclear experiments, so their plan is to go back to that time and move the dinosaur that will eventually become Godzilla to a new location. They succeed in doing this; however, they leave behind some cute little doothingies called dorats, or drats, which have features that suspiciously resemble King Ghidorah. And in the 20th century, Godzilla is gone from history (even though everyone somehow remembers him), and King Ghidorah has replaced him. Shock of shocks! The future people have planned all along not to save Japan but destroy it, thus preventing it becoming the dominant economic and political world power.

However, in the 20th Century, radioactivity apparently exists in profusion in every corner of the world, and in the Toho universe, radiation plus critter equals daikaiju. So the dinosaur is once again transformed into Godzilla, even bigger and more powerful than before. Godzilla and Ghidorah battle, and Godzilla prevails, casting Ghidorah's body—now minus one head—into the ocean. As Godzilla begins a devastating attack on Japan, future person Emi, who disapproves of her people's motivations, returns to the future, has the dormant Ghidorah reconstructed as a cyborg, and then returns it to the 20th Century to do battle with Godzilla. This time, Mecha Ghidorah whoops on Godzilla sufficiently to send him into the ocean, but in the process the cyborg is terminally damaged and sinks into the ocean as well.

With rare exception, I've never cared much for time travel stories, and after the relatively dark, disaster-themed scope of Return of Godzilla and the nightmarish topicality of Godzilla vs. Biollante, the fantastical excesses of Godzilla vs. King Ghidorah come off as outright silly—particularly its half-baked time-travel aspect. Beyond that, the alteration of King Ghidorah's origin—making it, in essence, a Godzilla changeling—serves to void the metaphorical power of the original Godzilla story; in essence, diminishing Godzilla himself. As a powerful alien entity from the stars, King Ghidorah worked. As the mere tool of an advanced but decadent future civilization, a deliberate product of technology, it falls flat on its face.

On the flip side, despite its very serious dramatic shortcomings, the pacing of the film is among the best of the Heisei series. The cinematography is colorful and well composed, and Akira Ifukube's powerful score, which reprises the original Ghidorah theme, is beautifully orchestrated. The Godzilla suit, only slightly modified from its design in Godzilla vs. Biollante, appears very impressive. Surprisingly, despite a Western cast with the acting ability of elementary schoolchildren, the backstory of the "Godzillasaurus" on Lagos Island plays out remarkably well. Yoshio Tsuchiya, portraying loyal-Imperial-Japanese-soldier-cum-industrial-magnate Shindo, turns in a superlative performance, and with Ifukube's score providing a poignant backdrop for his character, almost single-handedly elevates the movie to respectable status.

Whatever its failings, and they are many, Godzilla vs. King Ghidorah does succeed at being an entertaining movie, and when it comes to portraying Godzilla as a truly powerful, virtually unstoppable force of nature, it hardly gets any better. 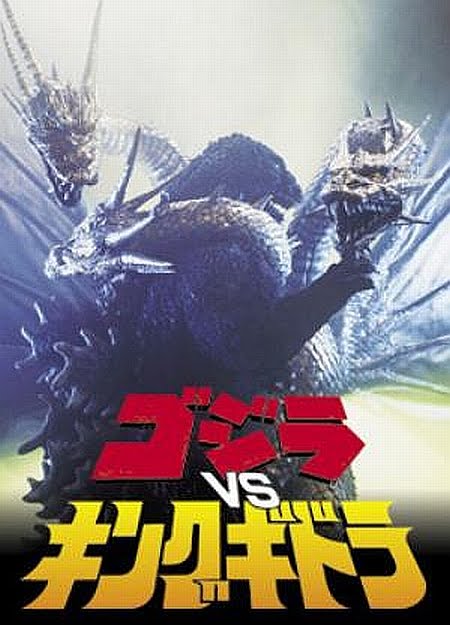 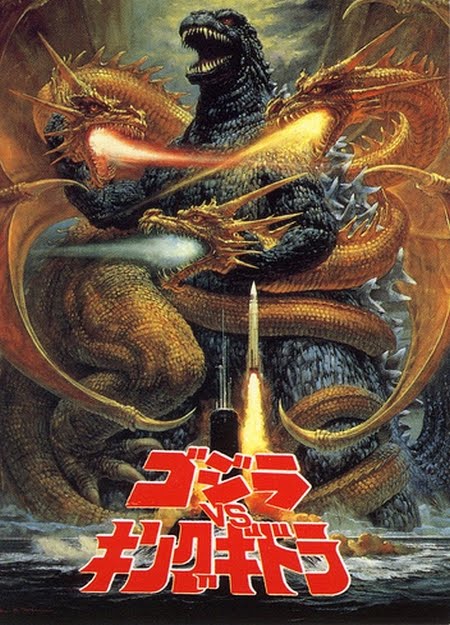 It would be fascinating to read a novel set in a universe of giant monsters. I can imagine reading:

John cruised along, trying to recover from losing sleep the night before. Suddenly the radio crackled and a serious-sounding announcer broke through:

"If you are planning on driving anywhere in the downtown district in the next hour or so, please be aware Godzilla has resurfaced in the harbor. While at this time it is unknown if he will move inland, drivers are being asked to seek alternative routes so emergency vehicles will be able to meet needs as they arrive."